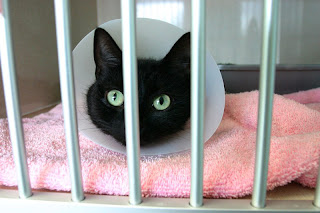 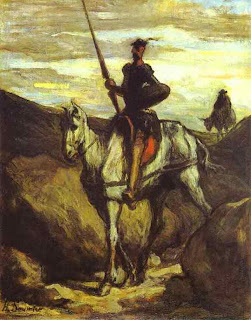 "Two texts of unequal value inspired [his] undertaking. One is that philological fragment by Novalis--the one numbered 2005 in the Dresden edition--which outlines the theme of a total identification with a given author. The other is one of those parasitic books which situate Christ on a boulevard, Hamlet on La Cannebière or Don Quixote on Wall Street. Like all men of good taste, Menard abhorred these useless carnivals, fit only-- as he would say--to produce the plebeian pleasure of anachronism or (what is worse) to enthrall us with the elementary idea that all epochs are the same or are different. More interesting, though contradictory and superficial of execution, seemed to him the famous plan of Daudet: to conjoin the Ingenious Gentleman and his squire in one figure, which was Tartarin . . . Those who have insinuated that Menard dedicated his life to writing a contemporary Quixote calumniate his illustrious memory.

He did not want to compose another Quixote -- which is easy -- but the Quixote itself . Needless to say, he never contemplated a mechanical transcription of the original; he did not propose to copy it. His admirable intention was to produce a few pages which would coincide -- word for word and line for line -- with those of Miguel de Cervantes.

'My intent is no more than astonishing,' he wrote me the 30th of September, 1934, from Bayonne. 'The final term in a theological or metaphysical demonstration--the objective world, God, causality, the forms of the universe -- is no less previous and common than my famed novel. The only difference is that the philosophers publish the intermediary stages of their labor in pleasant volumes and I have resolved to do away with those stages.' In truth, not one worksheet remains to bear witness to his years of effort."
- posted by cjb @ 8:02 PM
Thursday, June 19, 2008

This is your chance to believe -- super high-quality audio and video, from the 2006 tour with Michael McDonald.

Working retail for any length of time provides ample evidence of people's endless weirdness, and also makes you instinctively distrust your fellow man-and-woman. Case in point:

GUY WITH BOOKS: Here, I'm giving these to you!

GWB: Yeah, I bought most of them here, but I don't want anything for them!

CJB: Thank you. Thanks, man.

[GWB disappears into the stacks; CJB examines the windfall]

THE VERDICT: Books originally purchased from us, now totally trashed and unsuitable for anything but the dollar table.

GWB [returning to the counter with a stack of desirable cool stuff]: Say, can I take these? I mean, for that stuff I gave you?
- posted by cjb @ 6:32 PM 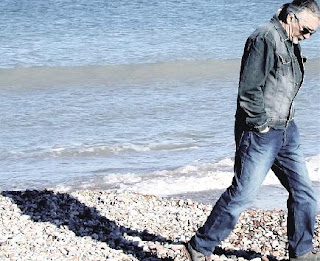 "Landscape was the resource of my childhood. I love the light on the world, the look of things. I love any writer who has a sightline on that, even Kipling. To Yeats or Arthur Machen the light on the landscape was a promise of immanence, something more than the world; whereas to Robert Macfarlane the light on the landscape is enough. It doesn’t need to imply anything (although he talks of 'gateways'). We were made to be in light and air. I get excited by other landscapes but I like Britain best. Seaside, moors, mountains, fields. It’s a strength to be able to stand for an hour, watch the light and shadow on the water, let the anger drain away, not be the author of something like Light."
- posted by cjb @ 6:04 PM 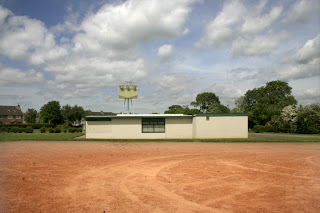 Sylvia Grace Borda checks in from a recent Holiday in Glenrothes
- posted by cjb @ 5:09 PM 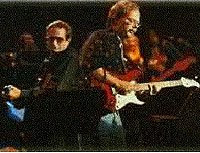 'cause everyone over on the Blue Book's playing "Fantasy Setlist":

Instrumental medley of Everyone's Gone to the Movies, The Fez, The Royal Scam (band only)
Continuation of The Royal Scam, with Walter and Don
Time out of Mind
Everything You Did
What a Shame About Me
Here at the Western World
Barrytown
Godwhacker
Babylon Sisters
New Frontier
Gaucho (Walter Becker vocal)
Glamour Profession
The Caves of Altamira
Black Friday
Green Earrings
Don't Take Me Alive
Pretzel Logic
Love is Like an Itching in My Heart / Band intro
IGY

Dru says, "You ate what?" and relays this useful information:

"Lysichiton is a member of the Arum family and related to a Polynesian staple food taro. While edible, Lysichiton americanus is high in calcium oxalate which produces stinging or burning in the mouth when chewed raw. And in the digestive tract, it creates a sensation described as 'hundreds of needles being stuck into it.' While bears forage on its roots, which serve as a cathartic after long winter hibernation, humans typically will dry or thoroughly cook the plant before eating it. "

I thought the several leaves I thoroughly sauteed and chewed were tasty, if peppery, but your mileage may vary. Please don't email me from emergency to complain about your acute gastric distress.
- posted by cjb @ 3:09 PM

Killjoy Cooking With the Dungeons and Dragons Crowd -- via dru

"Posted: 12:42 a.m. by Kathraxis Hey, I have a question! When you preheat the oven, can you start it before you measure out the ingredients, or do you have to do it afterward? Please answer quickly, my friends and I have been arguing about it for four hours and we're getting pretty hungry.

Posted: 1:52 a.m. by IAmEd As I have pointed out MANY TIMES, several of these recipes contain raisins, and I, like most people, am ALLERGIC to raisins! And before you tell me to substitute dried cranberries, I will reiterate that I am discussing the recipes AS WRITTEN. I do not appreciate your ATTACKING ME with helpful suggestions!

Posted: 1:08 a.m. by jvmkanelly Where are the recipes for chatting with friends while cooking? Where are the recipes for conversation over the meal? When I throw a dinner party, I want it to be a PARTY. I guess the idiots who use the Better Joy Cookbook just cook and eat in stony silence, never saying a word or even looking each other in the eye."
- posted by cjb @ 1:59 PM 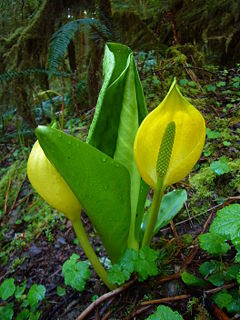 Lysichiton americanus, aka dinner. Lots of these guys up the Mamquam. Spurred by a (dim) memory of one of my native plant books describing them as edible, I took the Seabus over to North Vancouver and harvested a few leaves from the Mosquito Creek watershed. Back home, I chopped the greens into chunks and briefly sauteed them with olive oil, garlic, and cracked black pepper. Surprisingly good; kind of like a mustard-spinach cross, with definite bite. As it turns out, the native plant book recommends eating the roots and using the leaves for food storage. Also on last night's menu: radish tops, spurred by feeling guilty about putting 90% of the plant into the compost heap. These guys benefit from finer chopping and longer sauteeing, but they're perfectly edible, and equally peppery. 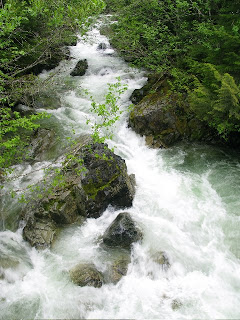 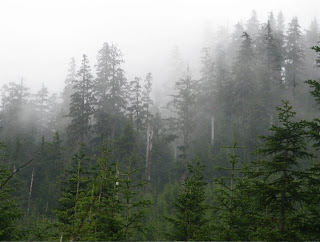 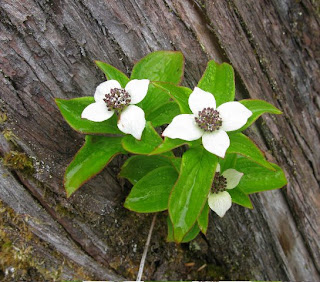 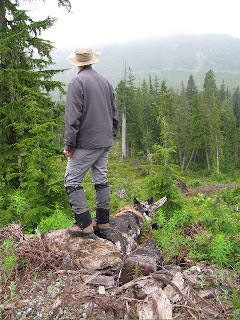 "Wanderer overlooking a sea of fog," upper Mamquam River Valley, British Columbia. Photograph courtesy Mick Range. Roughly eighteen miles east of Squamish, just west of the Mamquam/Pitt divide. Mr. Range and I drove up from Vancouver through the steadily growing gloom with the hopeful and somewhat naive plan of climbing Pinecone Peak, just east of here. Rain began to fall about the same time we parked beside a totally overgrown spur road. I could actually hear the drops sizzling in the dust as I wiggled into my boots and gaiters and psyched myself up to get wet. Piles of fresh bear and cougar scat everywhere. Ten minutes up in the bush, rain still falling, we determined we were on the wrong road. Down to the car, fifteen minutes' drive, back up another, even more completely overgrown road. Twenty minutes later, pushing through an alder sea, we heard a deep glottal rumble that we took at first for thunder. But thunder comes from the sky, and this growl was coming from the bushes. . . .

They call them "apex predators" for a reason, and the ursus-to-English translation was unmistakable: "Get the fuck out of my yard!" We hoofed it back down the road, and the growler saw no reason to pursue us, or to even put in an appearance. But that sound, deep and Dolby-bass grumbly, will stay with me for a while.

Up the logging road again, wiggling my two-wheel drive Taurus back and forth over a series of water bars. Then up a side road, rain coming down harder now, into a clearcut. We headed up to the top of the cut, then bushwhacked straight down to the car. The most prolific cut I have ever hiked through, bursting with flowering plants and mushrooms. Mick's photographs (above) look like they were taken with a polarizing filter; the plants' green is unearthly, unnaturally bright. But these are the colors we actually saw. A weird conjunction of deep black duff; productive rainfall; the peculiar microclimate of the upper valley's south-facing slope.
- posted by cjb @ 9:02 AM