YOUNG WOMAN: Do you have the Feeldo?

CJB: What is the Feeldo?

YW: I thought I maybe read online that your bookstore sells sex toys?

CJB: Uh, no. Maybe try Womyn's Ware on the Drive. 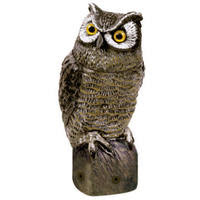 "THE ASSOCIATED PRESS HOUSTON - NASA engineers are trying to identify an object seen floating away from the Discovery on Friday, a day before the space shuttle is scheduled to return to Earth.

The engineers are also analyzing a protrusion sighted on the shuttle's rudder."
- posted by cjb @ 10:53 AM

All Aboard the Carib Cannibal

"DONALD FAGEN: I actually suggested to Walter that we start doing little critical monographs on other directors but he thought it would be too repetitive. And I understand; I don’t like format either. Once you start getting into a format you get stuck sometimes. But I was ready to start giving advice out all over the place to various artists."

"WALTER BECKER: When we first started to do this kind of stuff, and when Donald and I were writing songs and showing them to people, I sang a lot of the songs because I sang much louder. I liked to sing. Donald was sort of playing the piano and hunched over the piano and didn’t sing as loud. It was only when we actually really got in the studio and I heard his voice and heard my voice that I realized what a great singer he was and what a shitty, out-of-tune singer I was. Now, at that time I was smoking two or three packs of Camels a day. Not to say that I still don’t have problems with that, but I just didn’t have that pitch thing down. And when you get to the point of recording, that really counts. And I saw that Donald had a really cool style, and that he could do all kinds of fancy intervallic things, and as we later discovered a little further down the line, he could create these stacks of harmonies that really added a lot to what we were doing. And not everybody can do that; he can do it partially because of the precision and repeatability of what he does. He can double his own voice because he basically sings the song the same way every time: He has a perfect picture in his mind of what the song is going to be."
- posted by cjb @ 10:24 AM 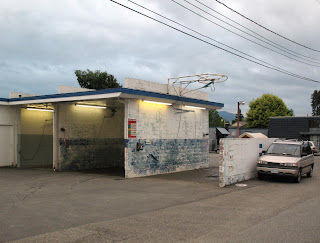 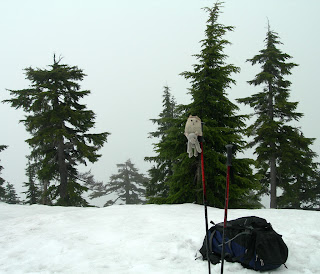 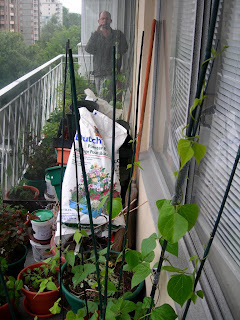 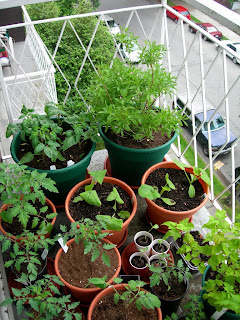 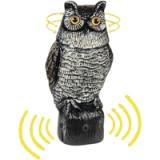 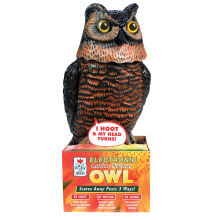 So maybe by the time the Duo reach Woodinville, WA for their two-night stand we'll hear (in addition to Glamor Profession, already well worth the drive): 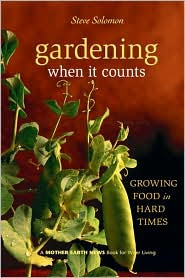 You and I
know
the world
can't be
like this--

I'll be 38 in the morning. Pulpfiction will be 8 as of 11am. I'll be on a North Shore trail with the cats, gone to show an internets friend some big trees.

A pleasant day mostly spent repotting tomatoes and reading (qv. above) on the balcony, surrounded by small living things and the not-unpleasant smells of fish fertilizer and rock phosphate. A bit of a surprise to the pigeons who showed up, mid-afternoon, in search of a quiet place to nest.

And, for the record, 'cause I won't be around tomorrow: thanks to all of you from difficult me, for your love and friendship. I don't know if you know that it makes a difference to me -- given my odd touchy head, it's always hard to tell -- but it does: the net-chats; beers; the fine examples of your art(s); the walking; photographs; mountain climbing; music; business-building; companionship; and (last but never least) the cats. So, thanks from me to all of you who sustain me and lift my hard but never unrewarding days. Thanks!
- posted by cjb @ 8:57 PM
Tuesday, June 10, 2008

I Can Has Job?

Today's entry baldly plagarized from Mr. James Nadiger's Livejournal. I've been wanting to write an entry like this for ages, but JN has done a far, far better job of it.

"It's the beginning of summer and rank, desperate capitalism is in the air: It's resume season!

Wave after wave of young men and women descend upon us like destitute lemmings, eager to find employment for the summer, and bring us their carefully typed sheets of paper, filled to the brim with poems and songs of their heroic exploits of jobliness.

So far, my favourite was the kid who, under 'Skills' said: 'Fashionable: I add Style to the work place.' The kid was like, fourteen years old, and had previously added style to Buy-Low Foods.

Today, another hopeful stepped up to the plate:

Are you guys hiring? No.

Is it worth my while to leave a resume? Not really, unless you have bookstore experience, or some kind of retail equivalent. Do you?

No, but I'd really like to work here, all I've applied to are bookstores, and I'm a pretty smart guy. Well, go ahead.

Here is the best part of his cover letter (bold is mine), which proves, without fail, that most people don't understand bookstore life:

I am hoping to find a calm and friendly atmosphere in which to work. Having a penchant for sound, music and filmmaking, I have determined that working outside of those industries is the best way to remain enthusiastic and passionate for them. With a coolheaded and lively demeanor, interacting with customers and co-workers is always a pleasure. I take pride in my ability to trust and be trusted, and am excited to dedicate myself as a reliable employee to your business.

Instead of SKILLS, he had a SPECIAL ABILITIES section, which I thought was cool, in a super-hero trading card kind of way, and one of this guy's special abilities is 'beatboxing.' He can also play the jaw harp, penny whistle, and didgeridoo."
- posted by cjb @ 11:43 AM 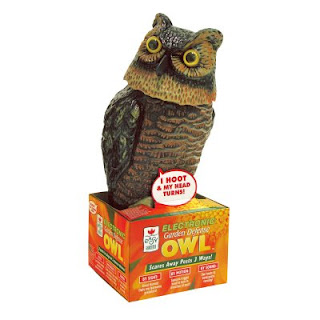 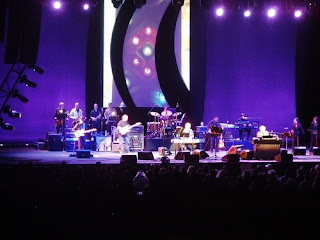 Instrumental medley of Everyone's Gone to the Movies, The Fez, Royal Scam (without DF and WB)

Continuation (with vocals, as DF and WB enter stage) of Royal Scam

I Got The News

What A Shame About Me (sung by Jeff Young)

Parker's Band (sung by the girls)

WB band intro, over a cover of the Supremes' Love Is Like an Itching In My Heart

Just Some Little Shit in Love With Your Eyes

Rain overnight, the brisk west wind whipping and teasing long trellisses of cloud all out across the harbor and the southern tip of Bowen Island. Raindrops on the deep green leaves of the big maple tree on the corner. Laying my hand against its thick gnarled trunk. Moss-bearded, russet and lime. Sunday's empty streets: scattered applause from the triathalon crowd with its Pentaxes and slick black Gor-Tex "shells." Cell cameras capturing all the action: lathered cyclists rounding the tight corner onto Davie, tires slipping on the wet pavement.
- posted by cjb @ 10:44 AM