"[I]t is the wandering 'circuit pickers,' as typified by Nancy and her kin, that intrigue me the most, for they are quintessential outsiders: figuratively, because they stand outside the mainstream, and literally, because they spend most of their waking existence outdoors. They are the latest (some say the last) incarnation of a wandering community as ancient as humanity itself—one that is nature-immersed and moves with the seasons, dispersing and coalescing as conditions dictate. Knowledge is acquired through days spent in the woods and is communicated orally. Respect in this traveling community is won through the expertise that flows from that knowledge; trust and camaraderie are cemented and sustained through the exchange of nature—the buying, selling, and bartering of mushrooms—and just as importantly, from the exchange of stories about nature and mushrooms."
- posted by cjb @ 8:00 PM 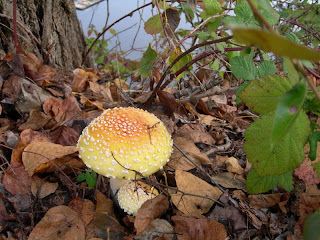 "Introduction to Fall Mushrooms features some of the many large, showy edible and poisonous basidiomycetes that might tempt the budding mycophagist. The mushroom shown as a backdrop here is Amanita muscaria var. muscaria, one of the most beautiful and tasty poisonous species. Because it is abundant, large and beautiful with a pleasant taste, many people eat Amanita muscaria each year. Most eat Amanita muscaria in error and wind up experiencing intoxication, nausea, muscle spasms, staggering, vomiting and diarrhea usually followed soon by a deep coma-like sleep and recovery within 24 hours. A few eat it intentionally for its mind-altering effects. Amanita muscaria is, after all, the mushroom of Alice in Wonderland - one bite makes you big, another makes you small, another changes time."

Friends I found at Kanaka Creek:

* Some old boletes, too decayed to properly identify

Handed-in-to-the-gallery version of a short essay on RBC Painting Competition winner Arabella Campbell. "Why don't you write art criticism any more?" Well, I do, but slowly. Thanks to Constant Reader Doug French for the careful proofreading.

Arabella Campbell’s paintings announce their blunt facticity with as little stylistic embellishment as possible. Which doesn’t mean they’re devoid of expressive content. As American minimal art of the 1960s definitively proved, the more sharply limited an art work’s expressive elements are, the more strongly they will figure in whatever aesthetic effect the work creates. The burnish and lustre of Carl Andre’s lead and copper panels; Donald Judd’s plain plywood boxes and serial arrangements of brushed aluminum and colored plexiglass; and the softly colored haloes surrounding Dan Flavin’s arrangements of fluorescent lighting fixtures demonstrate that minimal art did not renounce visual expressivity, not exactly, but reorchestrated it in a minor key. Minimal art enabled the perception of aesthetic possibility – beauty – in materials that had not previously, nor ever seemed particularly likely to possess high art associations. Similarly, Campbell’s paintings call attention to the previously unappreciated aesthetic qualities of the support materials of painting – canvas and linen fabric; wooden stretcher bars; white underpainting -- or, in other words, to all the elements of the prep-work required to clear an “empty” space, a neutral ground prior to whatever is subsequently inscribed on or laid down upon it. The “physical facts” of painting’s supports are the subject of Campbell’s practice, a practice that largely produces blank or monochrome paintings. This is an unconventional but not totally out-of-the-ballpark idea; it is one that was anticipated and accepted, albiet less than happily, by Clement Greenberg in 1962: “By now it has been established, it would seem, that the irreducible essence of pictorial art consists in but two constitutive conventions or norms: flatness and the delimitation of flatness; and that the observance of these two norms is enough to create an object which can be experienced as a picture – though not necessarily as a successful one.”1

Greenberg’s caveat – that a blank canvas already exists “as a picture” – as art, if not necessarily good art – is worth considering for its implications for Campbell’s practice. Greenberg recognized, I think, that morphological criticism (criticism based or rooted in cataloging an artwork’s physical properties) is descriptive, not evaluative. Morphological criticism establishes certain straight forward “physical facts” about works of art: Work X is such-and-such a size, say, and consists of a linen surface, and wooden stretcher bars, and multiple coats of flatly applied white acrylic paint. All this criticism does is describe the work. It doesn’t judge it. How could it? An art work’s aesthetic success or failure can never be rooted in specific physical characteristics or properties, for, if this were in fact the case, it would be possible to determine an artwork’s aesthetic success or failure in advance from a list of those properties, a prospect which Greenberg presciently, and unhappily addressed in 1974: “Did we know specifically what classes of properties and what degrees of such properties always made for superior art, we’d be able not only to prove and infer esthetic judgements, but also to know in advance what kinds of properties superior art would always have, and have to have. From this it would follow that anyone who informed himself [sic] enough would be able to create superior art at will, deliberately; and he [sic] would be able to decide beforehand just how superior to make it. The making, like the appreciating, of art would be reduced to a matter of codified selective procedures that were as learnable as those of accountancy.”2

For example, Art and Language’s black monochrome, Secret Painting (Ghost) (1968), is accompanied by a didactic text asserting, “The content of this painting is invisible….” Similarly, in 1967 and 1968, John Baldessari hired professional sign painters to inscribe phrases like, Everything is Purged From This Painting But Art, No Ideas Have Entered This Work, on lightly gessoed canvases. The work of local artists like Ian Wallace and Ron Terada is also relevant to Campbell’s practice. Wallace pairs painted monochrome panels with photographs; the monochrome signifies an aspect of the work that either escapes photographic representation or exists in tension with it, as, for instance, the allegorical signification of social forces that shape and contain behavior. Thus, the individual particularity of each of Wallace’s friends depicted in a series like My Heroes in the Street (1986), contrasts with the architecture of the surrounding polis, a signifying system represented photographically as glass doors; street signage; mall escalators and shop windows, but also indirectly, as flatly painted panels that allude to ideological forces that work in and through objects. Similarly, Ron Terada’s monochrome fields represent – at least to me – the “weak” persistence of the art-historical genres parodically cited by the texts Terada superimposes on top of them (Personals ads as portraits; gallery ads as portraits or still-life paintings; Jeopardy! questions as history paintings).

Campbell’s paintings similarly transform the “painting degree zero” of the blank or monochrome canvas. Her works’ surfaces are usually not blank, but covered with pigment, though that pigment often mimicks the color and texture of the surface beneath it. These repetitions take the materials of painting as the subject of painting; they repeat them. Repetition is a way of slowing something down, suspending it, putting it in quotation marks, or subjecting it to what Duchamp called a delay. In Campbell’s case, I think these repetitions are a way of probing painting’s deep, or hidden structure. Campbell systematically examines each part of the painter’s practice, just as someone learning to speak a foreign language might start by sounding out syllables, then words, and finally combining them to create sentences and meaning. This is a intellectually and aesthetically rigorous approach to artmaking, and one whose unfashionability was clearly displayed in the Vancouver Art Gallery’s recent group exhibition, Paint, where the rigorous beauty of Campbell’s work sharply contrasted with the neo-expressionism, realist watercolors, “mixed media” painting-sculpture hybrids and lumpy cartoon abstraction of the other participants, which proceeded as if conceptual art’s interrogation of painting in the late 1960s had either never existed, or had simply been wished away. Campbell’s probing investigations of the materials of painting could not have looked more out of place alongside the hectic, everything-but-the-kitchen-sink stylistic promiscuity characterizing the rest of the exhibition, an important reminder that while the example of Duchamp’s readymades authorized artists to “do whatever,” he did not neccessarily prescribe “everything simultaneously.”

Looking at Campbell's work takes time. The longer you are prepared to stand and wait, the more you recognize (with pleasure!) effects that you might have originally ignored: the soft green glow that floats along the top edge of a large white monochrome triptych, or the very slight variations in luminosity that are visible after long study of two identical panels painted with slightly different shades of white pigment. At Campbell's Catriona Jeffries show, these immensely subtle painterly effects were deployed in amongst a welter of other artworks: photographs, monochrome sculptures, videos, and gallery ephemera (press releases; origami boxes made from recycled invitations). There is more than a whiff of defensiveness to these otherwise visually engaging and formally playful objects. They bracket the paintings, as if to announce that their creator is not only a painter, but an artist-in-general, someone whose thoughtfulness and talent extend across media. They also testify to the fact that the creator of the paintings is someone with a sense of humor, revealing Campbell's wry appreciation of the systems- or process- based aspect of her work, which recalls, at least to me, Sol Lewitt's, or, more accurately, Mel Bochner's. The non-paintings -- the photographs of fishing boundary markers, say, or the exemplary video loop Generator Garden, which is simply a very long exposure whose length is continuous with viewers' own time-based experience of it -- testify that the paintings' spareness has been carved out of the clutter of the rest of the art -- and, by extension, the rest of the physical world -- only with great focus and concentration. The non-paintings are "art gestures" that point to the paintings' precariousness, indicating that they have been won back only at great expense from a larger, more cluttered world. The photographs, videos and sculptures purport to be autonomous but to exhibit them on their own would be, I think, to miss the important work they perform. They are better seen as a context for the paintings, other inhabitants of the world the paintings live in. They signify that Campbell is an artist who not only composes in paint, but in multiple dimensions and across media, to produce a kind of hybrid installation art of which painting is just one component, an art as complex as the tangles and thickets it emerged from, which it only purports to hold at bay.

Both the portfolio and the the benchmark index slightly gained over this first three-month period, but the index slightly outperformed the portfolio, leading to a negative relative result. I judge my performance over a rolling three to five year period, as you should, so this slow start doesn't bother me, and shouldn't bother you, either. I will post a more detailed breakdown of the stats some time in the next day or two for those few readers who are keeping tabs, perhaps even more closely than me.

What Ails the Short Story

"Last year, I read scores of stories that felt ... not quite dead on the page, I won’t go that far, but airless, somehow, and self-referring. These stories felt show-offy rather than entertaining, self-important rather than interesting, guarded and self-conscious rather than gloriously open, and worst of all, written for editors and teachers rather than for readers. The chief reason for all this, I think, is that bottom shelf. It’s tough for writers to write (and editors to edit) when faced with a shrinking audience. Once, in the days of the old Saturday Evening Post, short fiction was a stadium act; now it can barely fill a coffeehouse and often performs in the company of nothing more than an acoustic guitar and a mouth organ. If the stories felt airless, why not? When circulation falters, the air in the room gets stale."
- posted by cjb @ 9:31 AM
Sunday, September 30, 2007 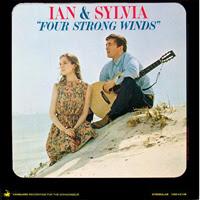