"There's a poem by Burns, the great Scottish poet, where he urges Scots to work hard, even connive, to get a glorious independence. You don't have to listen to me very long to know my views wouldn't be welcome everywhere, so I decided I needed glorious independence, which required that I be a man of independent means. I didn't buy a new car until I was about 60 and I was very rich before then. I wanted independence for the same reason George Bernard Shaw sent his mom out to work: I wanted to make a mental man of myself. Warren kids me about this."

Q: Sir, Israeli opposition leader Netanyahu has now spoken openly about Israel's bombing raid on a target in Syria earlier in the month. I wonder if you could tell us what the target was, whether you supported this bombing raid, and what do you think it does to change the dynamic in an already hot region in terms of Syria and Iran and the dispute with Israel and whether the U.S. could be drawn into any of this?

Q: Did you support it?

THE PRESIDENT: I'm not going to comment on the matter.

Q: Can you comment about your concerns that come out of it at all, about for the region?

Fortunately, the Observer has helpfully lifted the veil behind the Decider's stonewalling. A story that deserves everyone's close attention, one poorly reported so far by mainstream North American media.
- posted by cjb @ 8:20 PM

Alan Greenspan and The Juice Discuss the Writer's Craft

GREENSPAN: —I couldn’t help but ask myself, How the heck did he come up with this? I mean, some of [your] stuff is really out there.

SIMPSON: I thought it would be interesting to put myself inside the head of a sociopathic killer—sort of like what Bret Easton Ellis did in American Psycho.

SIMPSON: When I was in the writing program at Iowa, one of my teachers—Raymond Carver, I think—said, 'Juice, write what you know.' But I think the only way to grow as a writer is to create a character who is the opposite of you, and ask, 'What makes that guy tick?'

GREENSPAN: I’m curious—if he’s the opposite of you, why did you name him O. J. Simpson?

"So, When Did You Finally Get Bored With Photography?"

Pulpfiction Books was selected today by the readers of the Georgia Straight newspaper as "Vancouver's Best Used Bookstore." Thanks to the anonymous readers who voted for us; to this year's staff and former staff (Chris Clarke; Keith Dunsmuir; Bonnie Jacques; Michael Young; New Guy [James Nadiger]; Katherine Davis); and to the customers and vendors who continue to arrive day after day, making this job the only thing outside of visual art and investing that's held my skittish attention for more than five consecutive years.
- posted by cjb @ 10:46 AM

Q: What good is a clarinet?

A: Wood for an accordian fire.

The orchestra's second viola bids his wife and newborn child a fond farewell and hops into his Honda Accord for a quick trip to 7-11. While he's gone, the orchestra's conductor breaks into the house, shoots the wife, drowns the newborn in the bathtub, dismembers both of them, and scatters the remains throughout the house and across the front lawn.

Second viola arrives home to find police cruisers in the driveway and all up and down the block; yellow crime scene tape strung everywhere; and a gaggle of appalled neighbors held back by uniformed police. "You can't go in there!" say the cops. "Why?" asks the second viola. So they tell him.

An art-world type made the assumption today that the Roger Lowenstein Buffett biography currently up as my staff pick was some exquisite form of irony, and was visibly discomfited to learn that its selection was essentially irony-free. Money doesn't really mean that much to me in and of itself; it's more like a score card. "The uniqueness of [Buffett]'s achievement is more significant in that it was the fruit of old-fashioned, long-term investing. Wall Street's modern financiers got rich by exploiting their control of the public's money: the essential trick was to take in -- and sell out -- the public at opportune moments. Buffett shunned this game, as well as the more venal excesses for which Wall Street is deservedly famous. In effect, he rediscovered the art of pure capitalism -- a cold-blooded sport, but a fair one." (Lowenstein). I have been trying to monetize the inside of my head for the better part of twenty years, not to Get Rich Quick, but to facilitate escape. I like the idea of being paid to think, minus the distractions of the tenure committee, Head Librarian, Chief Curator, Editor, W.H.Y. "Like Warren, I had a considerable passion to get rich. Not because I wanted Ferraris -- I wanted the independence. I desperately wanted it. I thought it was undignified to have to send invoices to other people. I don't know where I got that notion from, but I had it. I had lived way under my income for years, saving money." (Charles Munger).

If I vanish one day, please understand.

CJB [completely startled]: Are you OK?

Scrambling up a stack of papers directly behind me. Cute, but not cute enough to prevent me half-heartedly swiping at the little fucker with the broom, hoping for a clean kill with the first blow. But Speedy Gonzales jinked left around my half-assed shot and fled down the trade fiction aisle, little legs windmilling away like crazy. 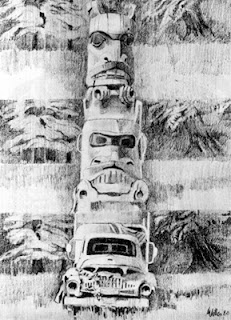 I wrote about Jim's work twice; once for Artichoke magazine, and once in an catalog for the Richmond Art Gallery (Out of The Garden: The Contemporary British Columbia Landscape, the first visual art exhibition I ever curated). I also commissioned a small watercolor from Jim some time in the early 1990s, thereby fulfilling a promise I originally made to him in grade 2 or 3. That painting, Very Like a Micro-Circuit #2, which depicts a fallen Haida mortuary pole slowly dissolving into organic computer circuitry, still hangs in my apartment's front hall, beside one of Sylvia's EK photographs and a Ron Terada painting of an Artforum ad for Thomas Struth.

Jim's obituary, from the Globe:

Beloved father, artist, sculptor, environmental activist and writer, Jim passed away peacefully on Sept. 6, 2007 at St. Paul's Hospital, Vancouver. Born in London, England in 1921, Jim studied at the University of Manitoba, the Hornsey School of Art in London and the Royal Academy of Amsterdam. His paintings are included in Permanent collections at the National Gallery of Canada, the Winnipeg Art Gallery, and the Vancouver Art Gallery. Jim exhibited his work for the National Gallery Tour in both 1953-54 and 1970-71. He won the Canadian Overseas Award in 1967 and from 1973-96 showed numerous group exhibitions and one-man shows at the Bau-Xi Gallery, Vancouver. Jim's science fiction novel Paramind written in 1967 won the Canada 2000 Award. A celebration of Jim's life will be arranged and announced in the future. He is survived by his three daughters Kathleen Willer of Coleman, Alberta, Xanthe Charov of New York City, NY, Sophie Reen of Greensburg, Indiana, by Chris Cavers (first wife and mother of Kathleen) and by seven grandchildren."

(Image: Jim's drawing Autotem, 1980, an excellent example of his thematic concerns (man-made objects transforming into animal spirits; into organic circuitry; into "thinking machines" capable of reflection on their own place in the world), but not, unfortunately, of the peculiar Vermeeresque brilliance of his watercolors)
- posted by cjb @ 10:20 AM