"He was a man who could find beauty in the small, hidden places that still existed on earth, the lost places that nobody had ever noticed. Michael was the stubbornest person she had ever known. He bore a resemblance to the explorers who had lived in earlier ages, and had been convinced that there was something wonderful still to be found on the earth."
- posted by cjb @ 7:37 PM 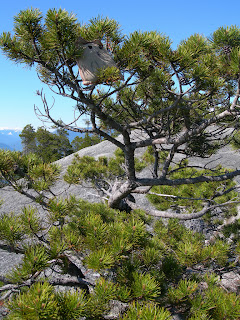 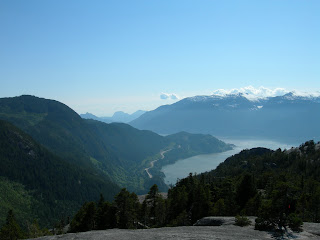 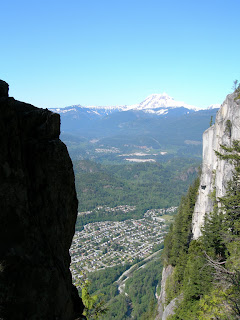 Looking down the North Gully to Valleycliffe and Mount Garibaldi in the distance. A thousand feet of air below.
- posted by cjb @ 9:28 AM
Wednesday, May 23, 2007

Potential Names For Evan's New Band -- quickly-fabricated "content" to tide everyone over while Team Cat and Keefer are off climbing tomorrow: 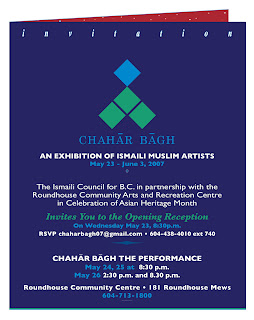 Exhibition featuring new drawings by my friend Mohamed Somani opening tonight at the Roundhouse in Yaletown
- posted by cjb @ 9:00 AM

HIPSTER NOT BOTHERING TO THINK THINGS THROUGH [to girl, viz. Afghanistan]: I hope every Canadian soldier over there takes a bullet in the fuckin' head!
- posted by cjb @ 7:24 PM 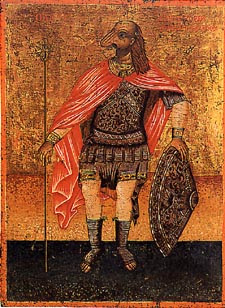 St. Christopher. Courtesy Jen. I can live with the dog's head, but the bald-on-top, mullet-down-the-back look has gotta go.
- posted by cjb @ 9:47 AM 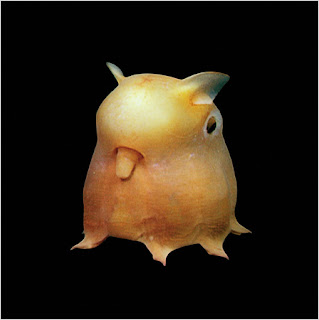 "On page after page, it is as if aliens had descended from another world to amaze and delight. A small octopus looks like a child’s squeeze toy. A seadevil looks like something out of a bad dream. A Ping-Pong tree sponge rivals artwork that might be seen in an upscale gallery.

Interspersed among 220 color photographs are essays by some of the world’s top experts on deep-sea life that reflect on what lies beneath. For example, Laurence Madin of Woods Hole Oceanographic Institution notes the violence that air and gravity do to creatures without internal or external skeletons when they are pulled up to the deck of a ship, obliterating their varieties of form and function.

'This unattractive jello-like mass,' he writes, 'is the unfair land version of amazing and delicate creatures that can display their true beauty only in their natural watery environment.' The photographs in the book right that wrong, and not just for jellyfish."
- posted by cjb @ 9:15 AM
Monday, May 21, 2007

"So here we are at the Brill Building, it's the late 1960s, and these two sullen, nondescript youths, fresh out of college, are hustling their songs around the various music publishers in the building. One has wire-rimmed spectacles, shoulder-length blond hair, and looks a bit like River Phoenix. The other is thin to the point of emaciation.

They troop into an office. The thin one sits at the office piano and opens an exercise-book of songs. Together, they sing one for the man behind the desk. It's about androids discovering they're alive, a bit like in that Philip K. Dick book. They sing another. It's about Charlie Parker, and is full of odd, show-offy changes. A third, a put-down of some place called Barry Town, makes good use of the spiteful undertone in the thin one's voice, but is too nasty. A fourth appears to be about a dildo -- it even mentions that Japanese one from the William Burroughs book. The man behind the desk sits there, nonplussed. What are these two kids thinking of? No-one wants to hear songs like this. Do they?

They troop out of the office, up the stairs and into another office."
- posted by cjb @ 7:14 PM

The Union Street Design Kids -- passing by out on the sidewalk with their scarves and weirdly fitted jeans. Light grey overcast, leaves stirring in the wind.
- posted by cjb @ 1:49 PM 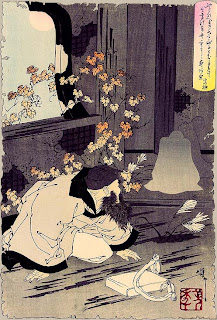 Yoshitoshi Tsukioka, The Priest Sogi Responds to the Two Ghosts, from the sequence, New Forms of Thirty-Six Ghosts (1889-92)
- posted by cjb @ 11:45 AM 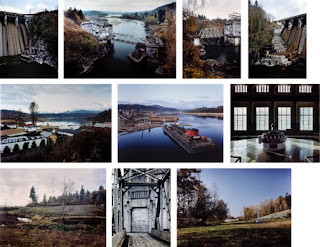 Stan Douglas' Pursuit, Fear, Catastrophe: Ruskin, B.C. (1992), a portfolio of ten photographs installed for a long time on the fourth floor of the Vancouver Art Gallery, where I used to visit it religiously every Thursday night. Pictures #8 and #9, in particular, are directly responsible for making me think about picking up a camera, however far removed they might seem from my pictures of street debris and my manky old car. There is a pretty great Robert Linsley painting, also of Ruskin, a small community on the north side of the Fraser River about an hour's drive east of Vancouver, permanently installed above the bookstore's till.
- posted by cjb @ 9:34 AM
Sunday, May 20, 2007

Pay No Attention to the Man Behind The Curtain -- yet another depressing installment, as Mr. Accountability once again ducks, weaves, and fails to take anything resembling responsibility for his subordinates' tightly scripted behavior. Worst US president ever, as Jimmy Carter charged a day or two ago? You bet. Richard Nixon looks like Cicero compared to W.

MSNBC REPORTER KELLY O'DONNELL: There's been some very dramatic testimony before the Senate this week from one of your former top Justice Department officials, who describes a scene that some senators called "stunning," about a time when the wireless -- when the warrantless wiretap program was being reviewed. Sir, did you send your then Chief of Staff [Andrew Card] and White House Counsel [Alberto Gonzales] to the bedside of John Ashcroft while he was ill to get him to approve that program? And do you believe that kind of conduct from White House officials is appropriate?

PRESIDENT GEORGE W. BUSH: Kelly, there's a lot of speculation about what happened and what didn't happen; I'm not going to talk about it. It's a very sensitive program. I will tell you that, one, the program is necessary to protect the American people, and it's still necessary because there's still an enemy that wants to do us harm.

And therefore, I have an obligation to put in place programs that honor the civil liberties of the American people; a program that was, in this case, constantly reviewed and briefed to the United States Congress. And the program, as I say, is an essential part of protecting this country.

And so there will be all kinds of talk about it. As I say, I'm not going to move the issue forward by talking about something as highly sensitive -- highly classified subject.
- posted by cjb @ 2:30 PM