Japanese mushrooming diary -- a year spent hunting wild edibles on the lower slopes of Mount Fuji. I like this site a lot, as much for its literary and scientific asides as for its detailed descriptions of fungi.

Guy Fawkes Day on the west coast, the western sky solid grey like the side of a piece of Richard Serra plate steel. Charles Manson lookalike grifting on the corner, "Hey, help out the homeless, got a bus ticket, got a smoke, spare change?" This charming six footer's panhandling methodology typically involves shambling up to someone smaller than him -- which in this neighborhood usually means a Vietnamese or Chinese grandmother -- and then standing right on top of them, flapping his arms up and down and blocking their path till they cough up enough to secure their release. "Fuckin' chink," I once heard him say to one grandma who wasn't emptying her purse quickly enough to suit him. That day I had the presence of mind to lay my umbrella right across his ass with all the swing as I could muster. A nice satisfying crack. 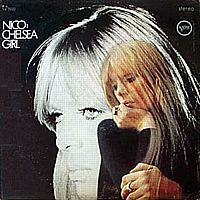 I've stopped my dreaming,
I won't do too much scheming
These days, these days.
These days I sit on corner stones
And count the time in quarter tones to ten.
Please don't confront me with my failures,
I had not forgotten them.

nst '99 -- first story I ever read by Kevin H., and still a favorite. Formatted kind of strangely for the web, but worth perservering.

Too tired to contribute much else today (day 1 of 30 with no coffee intake, thanks to yesterday's visit to the urologist), so here's an interview with Kevin Huizenga, my current favorite young cartoonist, interviewed by Tom Spurgeon, my long-suffering ex-editor at the Comics Journal.

Read some of Kevin's comics online. Tell me what you think! 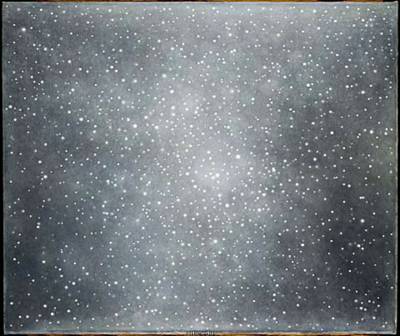 Jonathan Richman -- "When Harpo Played His Harp" in my head all day, knocking off Celmins' sky pictures and the Japanese maple leaves on Hornby Street.

Along the cliff edge, views are numbered, tour stops tied to the brochure
rack by the pay phone. The shoreline’s scattered logs and cobble
heaps. Sandstone cliff detailing everyone who ever waded through the thorns
along its base to chisel out their name. Tide high and ebbing, licking at the line
of wrack thrown up by larger waves. The tidepools Drew described all drowned.
Visible: just one brick-red star. The current stirs the glassy sea
like the air above a fire.

"The Bush administration is full of revolutionaries. They are shaking up the world by military force. They are playing a role familiar in modern history, pioneered by Napoleon Bonaparte, of using overwhelming military superiority to establish new forms of hegemony by appealing to desires for change among neighboring publics. Bonaparte promised the Italians liberty on the French model, but in fact reduced the Italians to a series of French puppet regimes and then he looted the country. So far Bush's Iraq looks increasingly like Bonaparte's Italy in these regards.

At a time of increased radicalization in the global South, at a time when mass terrorism has been made possible by new technologies, the last thing the US should be risking is destabilizing Asia by provoking a series of revolutions.

Kerry is not a revolutionary, unlike Bush. He recognizes that al-Qaeda is a real threat and needs to be the main focus of US security thinking. Kerry will capture or kill Bin Laden and al-Zawahiri because he will put the resources into that endeavor that Bush instead wasted in Iraq.

Kerry is worried about Iran's nuclear ambitions, but is highly unlikely to resort to military force or connive at a coup in Tehran. He will use diplomatic methods and more subtle military pressure.

Kerry will rebuild the alliance with Europe, which is crucial for fighting al-Qaeda. He will attempt to improve the US image in the Muslim world, which Bush has completely shattered. His approach to China will be measured. 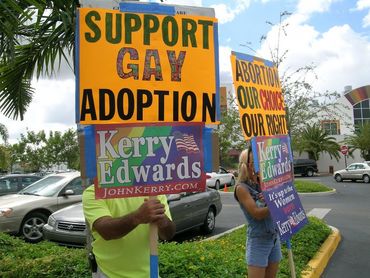 "As distasteful as it was, the stunt had the smell of desperation. ('Where evil meets stupid,' Stephen Elliott called it.) If Republicans are spending Sunday afternoon trying to fool voters with the some Gay Adoption signs then they must be in trouble. And the people in line weren’t buying. 'Nobody in this line is going to listen to them,' one woman said. A chorus of voters on either side chimed in: 'That’s right”; “We’re know what we’re doing'; 'We’re voting for Kerry no matter what that guy in the sign thinks he’s saying.'

Among the few people who didn’t realize what was happening at first, they were extremely annoyed when they figured it out. 'Is that Republicans over there? Yeah, it is!' said a man toward the back of the line. 'They’re gonna come down here and, try to try to fool us? That’s not happening.' Behind him, a woman added: 'Un-huh, that’s not right.'"
- posted by cjb @ 9:02 AM 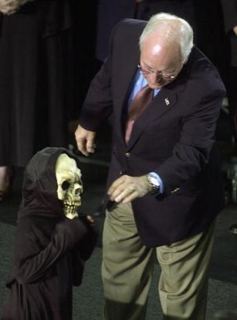 Better put the mask back on, George. Need a hand?

Q: Are you saying you want him dead or alive, sir? Can I interpret --

THE PRESIDENT: I just remember, all I'm doing is remembering when I was a kid I remember that they used to put out there in the old west, a wanted poster. It said: "Wanted, Dead or Alive." All I want and America wants him brought to justice. That's what we want.
- posted by cjb @ 9:26 PM