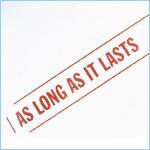 Lawrence Weiner, As Long as It Lasts (collection: public freehold)

Some more useful thoughts about producing and disseminating artworks digitally, courtesy the Guggenheim's Jon Ippolito:
"Digital watermarks are a bit harder to see (and easier to rub off), which makes it very easy for unscrupulous artists to download someone else's photo and pass it off as their own work. How is the artist of the original photo to prevent the public from destabilizing the market for her work?

"Again, the answer may be not to fight such destabilization but to encourage it. In the 1960s and 70s artists explored many relationships with their audience that were a lot more interesting than simply 'I make, you buy.' Since the 1970s Sol LeWitt has created a series of 'democratic drawings' made from folded paper and altered maps whose price is permanently fixed at $100 (take that, art market). While most of Lawrence Weiner's ephemeral language-based installations can be bought and sold via certificates of authenticity, he has entrusted his piece BROKEN OFF to public freehold--thus 'breaking off' any claims he or anyone else might have to future ownership of the work. Robert Morris was ticked off at a collector who had never paid for his art work Litanies (1963), so he created a new work (Statement of Aesthetic Withdrawal, 1963) that includes a notarized statement in which Morris claims to withdraw from Litanies all aesthetic quality and content. (No doubt this act brought a shudder to all those who place artistic intent paramount among the sources of aesthetic meaning.) In one of the most elaborate examples of a Conceptual artist provoking a new relationship with his audience, Douglas Huebler announced in 1969 that he was adding $1,100 to the reward for the capture of outlaw Edmund Kite McIntyre, who was already wanted by the FBI for bank robbery. Any collector who bought the piece acquired not only the wanted poster with Huebler's affidavit, but also the responsibility for paying the reward. (One can only assume that Mr. McIntyre would have been less than pleased to learn of Huebler's latest innovation in artist-public interaction.)"
- posted by cjb @ 10:17 PM