The New Yorker's editors weigh in:

"The damage visited upon America, and upon America’s standing in the world, by the Bush Administration’s reckless mishandling of the public trust will not easily be undone. And for many voters the desire to see the damage arrested is reason enough to vote for John Kerry. But the challenger has more to offer than the fact that he is not George W. Bush. In every crucial area of concern to Americans (the economy, health care, the environment, Social Security, the judiciary, national security, foreign policy, the war in Iraq, the fight against terrorism), Kerry offers a clear, corrective alternative to Bush’s curious blend of smugness, radicalism, and demagoguery. Pollsters like to ask voters which candidate they’d most like to have a beer with, and on that metric Bush always wins. We prefer to ask which candidate is better suited to the governance of our nation."
- posted by cjb @ 8:24 PM

Just now back from Seattle. Boxes of books everywhere.

William Gibson's a/ still alive, and, b/ blogging again, which makes me very happy indeed.

(Both links dead, originally available at http://static.vidvote.com/. Might be worth checking to see if they rematerialize. Link 1: Dubya offering the camera the finger as the countdown to airtime begins. Link 2: drunk Governor? Texas Rangers manager? Dubya swaying on his feet, offering all-too-candid assessements of acquaintences as the camera rolls)

Note (plea?) to my American readers: on November 2nd, please vote the Kerry/Edwards ticket, and send Dubya back home to Texas.

Newsflash: link #1 back up!

"'We're on the move. We're going forward. We're not going to go back to the days of tax and spend,' said the president. "We're headed in the right direction in America.'"

Bush Could Seek Up to $75 Billion in War Funding

"WASHINGTON (Reuters) - The Bush administration, faced with a growing insurgency and record fuel costs, plans early next year to seek $50 billion to $75 billion in emergency funding for military operations in Iraq and Afghanistan, administration and congressional officials said on Tuesday." 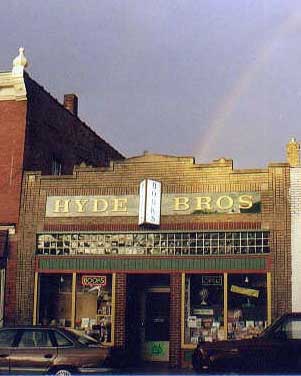 Hyde Brothers Books, Fort Wayne, Indiana, a huge sprawling open shop and one of the highlights of my cross-America drive last summer. Reminded now of Sam Hyde's kindness (Dealer discount! Storeroom in the next building over promptly unlocked! Ethel Wilson American PBO with a racy cover, and stacks of Charles Williams crime fiction!) and the incredible maze of traffic I had to navigate to find the shop in the first place, by this Jack Spicer letter, which I just found on line:

"Fort Wayne, Indiana, is the capital of Nitrogen. All streets end there. No buses arrive there except those that carry direct mail or cargoes of Negroes en route on the Underground Railway. There has never been a city made up of so many arms.

You can see Troy, New York in the distance.

Christmas poems and lovers' holly branches grow there in the winter as well as stuffings of turkeys, memory pie, and little droppings of passing angels. It is not reached by air.

Fort Wayne, Indiana, has industries and tournament golf, and blocks and blocks of weeping buildings. It is built on high ground above the slough of utter unwinding. The birds which all look like seagulls or cormorants in its artificial sky finish singing when the day is over. At night they look like elephants. People watch them with telescopes as they hover.

'What do the sparrows eat in the winter?' I asked someone once in Minneapolis. He replied, 'They eat horse turds if they can find them.'

There are acres of cold snow.

John Latta, again -- Pete to thank I think for this link to Hotel Point, though I found Samizdat magazine all by myself last night, desperately trying to to avoid editing the as-yet embargoed art review I've been postponing for days.

Both Samizdat poems make landscape-minded me happy, the lines below especially so.

"If
I love something enough to make it
Into something else, to pull its own

Peculiar shapliness into a kind of helplessly writ cloud-
Bundle of my own, it always comes out like this.
Because the sky is always more

Than grammar and the clouds
That stipple it do so
To appropriate, willingly or un-"
- posted by cjb @ 8:53 AM

was lots of fun. Gene and I collected a bag of samples on the walk up. Lots of fruiting bodies on lawns and public greenways.

The mega-shrooms I spotted in the Anderson River Group in July are King boletes. Edible and valuable!

Bitter Critic vs. 30 Seconds on Google

"There's a fine essay by R.C. Harvey, who's always worth reading. Then there's a babbling, pretentious and insight-free analysis of the formal aesthetics of Kirby's work by Christopher Brayshaw. TCJ seems to have a blind spot about the size of Jupiter for this kind of garbage, and Groth just can't help cluttering up his coffee-table masterpiece with a few pages of it here."

"Rob Salkowitz is a writer and consultant living in Seattle, Washington. His business, Rob Salkowitz Associates, Inc., provides strategic marketing and communications services for technology companies, and is currently engaged with Microsoft to develop a vision around the future of information work. Rob also writes reviews for Comic Buyers Guide." 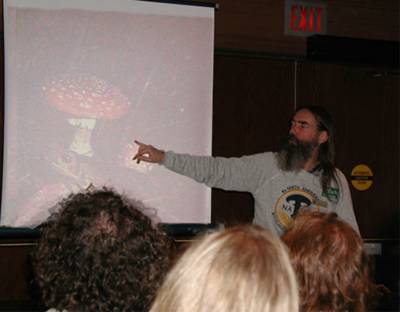