Those Cat & Girl links are back up (thx everyone who wrote)

Deep into Caro's Means of Ascent, v.2 of his remarkable Lyndon Johnson biography.

"As the helicopter charged across the vast plains of West Texas, in particular, anything moving on the flat, featureless brown landscape below could be seen for miles, and Lyndon Johnson sometimes seemed to be following the rule that if it was moving, he shook its hand. The pilot, asked once how often Johnson made him land for a handshake, replied: 'Whenever we saw more than two people and a big dog.'

Nothing in his path could escape. Was there an isolated farmhouse ahead? Into the midst of a peaceful farm setting -- wife in her kitchen, baking, perhaps; farmer milking under a tree -- the S-51 would suddenly swoop with the Pratt & Whitney roaring. 'The chickens thought it was a bird coming down to get them,' Busby recalls. 'They would go berserk, flying up and hitting the fences.' Cows would gallop awkwardly away in panic to the farthest end of the pasture, the milk bucket having been kicked over. Horses would squeal and rear in their stalls. And there in the front yard, broad smile on his face, campaign brochures in hand, would be a man saying: 'Howdy, Ahm Lyndon Johnson, your candidate for United States Senator. Just droppin' in to say good mornin'.'"
- posted by cjb @ 9:33 PM

Philipsburg, Montana -- apparently not that terrible after all

Richard Hugo -- his unimitatable statement-lines in my head all day in Bellingham, still knocking around in there today.

Degrees of Grey in Philipsburg

You might come here Sunday on a whim.
Say your life broke down. The last good kiss
you had was years ago. You walk these streets
laid out by the insane, past hotels
that didn't last, bars that did, the tortured try
of local drivers to accelerate their lives.
Only churches are kept up. The jail
turned 70 this year. The only prisoner
is always in, not knowing what he's done.

The principal supporting business now
is rage. Hatred of the various grays
the mountain sends, hatred of the mill,
The Silver Bill repeal, the best liked girls
who leave each year for Butte. One good
restaurant and bars can't wipe the boredom out.
The 1907 boom, eight going silver mines,
a dance floor built on springs--
all memory resolves itself in gaze,
in panoramic green you know the cattle eat
or two stacks high above the town,
two dead kilns, the huge mill in collapse
for fifty years that won't fall finally down.

Isn't this your life? That ancient kiss
still burning out your eyes? Isn't this defeat
so accurate, the church bell simply seems
a pure announcement: ring and no one comes?
Don't empty houses ring? Are magnesium
and scorn sufficient to support a town,
not just Philipsburg, but towns
of towering blondes, good jazz and booze
the world will never let you have
until the town you came from dies inside?

Say no to yourself. The old man, twenty
when the jail was built, still laughs
although his lips collapse. Someday soon,
he says, I'll go to sleep and not wake up.
You tell him no. You're talking to yourself.
The car that brought you here still runs.
The money you buy lunch with,
no matter where it's mined, is silver
and the girl who serves your food
is slender and her red hair lights the wall.
- posted by cjb @ 3:37 PM
Thursday, October 07, 2004

"Q: Is the camera broken?

A: Mount St. Helens is located in the Pacific Northwest where is has either just stopped raining, is currently raining, or is getting ready to rain. The elevation of the camera site is approximately 4,500 feet, is located approximately 5 miles from the volcano, and looks across the North Fork Toutle River Valley. This is an area which gets over 100 inches of rain a year. Most likely, you are looking at rain, clouds, fog, and/or a combination of the three." 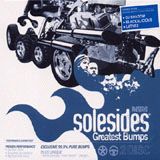 Lateef, Gift of Gab and DJ Shadow the highlights of this terrific 22-track 2-CD compilation which I found totally by accident waiting to secure the rental car.

Surrey backroads to the US border, through sun showers and rain. Orange pumpkins left to rot in trampled fields. The leaves changing along the Chuckanut Drive.

Downtown Bellingham deserted on a weekday.

Sour Mr. Henderson scowling as usual as he inspected my purchases, making sure an autograph or a $100 bill wasn't hidden in the hardcover first of Caro's Means of Ascent that I found in his stacks.

Weegee show, of all things, at the Whatcom County Museum, about sixty photographs in all, including many "experimental" collages and images made with distorted plastic and/or kallidoscopic lenses, which I had never previously seen or heard of, Rocket Ship Hitting Empire State Building my favorite of these.

Larrabee State Park empty in the late afternoon. I scrambled the scooped-out sandstone cliffs down by the shore, ID'ed mushrooms (16 varieties, in a 40- or 50- square foot radius under the salal bushes along the clifftops!) with one of my new guidebooks.

Grey sheets of rain moving across from Orcas Island. 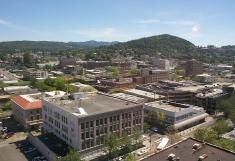 Another box of annual reports arrived from the Globe and Mail's free service. Half a dozen went to dinner with me at the terrible bargain sushi place on the corner. There's something appealing about investigating businesses more or less at random, trying to quickly grasp the economic characteristics and core competencies of each new business and group of managers. In this, I think I was far better served by my English lit and art history classes than my contemporaries were by UBC's commerce department. Annual reports are, after all, popular narratives, and can be evaluated, often usefully, on rhetorical or stylistic grounds. (This isn't to say that I don't pay close attention to financials, but it does mean that if I judge a company suspect based on how its managers represent their performance in the MD&A, 9 times out of 10, I won't bother with the financials. There are too many alternatives out there. To paraphrase Warren Buffett, a basketball coach doesn't waste time with five foot prospects; he looks for seven footers).

(note to MD&A): "Royal Host's financial statements for the years ended December 31, 1998 through 2002 overstated other hospitality revenue and net earnings, resulting from the misinterpretation of documentation pertaining to the complex calculation of a priority return Royal Host receives in relation to its 50% interest in a co-tenancy hotel operation. The miscalculation has been corrected by recording a prior period adjustment with retroactive restatement."

Subtitle #2: Strangely, the adjustment and restatement did not include management salaries or bonuses

Your Sky -- brilliant constellations above the fog

• The heavily medicated man who, unblinking, started counting out the 423 pennies he needed for his Richard North Patterson pocketbook, excavating lint-covered handfuls from the torn inner lining of his coat. Then the phone rang somewhere in the low 100s, breaking his concentration, and he started all over again.

• Gladhanding sharpie book scout with endless trunks of marginal material (Buffy the Vampire Slayer, True Detective magazine, & etc.) and Rolls-Royce taste. Actually asked how many paperbacks he'd need for the hardcover Kerouac 1st in the showcase. Variation: your mom, with stacks of Anita Shreve, Gail Anderson-Dargatz, & etc. That is, until the trade slip is written, at which point, instant morph into SBS. "That Kerouac in the showcase..."

• "What I really like about this place is that I never have to buy anything, I can just come in and read whenever I want." (verbatum; ejected)

• Foreign exchange student who stood for an hour opposite the desk, going through the wall of Taschen erotica page by page, his tongue making slow orbits of his lips.

• The new parents with the $400 stroller and the Jack Russell terrier, whose baby shrieked for 45 minutes while mom and dad built a little tower of kids' books on the floor, and the high-strung dog nipped a customer.

• "I'm looking for this book. There's this guy who's mining on the asteroids, only he's a robot, and, uh, I think it has a blue cover. I read it years ago. Man, what a great book!"

"So, where's your books with robots?"

"The science fiction section's down there."

"I know that. I mean, where's the books with robots?"

"...so he goes to the asteroids, see, in a little red spaceship. And what's realistic is that there's no oxygen on the spaceship, because, being a robot, he doesn't need oxygen, which humans need to breathe, but he doesn't know he's a robot, so of course he wonders, hey, where's all the oxygen..." 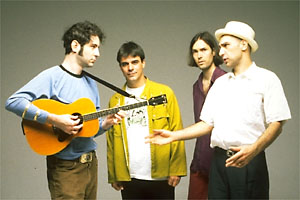 Sunday afternoon live: Mr. John Tweed on the deck, and the Rheostatics' Whale Music Soundtrack's harmonies percolating up and down the aisles. 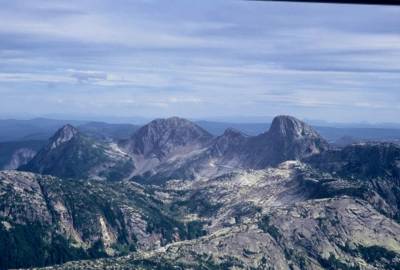 The Poem That Took The Place of a Mountain
Wallace Stevens

Fall leaf-litter, orange and yellow scraps at the feet of the sharks smoking out in front of the pool hall.

The Lions, Coliseum Mountain, and Mount Bishop all visible from Main and Broadway, their bare grey summits free of snow.

Once or twice a year the wind will rise, bringing the utterly clear scent of the alpine -- sun-baked heather; glacial melt -- down into the city.

(Opening the swinging garage door, the big metal bolts cold on my hands. The cidery smell of Saltspring Island apples laid in boxes by the car. Outside, cold stars, dark trees, and that same sharp smell. It's October -- 1979? 1980? -- 4am, and I'm about to leave our house in West Vancouver to climb the Black Tusk with my dad)

Writing this down so I remember.