"Domestic pigeons don't migrate, but if removed from a nesting area, they have a good homing ability and can return from long distances." (Russell Link, Living With Wildlife in the Pacific Northwest)
- posted by cjb @ 5:28 PM

YVR to CJB:  "Libby's First Sunrise" is actually on Trouble in Dreams, not Kaputt.  That's one of only about a billion different things wrong with your dream plan.

IN DEFENSE:  LFS was in the setlist for both the Vogue and the Commodore shows; looks like my subconscious did a pretty good job of assimilating it to Kaputt.
- posted by cjb @ 10:48 AM
Friday, March 29, 2013 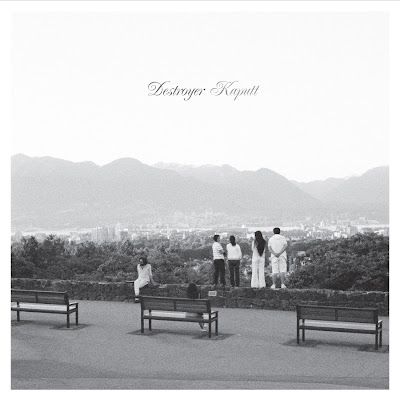 Anxiety dream: declaring my intention to perform every track on a local musician's shimmering symphonic pop masterpiece live at a UBC critical studies conference, even going so far as to insert the performance's title, date, and time into the event's sans-serif poster.  Subsequent interrogation by unhappy friends and artworld colleagues rightly inclined to consider this a "terrible, terrible" idea, including one particularly caustic assessment from a local painter-sculptor with whom I have only the most tenuous real-world contact.

Colliding, still dreaming, with the musician at the tiny backroom speakeasy down the road, the bar's Christmas lights blinking off and on, illuminating his checkered shirt and half-amused, half-annoyed dark eyes.  "You might learn something, I suppose.  Performance is hard."

Hard cut to the lecture hall, voices rising from within, the unfamiliar acoustic guitar banging hollowly against my knees.  Walking toward the stage, its single microphone.

Hobbes and Bacon, via L.

A Screaming Comes Across The Sky

Via Sterling.  Am I the only one unnerved at the prospect of two so-called "superpowers," or, more likely, some sketchy Central/South Asian organization with a homemade and/or Soviet surplus cardboard-and-duct-tape rocket + launch key, tossing these things back and forth (or, in the case of a SC/SAO, probably only forth) through low earth orbit?

"The HTV-2 is part of an advanced weapons program called Conventional Prompt Global Strike, which is working to develop systems to reach an enemy target anywhere in the world within one hour. It launches on a rocket, then comes streaking back to Earth at enormous speeds, at times heating up to temperatures of nearly 3,500 degrees Fahrenheit."
- posted by cjb @ 10:22 PM

"'Whatever the politics of this guy, his work is unoriginal crapola one-liner kitsch,' Saltz said. 'The only label I would write about this guy’s work would be: "Any museum that thinks this work is anything other than kitsch needs to rethink itself."'"
- posted by cjb @ 1:54 PM
Monday, March 25, 2013