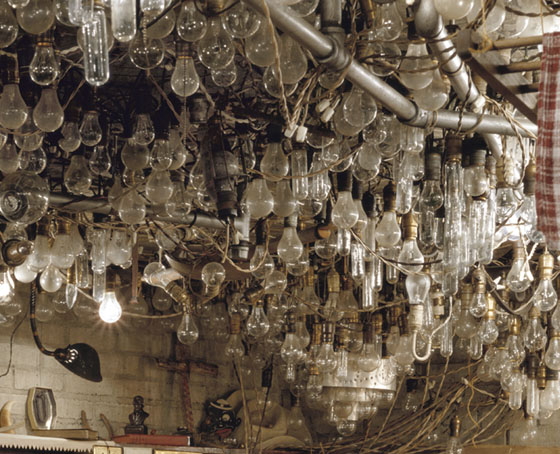 "I had to create a ceiling that was covered by lamps, but not just covered, had to have shapes and flows in it, so that there’s a whole galaxy going on the ceiling. Some are lit, some aren’t. They all worked, but over the time of working I realised it wasn’t as interesting working with all of the lights on. Plus it was unbearably hot. I doubt the man underneath would have been able to keep them on for more than 10 minutes in his place, he would have roasted! But he did use those lights for making toast, and making melted cheese sandwiches. He could fry an egg up there! There’s a little divide hanging from the ceiling, and you c[an] see bits of cheese hanging down from it, where he toasted his cheese under the bunch of very hot lights."
- posted by cjb @ 2:48 PM