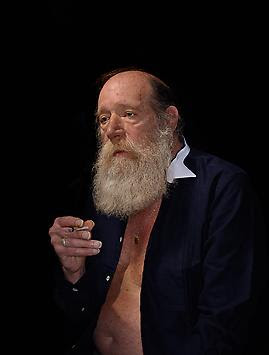 Back from five days in LA, where I made two new pictures and studies for a few others, hiked in the desert, drove the extremely swoopy and nerve-racking Angeles Crest Highway, enjoyed "hot salty soymilk" (a Taiwanese breakfast staple) at a Montery Park hole-in-the-wall, and saw excellent exhibitions by Saul Leiter and Catherine Opie.  I've written about Leiter before; his best works, shot in the late 50s and early 60s, look like proto-cellphone photographs, with their bright blurs and smears of  "abstract" color.  I bought a Steidl book of his color photographs in Vegas four or five years ago not really knowing who he was, only that maybe half the pictures in the book -- mostly the messy, abstract ones -- felt fresh to me, contemporary in the best sense of the word.  The pictures on display in Santa Monica were a little larger than I'd thought they'd be, but the beautiful crisp deep color of the Steidl reproductions carried over more or less unchanged (as opposed to, say, my experience of recent William Eggleston prints, also coincidentally in Santa Monica, whose chalky, dry, overbright pigment-print colors contrast, unfavorably, with the jewel-like clarity and color depth in his earlier dye-transfer prints).

Good Catherine Opie show at Regen Projects, including some middling huge "abstract" landscapes and some terrific portraits of Lawrence Weiner (above) and one of Opie's son and his pet mouse.  The best picture in the show is the Weiner portrait -- the light on the forehead; the hand and its long nails; the expression, which nails intensity and exhaustion in equal measure.  The slightly tilted head and the complexly folded hand (try to repeat the pose yourself; it's hard) makes me think of El Greco, not one of the sources cited in the press release, but a comparison that feels right.

Opie, along with Sturtevant, Robert Adams, and Jeff Wall, is one of the few living artists who surprises me each time out, largely because there is no settled consensus on what a "Opie" looks like, either in style or subject matter.  Everyone thinks I must like the early LA landscapes -- the highway overpasses and mini-malls -- and it's true, I do, but I think figurative works like her Self Portrait / Nursing (2004) are immeasurably stronger because they rub at the edges of genre, managing to belong to many different categories of picture-making simultaneously.  Opie, like my friend Brad Phillips, has found a way to include autobiographical, or almost confessional, content in her work without coming across as sentimental, or a dumb-ass.  It's a hard thing to do.  As Ali G. says, Respect.

Everyone (well, two or three people) wants to know about the Hockney picture. It's a remake.  I think that by now that remakes, or repetitions, or cover versions, or whatever you want to call them, are a pretty firmly established part of my practice, one that's not going away.  There is a perception that I only remake Jeff Wall photographs, but this is not actually the case.  So far it's Wall, Hockney, and John Carpenter, with some other more or less lucky folks waiting in the wings.

The intent, so far as I can tell, is for me to make a unique work, in the same place, using a more or less identical compositional method to the original as I understand it.  ie., slippage. If I knew why I was compelled to to this, and to exhibit these "mildly pathological" works, which only seem to confuse and puzzle people, alongside my other, autonomous pictures, I probably wouldn't be making them.  But enough.

The parallels between Hockney's Pearblossom Highway and my Street View adventures are self-explanatory.  I first found online, then drove out to, the original's location in the Antelope Valley, about an hour north of LA, to see if remaking it was feasible.  It still might be.  But all the good signs are gone, and Caltrans has dumped bark mulch, plain drab brown bark mulch, all up and down the road's edges as landscape "improvements" and paved over "STOP AHEAD," the best part of the original.  The actual location was like a big blinking neon sign reading, Fuck off, CJB!  But, whatever.  Four days ahead.  Make a picture, on site, using the same methods, that has something of the "spirit of the original."  Like those mystery baskets on Top Chef.  Go!

One day to think, 400+ landscape studies, wandering around  in bright sunshine, remembering how to work the manual camera controls and getting familiar with the slant of light in the sky.  Motel room review.  One element stood out, an extremely weathered sign not present in the Hockney picture, but located within the original's field of view.  Reflective, green and white, diamond letters, a font that felt a lot like one of Ed Ruscha's.  The breaks and cracks and imperfections in the sign's face made me think of folded-up southern California from the air.

Tape measure and a stepladder at Home Depot.

Three days on location, 4 to 4.5 hours a day, obsessively photographing every inch of the sign under multiple lighting conditions.

Everyone has questions.  Contrary to Jeff Wall's assertion that photography is boring, and attracts no onlookers, my experience is that everyone wants to talk to a man on a ladder in the desert next to a stoplight.  Truckers; Caltrans guys watering the freshly planted shrubbery; hopeless hitchhiker (because only the insane, or a very young German backpacker, would ever attempt to hitchhike from Las Vegas to San Francisco via the Antelope Valley); California Highway Patrol.  Hey, whatcha doing...?

Playback and reassembly back in YVR, beginning tomorrow night, to produce an "approximate replica" of the sign, life size, out of c. 600 small color prints.  Which, needless to say, will be deliberately full of perspectival imperfections and small flaws.

The other new photograph, Picture for Rose (Littlerock, CA), was made with the help of my little stuffed mascot/travelling companion Rose T. Cat, who most of you already know. It's a straight black and white Hey-nice-tones! art photograph of a knight on horseback, and dinosaurs, and giant tigers, and the Eiffel Tower.  It looks like a Lee Friedlander, and I am totally not kidding about the content or its co-author.  My guess is that it will be much more popular than anything I've ever made before, and that some folks will say, Yeah, this is it, now you should make a series.  Well, no.  But it was the first thing I test-printed when I got home, just so I could show it to Rose, and it made that little oversize personality very happy.
- posted by cjb @ 8:15 PM

CONDITIONS FOR THE REPLACEMENT OF LOST CERTIFICATES

1. A complete provenance of the work in question must be supplied. This provenance must include a signed statement confirming the transfer of title and certificate from each of the successive owners.

2. Carl Andre or a representative of the Carl Andre and Melissa L. Kretschmer Foundation must inspect the work.

3. A fee of two one-ounce Canadian gold Maple Leaf coins for issuing the first statement of authenticity, three such coins for the second, four coins for the third and so on, plus expenses, is payable to Carl Andre or the Carl Andre and Melissa L. Kretschmer Foundation. Such coins can easily be found and obtained online.
- posted by cjb @ 6:08 PM 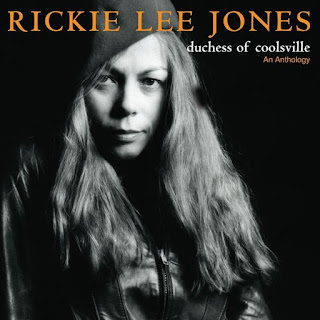 Q: I’ve read in the past that you don’t like the word “covers.”

RLJ: “Covers,” I guess, is a word used only with writers to indicate a lesser work. Your real work is what you write. We don’t describe Sinatra or Ella [Fitzgerald] or Tony Bennett as doing covers. We know [they] don’t write, and in fact we don’t even think about it. It’s not discussed. But that’s jazz. The singer-songwriter genre was always sticky, and that was why from the beginning of my career I did “covers” and did them on the same record as my own compositions, to try to make the point that a song is a song. At the heart of it, I‘m such an AM radio American girl. It’s all my music. And The Rolling Stones did covers. It was before the sacrosanct Dylan aftershock, and I think I thought I could expand the genres, keep the walls from closing, and make a place for songwriters to sing and singers to be respected the same as the singer /songwriter.

"She wasn’t copying the works—at root, a photographic process—but instead repeating them, mastering the actual techniques involved in their creation in order to make works that would look and feel as close as possible to the real thing. 'She adopted style as her medium,' is how MoMA PS1 curator Peter Eleey explained it to us when we called him. 'At least early on, most of her work looks like other people’s work, which makes it very challenging to describe and discuss.'"
- posted by cjb @ 4:04 PM

Huge Tree Pastry, Monterey Park -- closed 'til March 1st, but the rental car and I will be on the doorstep first thing on Friday morning, guaranteed.
- posted by cjb @ 1:04 PM 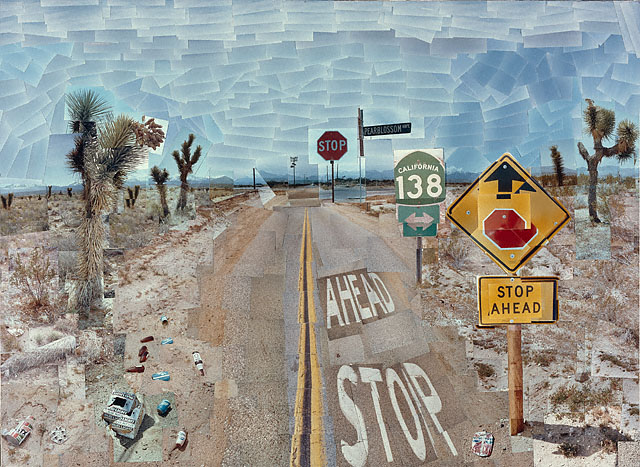 Five days in my favorite city to walk, drive, hike, eat, and to make pictures of a mixed-use building in a working-class neighborhood, a little tree in a public park, a South Pasadena hedge, a desert crossroads, and some smallish black-and-white pictures of not very much at all.
- posted by cjb @ 11:17 AM 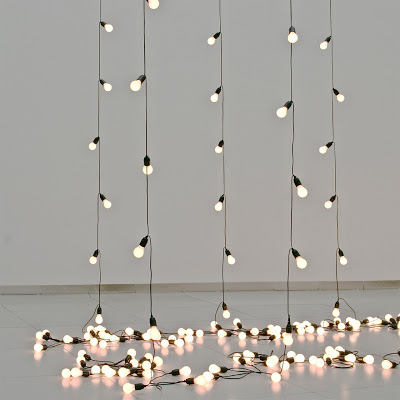 "When Sturtevant presented her repetitions – including Warhol’s flowers – in her first solo show at the Bianchini Gallery in New York in 1965, she was met with incomprehension, reproach and indignation. Her works were understood superficially as copies. However, in repeating works, Sturtevant wanted to open up the space behind them, to initiate a critical discussion about the surface, the product, the copyright and the autonomy and the silent power of art. Warhol himself, who blithely left behind the debates about the original and reproduction and rendered the principle of uniqueness obsolete, made an original screen available to her for her flower series. With her works she also anticipated Gilles Deleuze’s ideas about difference and repetition in his 1968 book of the same name. In addition to numerous Warhol flowers, Sturtevant also produced other works after Warhol and after Frank Stella, Roy Lichtenstein, Marcel Duchamp, Joseph Beuys and James Rosenquist, whose surnames she refers to in the titles of her works – along with the title of the original – hence alluding to the iconic nature of a name, behind which a work can even disappear. In 1974, the criticism of her approach became so intensive Sturtevant decided not to create any more art until, she said, the retards caught-up. This happened in the 1980s with the emergence of the generation of appropriation artists, including, for example, Sherrie Levine, Louise Lawler and Richard Prince. In the mid-1990s, Sturtevant shifted her focus to younger contemporaries like Keith Haring, Félix González-Torres and Robert Gober, but with the same instinct for works that would instantly become icons of art history."

Sturtevant's method isn't mine -- not exactly -- but without her brave, rigorous example I don't think I ever would have picked up a camera.
- posted by cjb @ 10:14 AM