Approximately 2000 new books since 10am. A madhouse day, more like the week before Christmas than mid-April. Door open, light breeze curling round. Live Talking Heads on the deck, all jittery fast guitars and start-stop rhythms. Sunlight, green leaves curling in the wind. Purple posters for John Armstrong's launch -- Friday 24 April, 7-9pm, a joint Pulpfiction/New Star Books presentation -- in the window.

"So, what kind of books do you buy?" (Aggressive spurned hawker of Reader's Digest, John Grisham, & etc.)

Hart Stores' CFO either resigned or was let go toward the end of March. Massive insider selling in the last few weeks. Nothing fishy in the most recent set of financials, but it seems prudent to substantially trim back Anodyne's position. Quarterly report scheduled for release this coming Friday.

No pure resource plays; I don't have any skill at evaluating the operation of a diamond mine, gold mine, copper mine or a natural gas field. No airlines, no biotech, and definitely no high tech. These things are totally outside my extremely small "circle of competence." And, as usual, the Anodyne portfolio is a "didactic enterprise," and not a recommendation to buy or sell any security.
- posted by cjb @ 9:43 AM 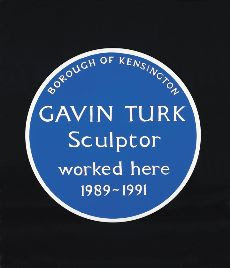 Sunshine after rain, damp steaming from the pavement in the hot spring light.

I'll be ready when my feet touch ground
Wherever I come down
And if the folks will have me
Then they'll have me....
- posted by cjb @ 9:07 AM 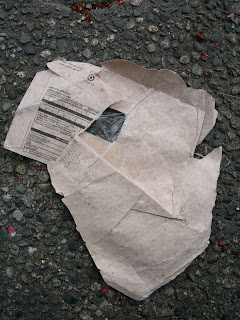 A string of distributions today, including yet another missed one caught with the new and vastly improved stats checker: 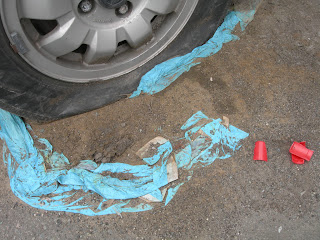 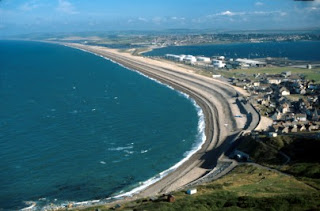 "[A] certain way he had of looking away from her and going silent. It was the brooding expectation of her giving more, and because she didn't, she was a disappointment for slowing everything down. Whatever new frontier she crossed, there was always another waiting for her. Every concession she made increased the demand, and then the disappointment. Even in their happiest moments, there was always the accusing shadow, the barely hidden gloom of his unfulfilment, looming like an alp, a form of perpetual sorrow which had been accepted by them both as her responsibility. She wanted to be in love and be herself. But to be herself, she had to say no all the time. And then she was no longer herself. She had been cast on the side of sickliness, as an opponent of normal life."

And there I stopped reading, and gazed a while out the window, at the bright backlit cartoon animals across the street from the coffee shop (Telus Corporation's geckos, flamingos, and little pink piglets). Rain was falling, lightly, through the green trees, onto the sidewalks and hurrying commuters, some of them awkwardly bent as they wrestled umbrellas out of their briefcases and purses to block the shower.

A very clear memory of sitting up in bed by myself some distance from Vancouver. Noisy vomiting clearly audible over the running water in the bathroom.

Mismatch city. Lots of sympathy for both parties. Decades later, the big box of coming-out books that offered retrospective clarity.

Desire's a funny thing, the source of more black comedy in my life than I might readily admit.

Finished Chesil Beach pissed off and furious at its aging single male protagonist, at his anger and wounded pride and confusion.

"He would never attend the concerts, or buy, or even look at, the boxed sets of Beethoven or Schubert. He did not want to see her photograph and discover what the years had wrought, or hear about the details of her life. He preferred to preserve her as she was in his memories, with the dandelion in her buttonhole and the piece of velvet in her hair, the canvas bag across her shoulder, and the beautiful strong-boned face with its wide and artless smile."

I identify with this point of view, with its hopeless weak lyricism, and its need to suspend the past as if under a transparent glass bell. McEwan doesn't, but he's a lot more hard-headed than I am in matters of the heart. More of a realist. And I recognize that realism's strength every day -- have reconciled myself to it, you might say -- though perhaps more intellectually than emotionally. "L'amour est un oiseau rebel; il ne jamais jamais connu le loi." As for those decades-old memories, which Chesil Beach brought back tonight with violent, unwelcome, and completely unexpected force, Wittgenstein's cryptic admonition will have to do: "What we cannot speak of we must pass over in silence."
- posted by cjb @ 7:05 PM
Wednesday, April 11, 2007

"Only thought which does violence to itself is hard enough to shatter myths." (Max Horkheimer & Theodor W. Adorno, Dialectic of Enlightenment)
- posted by cjb @ 11:06 AM

You Should Know the Program

Lots to listen to (and maybe even right-click) here, including the studio remake of Gaucho's apocryphal Second Arrangement (below), all the extant studio demos, and a fine curated selection of live recordings.

Here comes that noise again
Another scrambled message from my last best friend
Something I can dance to
A song with tears in it....
- posted by cjb @ 9:37 AM
Tuesday, April 10, 2007 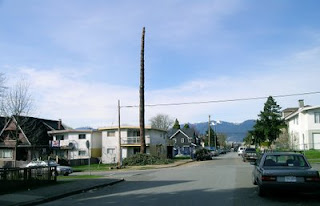 Salsbury and William, courtesy Sharla Sava, via Pete. I walked over this evening for a casual reconnoiter, but as it turns out, Ms. Sava has it nailed. As Goya says, "I've seen that."
- posted by cjb @ 11:01 PM 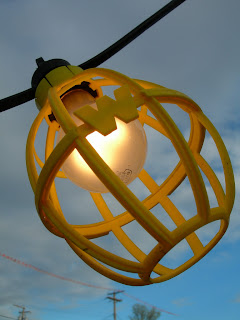 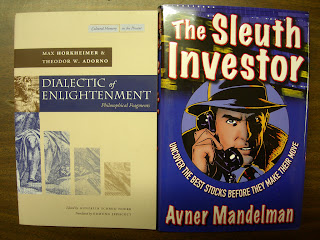 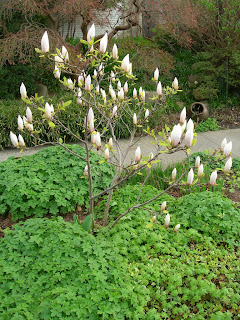 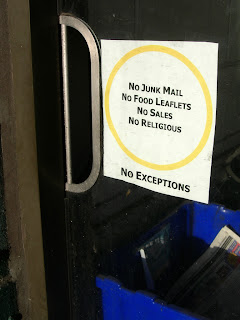 "23. One artist may misperceive (understand it differently from the artist) a work of art but still be set off in his own chain of thought by that misconstruing.

25. The artist may not necessarily understand his own art. His perception is neither better nor worse than that of others. 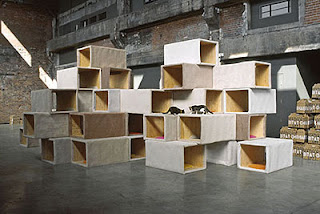 Kitty Scott gets the conceptual, ethical, and economic implications of Brian Jungen's magnificent Habitat 04 in a flash:

"One of the primary reasons the SPCA concerns itself with the welfare of cats today is that the supply far outweighs the demand. In this situation the institution functions as a feline halfway house between life and death. One of the SPCA's goals is to find prospective homes for cats. Sadly, the remaining cats that do not find homes are put down. As I understand your proposed scenario, the cats brought to Quartier Ephémère will remain there until adopted and new cats will replace those that leave. Effectively, this means you are extending the lives of a number of cats and for those that find homes, you are giving the gift of life.

Your proposition is worthy enough. Still, I cannot escape the art context and the value of your increasing fame within this system. For every cat passing through the Safdie inspired compound becomes a ready-made imbued with all the worth your name signifies in the current art world. In other words, the value-added cat becomes a Jungen artwork, or perhaps 'multiple' is a better word. Such signification will hopefully increase the chances a cat will be 'collected' and thus survive." 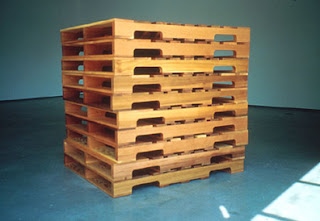 Brian Jungen, Untitled, 2001. 10 handcrafted red cedar pallets. My favorite work by this ambitious uneven artist, and crucial to my thinking about appropriation, remaking, remixing, & etc. (My other favorite Jungen work, Habitat 04, is an "inhabited sculpture" that balances great formal rigor with rare and clear-eyed compassion).

Lots of email about Theft, below, including genuine incomprehension about how and why the piece was made. Short answer: in much the same spirit as Untitled. A source photograph not by me, which I then color-corrected, digitally touched up, printed, framed, and hung. A sincere attempt to show the source image off to its best advantage. Title's a nod to Peter Carey's great comic novel about the venal contemporary artworld.
- posted by cjb @ 2:31 PM

"Like the satellite in miniature in the film Valis, the microform of it run over by the taxi as if it were an empty beer can in the gutter, the symbols of the divine show up in our world initially at the trash stratum. Or so I told myself." (Philip K. Dick, Valis)
- posted by cjb @ 11:34 AM 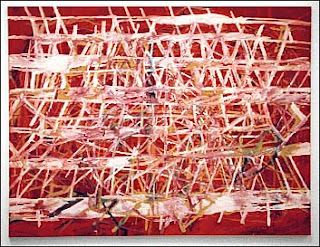 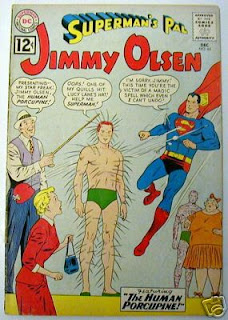 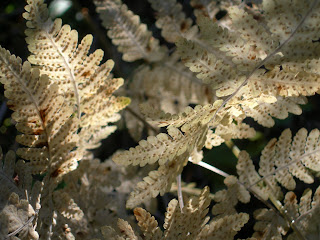 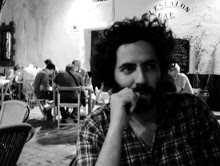 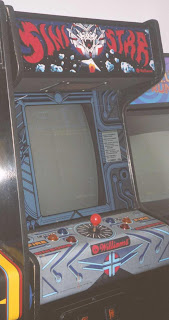 Sinistar emulator here, by popular demand. Lots of other tough favorites on the same site, including the incredibly-hard-t0-beat Defender. Don't blame me!
- posted by cjb @ 10:13 PM 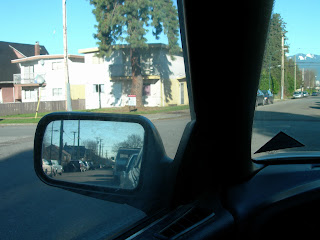 Via Pete, news I would just as soon not have received: the big pine on the corner of Salsbury and William, just off Commercial Drive, is gone, chainsawed out of existence by the new property owner (nb. "One Percent Realty" sign in the foreground, February 2006, the equivalent of those troublesome blotches that keep cropping up on your chest x-ray). The second Jeff Wall photograph I ever tried to find, equipped with my old beater, a Vancouver map book, and a few important clues (minimal shadows; the Cut on Grouse Mountain to the north; and the houses visible at Salsbury's far north end).

On the day I found the pine, I was too early, and the light wasn't right. So I patiently sat in the car, listened to the radio (U2, the Cars, Trooper, Pink Floyd) and watched the shadows change. A mostly quiet street. Kids walking to school; Chinese grandmas with wire buggies; a guy towing his baby behind his mountain bike in one of those weird yurt-on-wheels kid-carriers. A calm and tranquil morning. Time to study that big ragged tree dozens of times, never dreaming of how soon it'd be gone.
- posted by cjb @ 7:57 PM 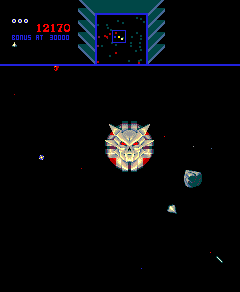 All the corners of the buildings
Who but we remember these?
The sidewalks and trees
I'm thinking now
I got a better way
I discovered a star.... 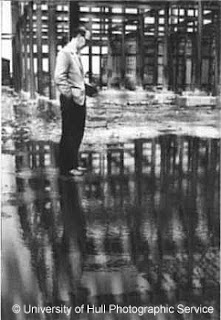 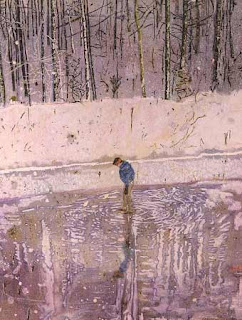 April mist: dark greens, olive-greys, pink sprays of blossom. Rain falling, gently, on the sidewalk, on the things clumped by the bus stop: a fat clump of yellow phlegm; a shredded cigarette's loose sprinkling of tobacco; a sixpack's plastic rings. Air charged with the scent of sea-salt, with earth and pollen. A torn page from the back of the Georgia Straight abandoned in the gutter. Bold black capitals -- PROSTATE MASSAGE -- scarcely visible through the oily water.

"Interest in the sachlich, the neutral, the thinglike, implies an aceptance of the failure of rhythm in the world, and the impropriety of one of representation's grand projects, the negating of this failure in an 'aesthetic dimension,' to use Herbert Marcuse's phrase. When a thing is broken and thrown on the refuse heap, it falls off the highroads of history. The bold, fresh lines of movement no longer refer to it, its contours slump, its volumes are crumpled, its surface withers, its defeat as part of the livingness of life and being is manifest, and it becomes an object of aversion, cadaverous and abject. It is at this moment that it truly comes into being as an object. The sachlich marks the category of things in their alienated state; that which is sachlich is that which has been expelled from a certain universe of form and rhythm and which has, possibly imperceptibly, begun its migration to another one." (Jeff Wall, "Roy Arden: An Artist and His Models")
- posted by cjb @ 9:03 AM