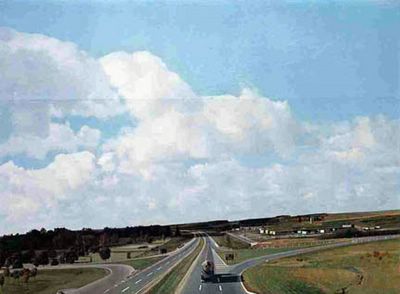 Another great London painter, not that you'd know it from this afternoon's half-assed description masquerading as analysis. 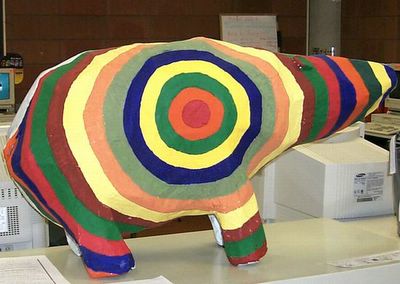 "The painting I chose to copy onto my paper maché polar bear is called Gong 88 and was painted by Claude Tousignant. The painting is made up of several rings, one outside the other. These rings seem to resonate. The colours of the rings are both warm and cool. The painting reminds me of a large target. I chose to hide my polar bear in this insensitivity toward the environment and thus, the safety and survival of an entire species. The issue of humans pouring toxins into the environment, which affects all living things, resonates like Tousignant's rings of colours."

"The work plays with several ideas. One is a reference to painting by numbers. 'The numbers relate to actual events in Curnoe’s life,' says Leclerc. The coloured figures correspond to every kind of phenomena that Curnoe viewed from his studio window: weather conditions, light effects, birds, traffic. Not all numbers represent actual events. Look in the upper right area of the canvas: you’ll see an American B-58 Hustler bomber being shot down by a Canadian. Curnoe, like many of his Canuck cohorts, was virulently anti-American. Ironically, when Curnoe was killed in a cycling accident, his body was taken to this hospital."

Misdescribed this afternoon to a visiting Gwynedd Elaine and posted here for completeness' sake.

Short for "Chris, Steven & Adam," or "Contemporary Sophisticated Art," or any combination of your own. #5 - 2414 Main Street, directly above Pulpfiction. Owned and operated by Adam Harrison, Christopher Brayshaw, and Steven Tong. Inagural exhibition of photographs by Mike Grill, in early September.

Presently I have a floor full of asbestos-laden tiles to remove, so I may be scarce for the next few days, or posting at unlikely intervals.
- posted by cjb @ 8:55 AM
Tuesday, August 02, 2005

Adam Harrison writes: "Came across the name Anton Zwemmer, a London bookseller who opened a space above his book store in the 1920s to mount shows by the likes of Dali, Picasso and Miro."
- posted by cjb @ 9:38 AM

Eight or nineteenth day straight on the job, up at dawn, the north light all changed in the last few days, that dusty creeping quality that says, "Fall." Just a whisper, really, like the lone cricket peeping outside the apartment door at 2:45am. Or the trees along Quebec Street by Science World already gone to gold, leaves scattered curbside "like shook foil."

Down the hill Sunday night. Glimpse of a long-lost face. Emotion deflected into landscape as per usual. Paying closer than usual attention to the sky, high mackerel-colored cloud rolling through. Slant light on the green mountains, illuminating ridgelines typically compressed by distance and haze.

The office smells of Pet Deodorizer and Recently Deceased Mouse. The shop smells like Aurora's pilot light. I smell like Old Spice stick deodorant, sneaker futz and sweat. Beard stubble higher on my cheeks than ever before, on the back of my neck and shoulders, biceps, knuckles and ears. 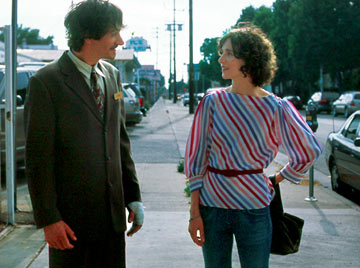 John Hawkes and Miranda July in character, from July's amazing directorial debut, Me and You and Everyone We Know. Hawkes' Richard the shoe salesman held my attention all the way through, with his nervous squinty eyes and almost supernatural attention to natural phenomena -- to stray birds in the branches outside his window; to the full moon, which, in a wonderful cut, transforms into light reflecting off July's compact, which she aims round the darkened shoe department, hunting him.

The only downside to this otherwise well-written, wonderfully acted, and stylishly directed film is the cheap shots July lobs at the world of contemporary art. I don't blame the film's creepy curator and even creepier assistant for initially blowing off July's overemoting "video performance artist" character; given identical circumstances, I'd do the same without a second thought, having encountered many folks who think they can land gallery shows through sheer force of will. July seems to acknowledge this quandry when she shows her character watching her own "autobiographical video art" in a museum -- "art" which seems much more formally limited, technically impoverished, and uninteresting than the film framing it.