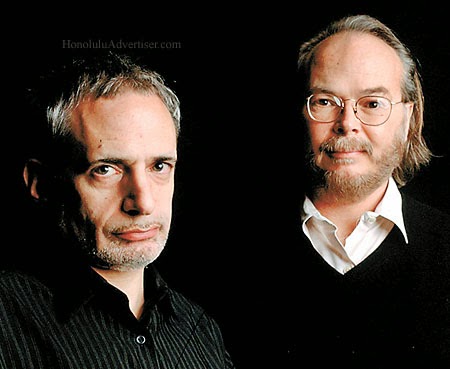 Steely Dan had officially broken up when I first heard them, c. 1985 or so.  I naturally assumed I'd never be able them play live, let alone enjoy any new studio albums.  Fifteen shows later & counting...

Favorite tour moment: summer 2013, Boise Idaho, general admission, fifteen feet from the band.  Like seeing thirteen of my favorite musicians playing in the front room at PFB.  The music packed with humor, brilliant improvisation, micro-textures.  And like the Duke Ellington Orchestra, SD's touring incarnation has only improved with age, the antithesis of those dinosaur-rock acts who chug out the same faithful-to-the-studio-version of their Gold Hits album over & over again.

DF and WB are, by all accounts, much like me, shy introverts, & I don't think I'd approach if I ever ran into either one of them in public. (Though I did hit up Penguin Books for a DF phone interview when Eminent Hipsters came out, the only time I have ever leaned on a publisher for a favor.  Penguin PR first ignored me, then put me on a list, and then, at the last minute, a Fagen family emergency cancelled 99% of the phone interviews, mine included).

The fine example of Donald Fagen and Walter Becker's deep integrity, perfectionism, and openness to Black American art -- blues; soul; jazz -- has had a deep and lasting effect on me.  I hope they keep recording and touring for years to come.
- posted by cjb @ 8:39 PM 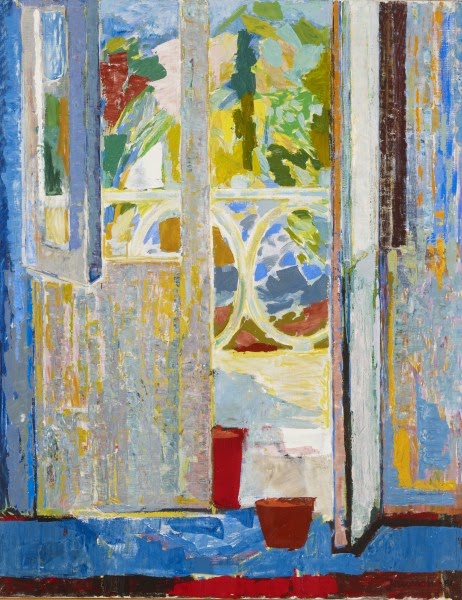 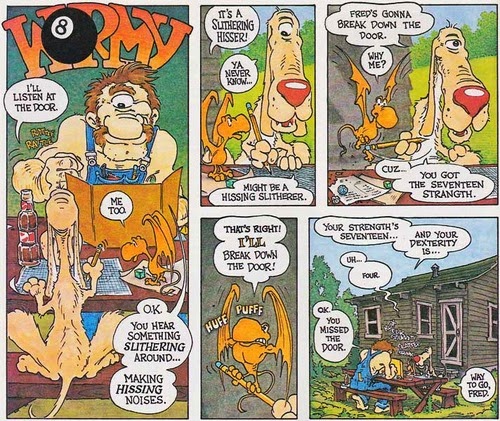 "[T]he digital revolution and landscape of ubiquitous image-making has created a situation where curators and critics specializing in photography have to define the field exceedingly narrowly in order to have an ‘object’ of discourse at all. In order to have anything to curate, critique, or discuss, a very small slice of the photographic landscape has to be carved out and isolated for discussion, such as 'fine-art' photography, 'documentary' photography, 'historical' photography, even 'analog' photography. As a consequence of narrowing the objects of inquiry so dramatically, the critical discussion around photography ends up inevitably admitting only a very small range of photographic practices into its purview. Consequently, critical discussions take shape around a small range of photographic images and practices which are extreme exceptions to the rule. Photography theory and criticism has less and less to do with the way photography is actually practiced by most people (and as well will see, most machines) most of the time. The corollary to this narrowing of the field is that traditional conversations and problems of photo theory have become largely exhausted. Simply put, there is probably not much more to say about such problems as 'indexicality,' 'truth claims,' 'the rhetoric of the image,' and other touchstones of classical photography theory. And what remains to be said about these photographic 'problems' seems increasingly extraneous to the larger photographic landscape that we inhabit."
- posted by cjb @ 7:38 PM

"Ever seen a Rube Goldberg cartoon, where everything including the cuckoo clock and the rocking chair are tied together with long steel wires? Well, the Internet of Things is just like that, except the wires are invisible and owned by somebody incorporated in Liberia."
- posted by cjb @ 7:35 PM 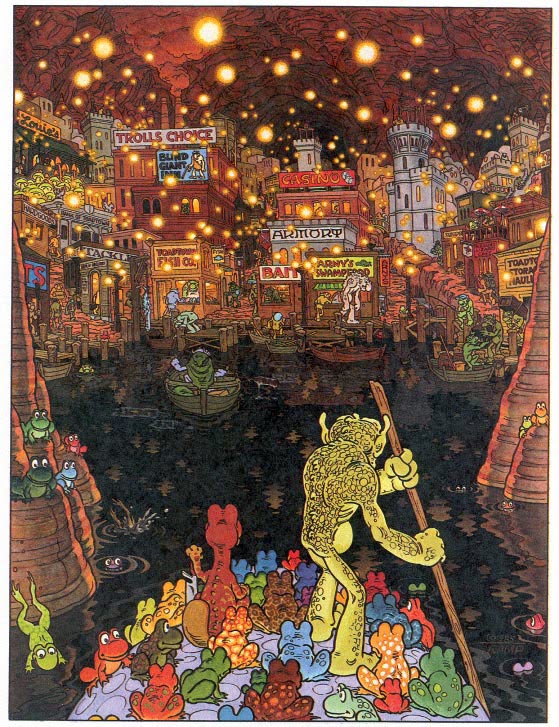 "He rolls his own - no filters. He keeps his smokes in a novelty box that displays the word 'Outlaw,' embossed in thick, red ink.

When the key is in the ignition, he's not just David Trampier. He's cabby No. 4, and he knows Carbondale better than people who have lived here their entire lives."

D.A.T. was the Walt Kelly of AD&D, regardless of how he might have felt about his contributions later.  Humor; wild invention; beautiful solid drawing.  RIP Tramp.
- posted by cjb @ 2:56 PM 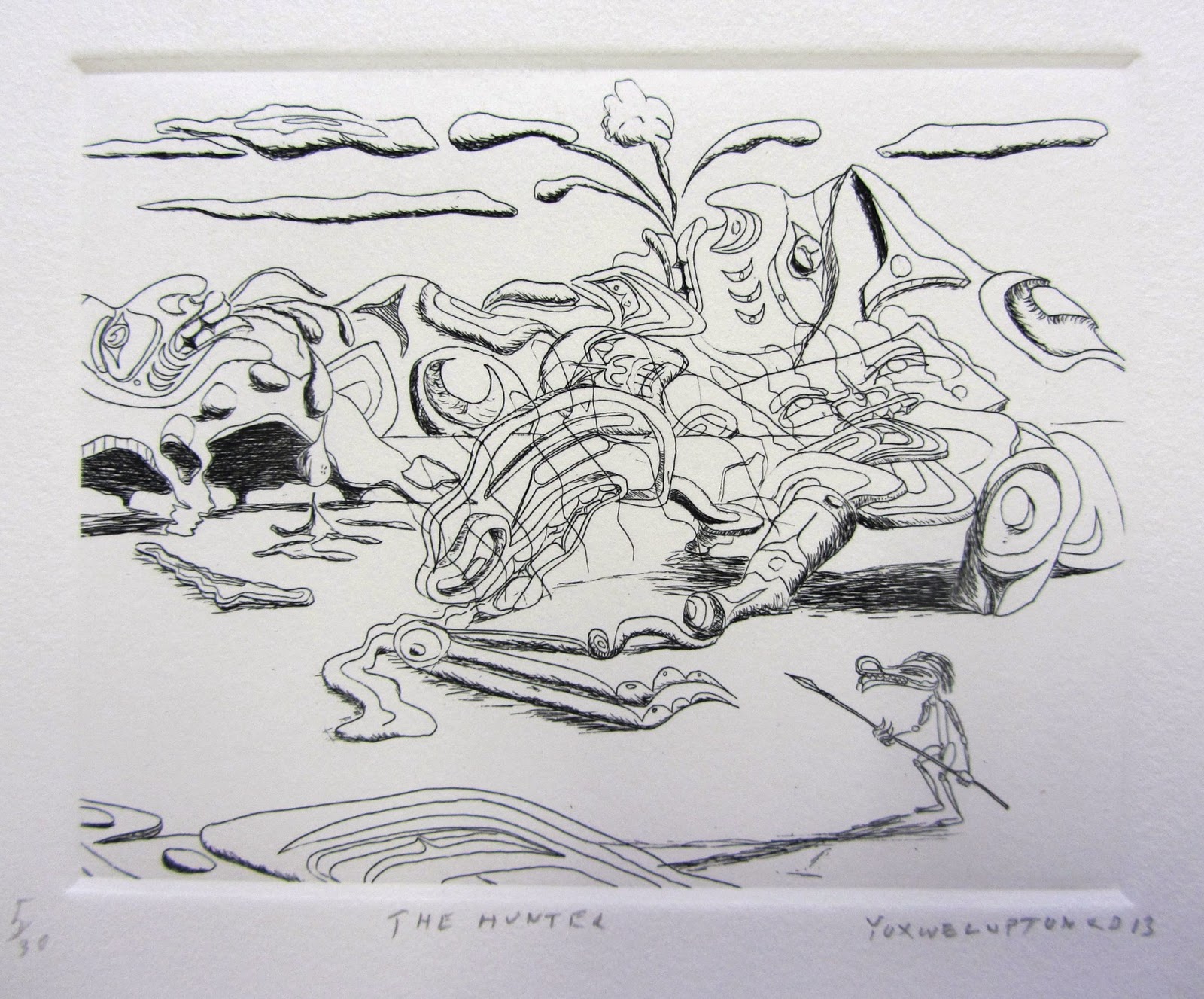 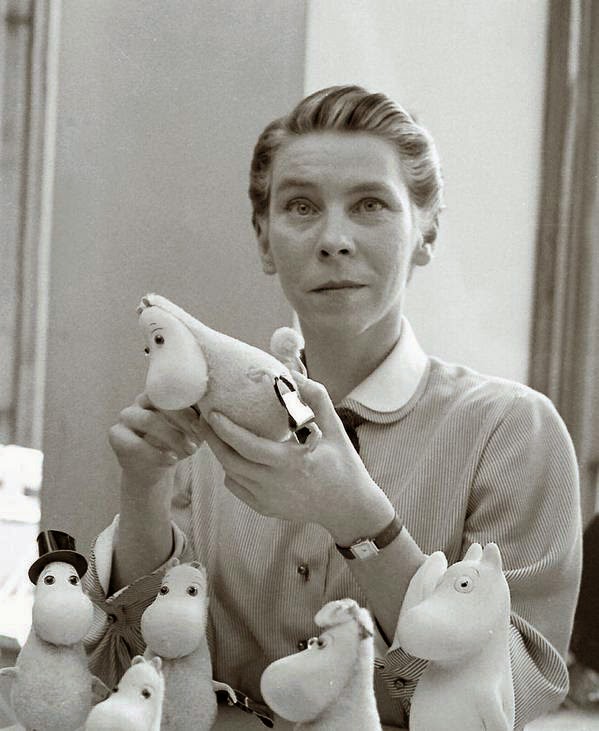 Allen, again.  Story of my life:

"Socrates had no wish to be hated.  His service to the god caused him to be hated, and he perceived the fact with grief and pain.  But he still maintained the soldier's station in which the god had placed him.  Brought into court and compelled to abandon his customary form of inquiry by question and answer, he aimed at truth, so far as he could tell it, about his own character and the nature of his mission to Athens.  Because he was, after all, an ignorant man, and yet concerned to persuade his hearers of the truth so far as he could tell it, he used the rhetoric appropriate to a philosopher.  The result appeared as astonishing arrogance."

Depression.  Partly my normal temperament, partly unrelenting work-related stress, partly deep aesthetic dissatisfaction with almost every aspect of contemporary art production, including the so-called digital revolution's creation of an inverse relationship between the size of one's audience and the ability to earn a living from one's creative work.  To quote Bill Watterson,  "Anyone can publish now, and there are no restrictions of taste, approach or subject matter. The gatekeepers are gone, so the prospect for new and different voices is exciting. Or at least it will be if anyone reads them. And it will be even more exciting if anyone pays for them. It’s hard to charge admission without a gate."

"This demand for a standard is of the essence of Socratic dialectic, which is directed not merely toward abstract understanding, but toward the right ordering of life.  The aim is to grasp the principles of that order, and to be able to identify them in concrete cases.  The Republic claims that it is important to know what is holy and what is just and what is virtuous, because on that knowledge depends the conduct of a life.  In the Charmides, the young Charmides is said to be most temperate; but without knowing what temperance is, he will have no advantage from its presence in his life -- this to a man who later became one of the Thirty Tyrants.  If the aim of dialectic is to define a Form, the practical aim is the discernment of form in things.  Forms are to moral matters what scales are to weight and yardsticks to length -- a basis for sufficient decision." (Allen, "Comment on The Euthyphro," Dialogues, Vol. 1)

Those desert plant pictures? Discernments of forms in things.
- posted by cjb @ 10:07 PM

"She wasn’t copying the works—at root, a photographic process—but instead repeating them, mastering the actual techniques involved in their creation in order to make works that would look and feel as close as possible to the real thing. 'She adopted style as her medium,' is how MoMA PS1 curator Peter Eleey explained it to us when we called him. 'At least early on, most of her work looks like other people’s work, which makes it very challenging to describe and discuss.'"
- posted by cjb @ 1:44 PM
Sunday, March 23, 2014 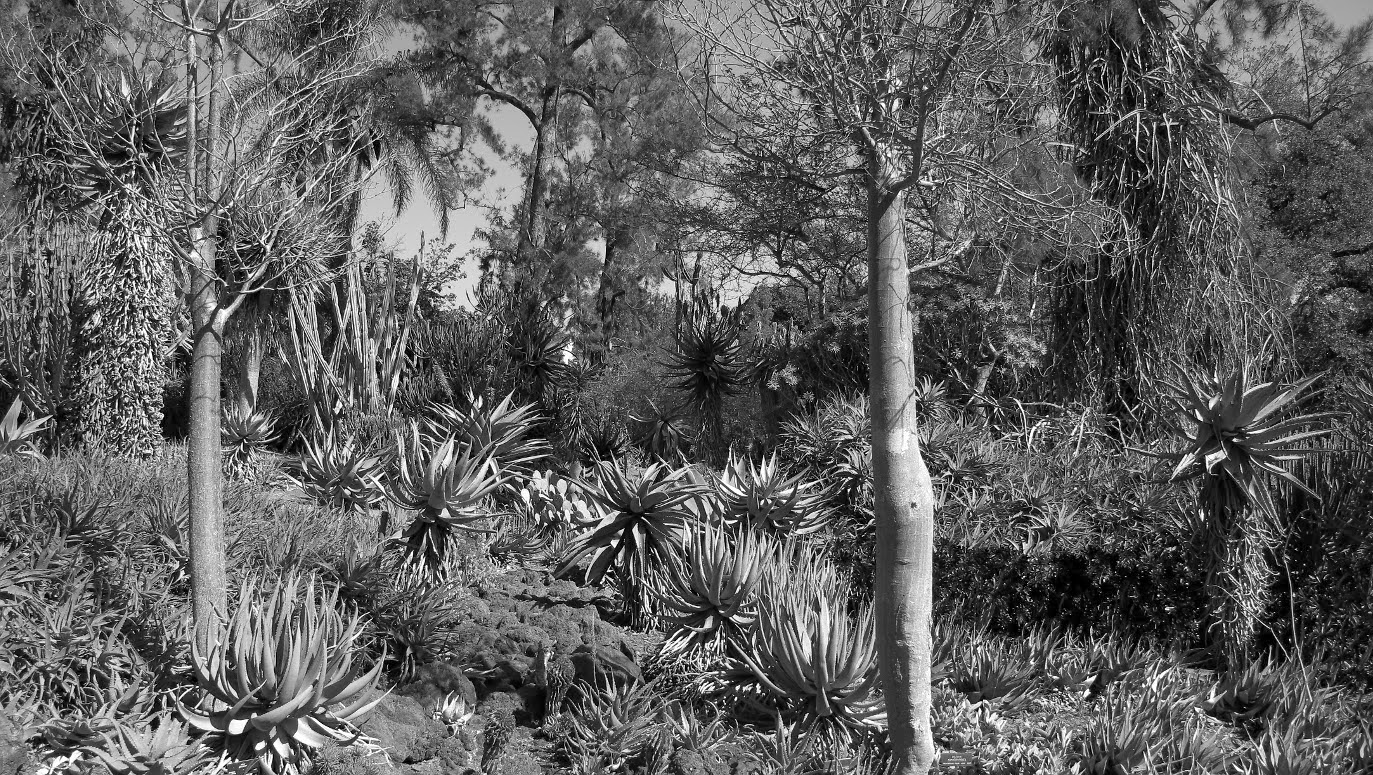 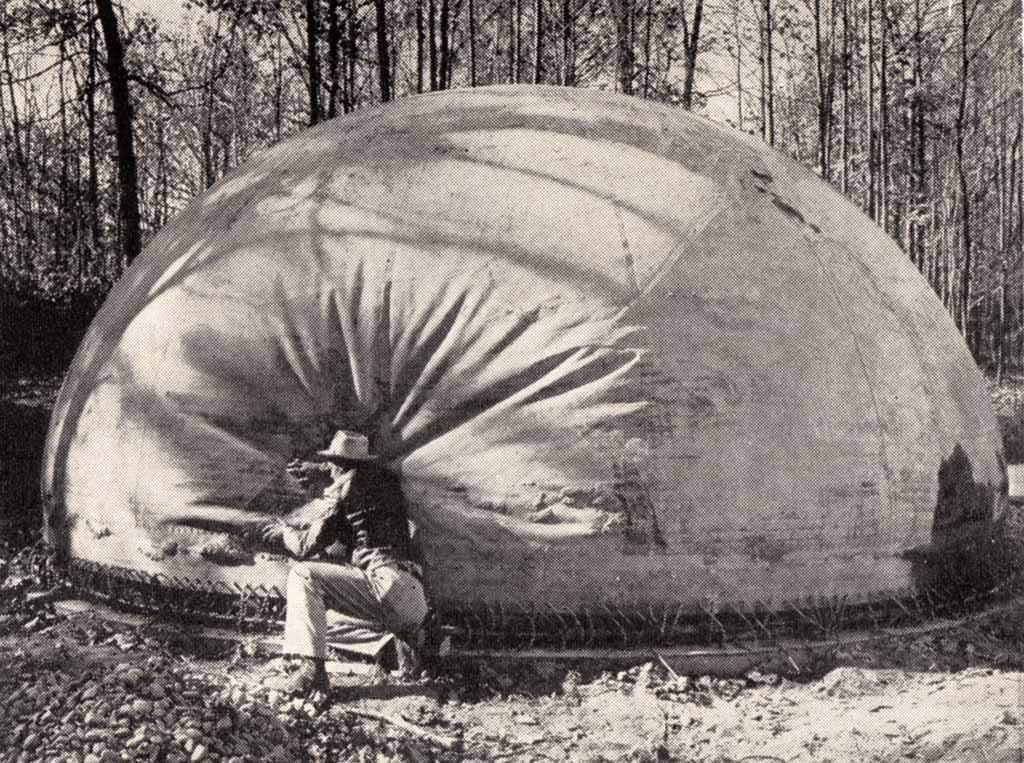