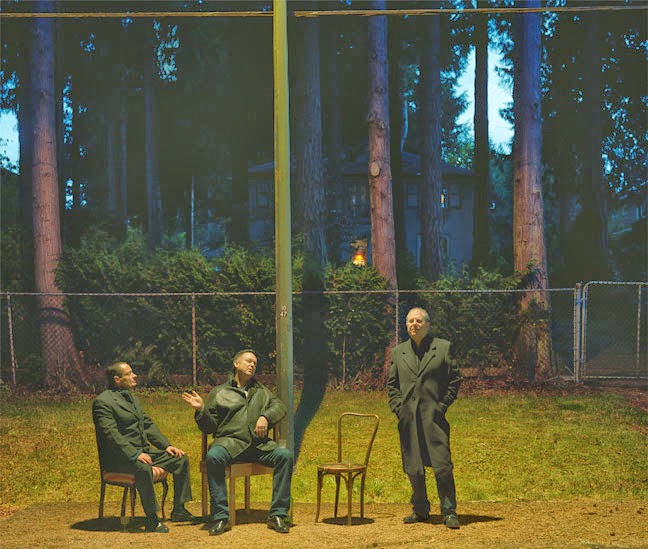 Jeff Wall, Monologue, 2013.  Late blue sky.  The streetlight, the chairs, & the figures all put me in mind of Beckett:  "A road.  A tree.  Evening."  The right hand figure is better dressed than any of 2006's waiting men, but his posture belongs with theirs, turned out from immediate circumstances into more generalized contemplation.
- posted by cjb @ 4:25 PM
Thursday, March 13, 2014 John Humble, Fire Hydrant, Pico Boulevard, 2013.  The best of his pictures at the Craig Krull Gallery.  This photograph puts photojournalism into play in a curious & understated way; it's kind of a thematic bookend to Joel Sternfeld's Exhausted Renegade Elephant.  The juxtaposition of the fountain with the working class or homeless pedestrian with the cart in the foreground is striking.  In this moment we glimpse the breakdown of one of the "seamless systems"  of the modern city, and the studied indifference of at least one citizen to that breakdown.  What might account for this indifference?  Living with breakdowns on a weekly, daily, or hourly basis.  So for some citizens the picture is photojournalism, a Richard Scarry-esque document of a momentary glitch in Busytown, and the hard-working citizens responsible for fixing it, while for others it's clear evidence of a system that doesn't work for everybody, an ongoing revelation of Busytown's precariousness, a place where everybody is, at least in theory, primed to spectacularly blow.
- posted by cjb @ 10:22 PM

A:  It's a Ukrainian Orthodox church that looks really old but was actually built by hand, and by reference to photographs of older Orthodox churches, in the early 1950s.  It's now located, through no fault of its own, on the scariest block on the Lower Mainland.  In some sense it's a self-portrait.

A:  Late 2014 or early 2015.  A mix of color & black and white work.  Right now it looks like this: two cactus pictures, two California pictures, two collages, one Street View or pure appropriation, and Boys Walking.

Eight pieces feels like a lot.  I wish that Haddonfield and the Duel collage were further along, and that they were better than they are.  But maybe one of the benefits of being an obscure artist is not having to produce for the market.  I can just make and show the pictures that I think are the best.

Q:  What will be worst about the new show?

A:  There might be too many black and white pictures without any figures in them.  Of course for me yuccas and cacti and scraggly oaks are figures, but the art world's more conservative.

Q: What will be best?

A:  The kids in Boys Walking.  Some of the spaces in the collages.

Q:  What are you going to make next?

A:  Some color pictures in working-class neighborhoods in Surrey and Los Angeles, and, equipment willing, a portrait of a tree and people sheltering beneath it in Lahaina, Hawaii.  While in LA, I saw a retrospective exhibition by John Humble, mostly large-format color photographs made along Pico Boulevard.  I didn't like many of the pictures, finding their compositions too static and the colors too dialled-up, but I also felt that they exposed a real flaw in my work, making my photographs seem tasteful by comparison, too much like "art photography" and not enough like actual lived experience.  John Humble knows LA and I know Vancouver and maybe the Huntington Desert Garden, but I obviously don't know enough about Hockney's desert intersection or that south Pasadena hedge or the other subjects I've photographed still governed by ideas of what they might mean to me, ideas which, needless to say, haven't materialized in the finished pictures on the level of form.  At least not yet.
- posted by cjb @ 10:14 PM
Sunday, March 09, 2014 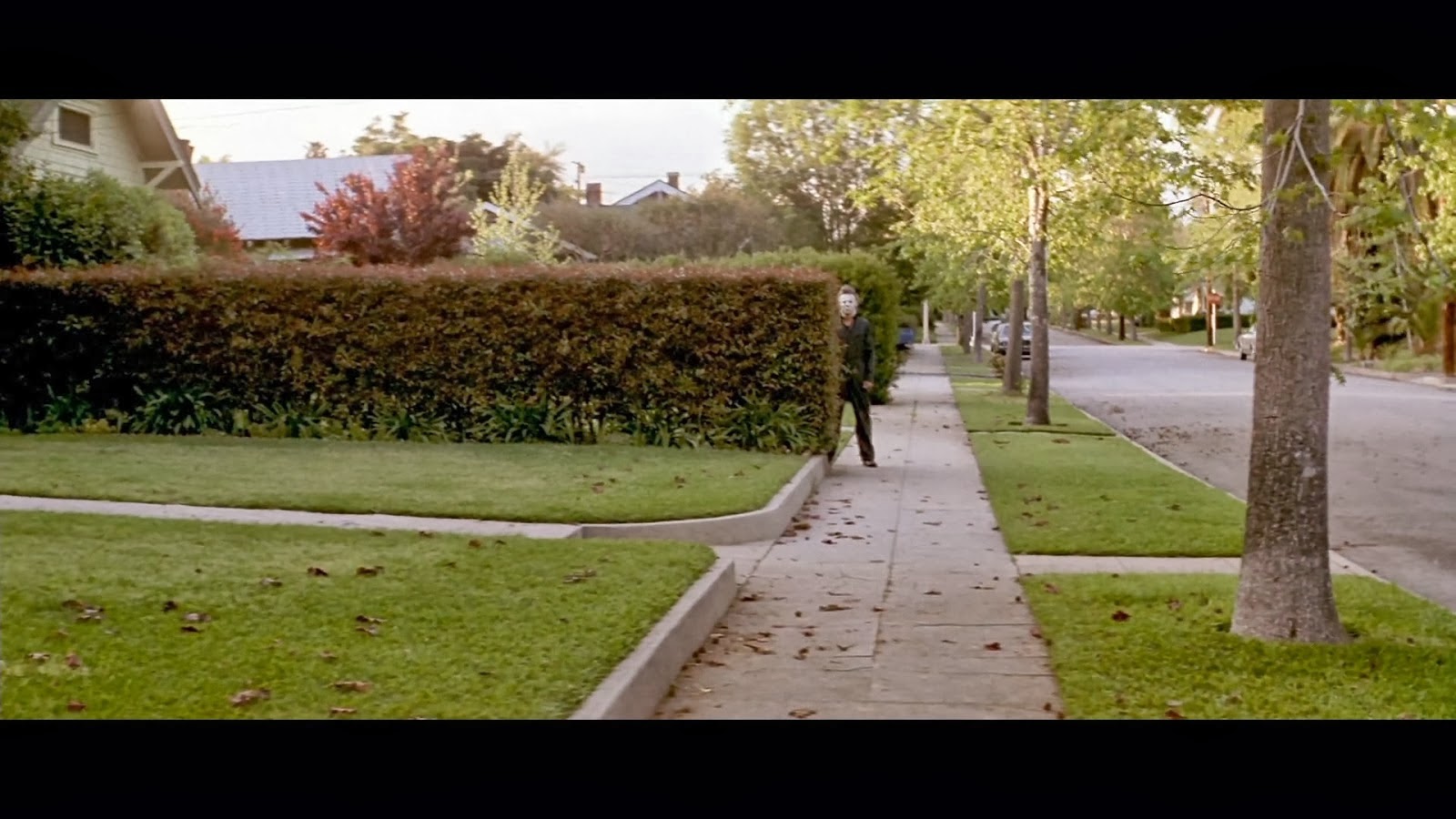 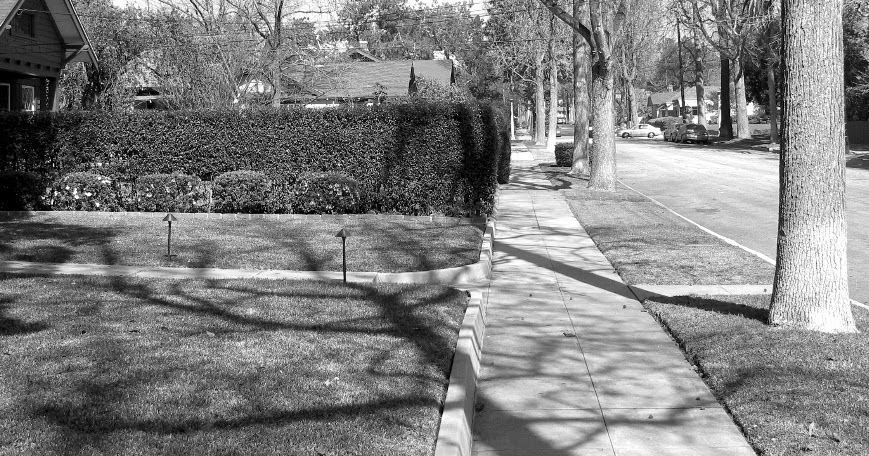 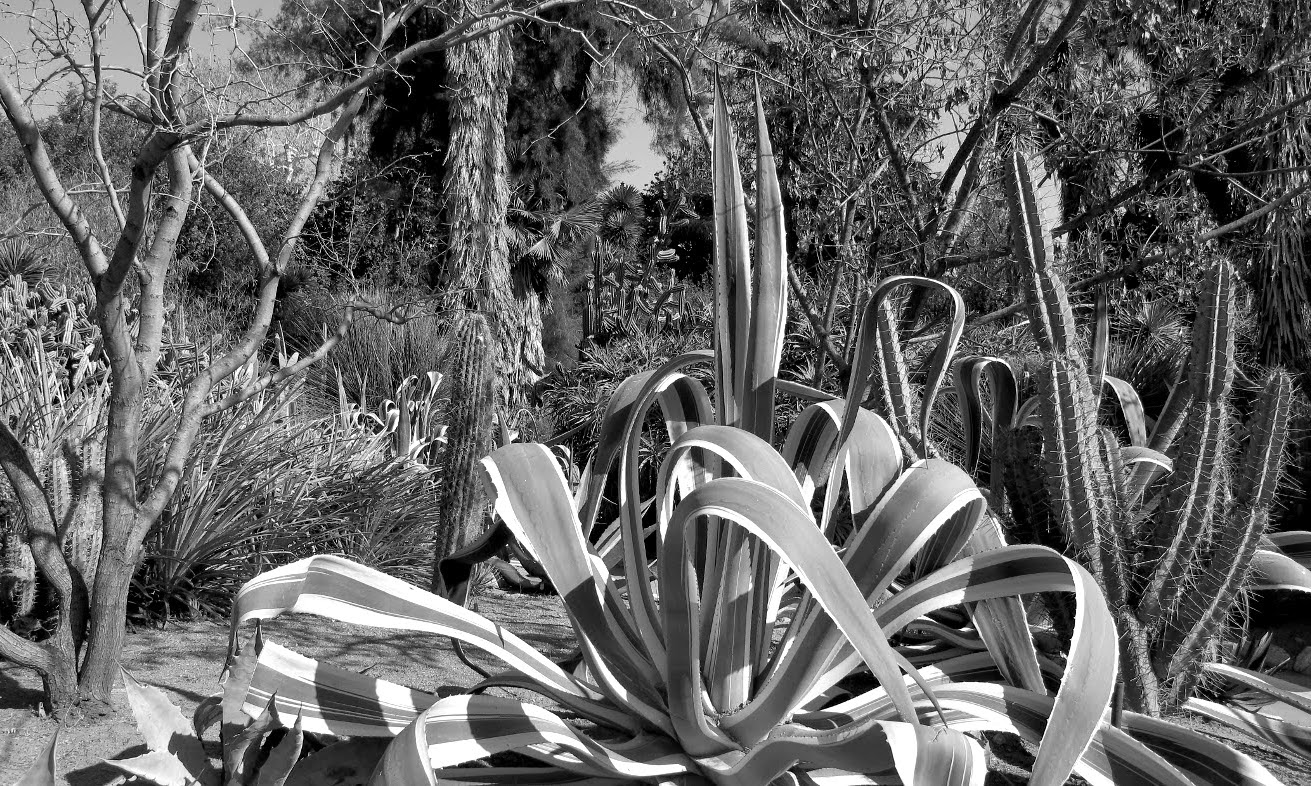