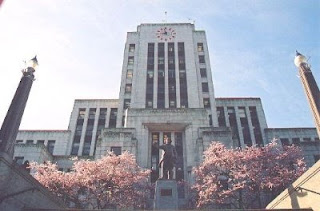 To the polling station in the retirement centre lobby, to do my civic duty. Long line-up. Total confusion. Peppy university-age kids, each equipped with a POLL CLERK nametag, attempting to explain both sides of the 8" x 14" ballot to folks with limited problem-solving skills.

LOST WOMAN [gesturing at her entire ballot]: So I elect one of these people mayor?

LOST WOMAN: Don't get snippy with me!

Line-up to receive a ballot and a special marking pen. Line-up for the flimsy cardboard "voting booths" that supposedly protect one's privacy and independent judgement.

CJB: Look, can I just mark my ballot in line and get out of here?

Argument between two guys marking their ballots ahead of me in the line-up:

YOUNG MAN: Who asked you? Mind your own fucking business.

OLD MAN: I'm going to have you removed!

CJB: Sir. Could you dial it down, please? I'm trying to mark my ballot.

OLD MAN: You too! You...communist!

GUY IN LINEUP: What do I do with my ballot?

CRANKY OLD MAN: This reminds me of the US of A! Dick Cheney's gonna steal this one for Peter Ladner! Just you wait!

IRATE LINEUP GUY: I'm not leaving until my vote is properly recorded!

CJB's SWEETIE "L." [waiting patiently, at the car]: So did you have fun voting?

CJB: What a gong show. The stuffed pussycats could run an election more effectively than the City of Vancouver.
- posted by cjb @ 6:18 PM
Tuesday, November 11, 2008 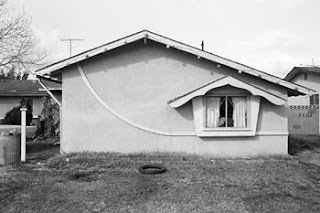 "I was a student at UCLA, living in Reseda. I was studying with Robert Heineken. At the time, nobody in the UCLA photography department had a camera, or if they had one, they didn’t use it. Everyone was doing gum-prints and blueprints, and so was I initially, and I remember looking at this gum-print I’d just made—it had this fetus floating in air along with elephants and so on, and I thought to myself, 'Why should I care about any of these things?' I didn’t have any answers for why I had chosen this iconography other than that it was vaguely fantastic. So I decided that I would start photographing my neighborhood because at least it had an immediate connection to me.

Initially, I thought up the conceit that I’d been dropped from outer space, that I would be completely objective. But, of course, I had no criteria for this objectivity, and I wound up being formal. I made photographs of abstract garage-door designs, bushes next to other bushes that made interesting formal patterns. Then, at some point, I became interested in images of women watering their lawns; I gave up on objectivity and totally dove into subjectivity. . . ."
- posted by cjb @ 9:01 PM
Monday, November 10, 2008 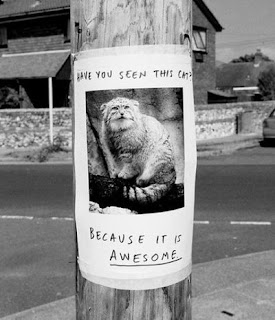 Two Yaletown women walk a wee white wooly accessory dog on a very long leash, like tugs towing a barge. They pass a young bearded Quebecois guy sitting crosslegged on the sidewalk, brown felt spare-change hat upturned on the ground before him. No eye contact, no recognition. They walk on. The dog trots up, sniffs the Quebecois guy. He smiles, ruffles the dog's head. Visibly pleased, the dog scrambles into the guy's hat. Squats. Shits. You fill in the rest.
- posted by cjb @ 10:56 AM
Sunday, November 09, 2008

ACT (Aesthetically Claimed Thing): Per Kirkby's "moving picture" chapter heads, from Lars Von Trier's Breaking The Waves. Seeing them strung together like this blunts their impact; they're really meant to be seen on a big screen, seperated by fifteen or twenty minutes of gruelling handheld video. These had an enormous effect on me when I first saw them, easily equal to The Crooked Path or to Rackstraw Downes' paintings.
- posted by cjb @ 11:13 PM

CJB: "Art is a social construct, one with its own history of judgment, with which any artist worthy of the name must be intimately acquainted. Thierry de Duve, the best living art critic I know, calls this history the 'jurisprudence' of art, and suggests that, just as lawyers study the structure and logic of historical judgments, artists must familiarize themselves with the evidence and decision-making processes by which a work like Duchamp’s Fountain was first accepted as art. For artworks, at least ones that participate in the modernist tradition, are experimental propositions that put the whole concept of art into question."
- posted by cjb @ 9:59 PM

"She said, 'We're alike. We weren't before, you were holding back, but now we are. You and I.' She said, 'Could you pass out complimentary tropical punch in little plastic cups? That's my alternative and it's unacceptable.'"
- posted by cjb @ 7:19 PM

Writing: Aesthetic Judgement and The Representation of the Everyday, for Jen.
- posted by cjb @ 11:38 AM