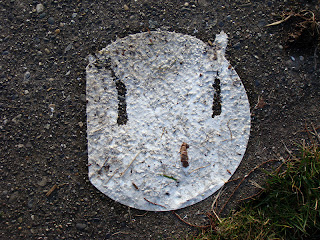 As sick as I've been in over ten years. Still no appetite to speak of, muscles knotted from scrabbling around on the bathroom's tile floor in the wee hours of the morning. No strength in my legs or arms. An old man's gently rolling gait down to the bus, one-foot-carefully-in-front-of-the-other. Plus lots of other symptoms we won't dwell upon here. Likely diagnosis: Captain Trips.

Lots of notes from well-wishers, Tolagson and the cats' co-owner among them. And, just now, the shy little fellow above, caught unawares by Mr. Keith Freeman, in today's unexpected and brilliant sun.
- posted by cjb @ 7:47 PM
Thursday, February 14, 2008

I have the flu. Deep muscular ache, sweats, repeated throwing-up: the works.

There's nothing like lying curled on your bathroom's cold tile floor, reading Le Carre's Honorable Schoolboy in between bouts of violent vomiting, to reintroduce a little humility to your life.
- posted by cjb @ 9:30 AM
Tuesday, February 12, 2008 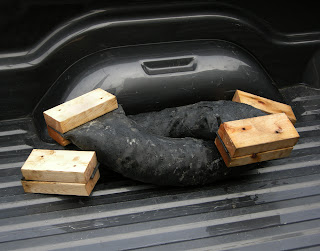 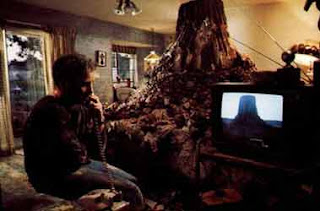 Christopher Brayshaw is an independent Vancouver-based writer, critic, curator, and photographer. I spoke with him in Vancouver in October and November 2007, with followups by phone and email in January 2008. -- TH-C

TH-C: Recently in Vancouver I was able to research some of the more extravagant claims made on your website. Your periodical criticism is represented in the artists' files at the Vancouver Art Gallery and the University of British Columbia: short descriptive essays focused on younger, or at any rate less well known, regional artists. Catalogues, too, though one gets the sense that they were produced quickly, and probably -- you don't mind me saying? -- on a budget. But what is more problematic -- what I could not substantiate, despite copious looking -- were the repeated claims you make about exhibiting your photographs and performances. I feel confident saying, the only one who sees these things is you.

CJB: That experience might be fundamental to the work. When I studied art history at UBC in the early 1990s, one of the classes I took was a graduate seminar with John O'Brian, on Conceptual Art. I was particularly struck by works that we'd now call "hybrid forms": some of Smithson's more outre sculptural proposals, Lawrence Weiner's statements, things like that. The notion that a work could simultaneously exist as a physical object, and also as a description of or a proposal for an object that might be close to, but not exactly physically identical to, its prior manisfestations was exciting to me. Flavin's fluorescent fixtures, or at least Dan Graham's description of Flavin's fixtures, were also important. You know, the idea that the work exists as a diagram or schema, one that can be built, dismantled, and built again with different standardized units.

If you remove a painted panel from an Ellsworth Kelly or a Gerhard Richter mosaic painting, and replace it with a visually identical panel, it's pretty obvious that you've fundamentally altered or destroyed the work. On the other hand, only an idiot would claim that a Flavin made with "new" fluorescent fixtures somehow corrupts the artist's intent. The lamps burn out; they're meant to be replaced. Flavin didn't neccessarily perceive aesthetic distinctions between the interchangable units his sculptures are made from. This is a pretty powerful line of thinking, one that finds correspondences with Weiner's famous statement about his work. You know, THE ARTIST MAY CONSTRUCT THE WORK, THE WORK MAY BE FABRICATED, THE WORK NEED NOT BE BUILT. Weiner says each of those three conditions are equal to his intent; he doesn't prefer one over the others. So would it help if you had an invitation card or an installation shot? I mean, what difference would it make? What would proof change for you?

TH-C: Surely, though, you acknowledge a difference between Flavin's lamps or Andre's firebricks and your photographs, which -- despite your confusing claim for their participation in a "conceptual" lineage -- are actually governed by a conservative pictorial logic that Conceptual Art sought to displace or overturn.

CJB: I don't agree. It's true that the Linguistic Conceptual Art of Kosuth, the Fox group, & etc. sought to eradicate -- or at least decenter -- "the pictorial" as an aesthetic category. But Conceptual Art, or at least my reading of it, is much more heterogenous than what you're arguing here. Artists like Graham, Smithson, Mel Bochner and Ed Ruscha joined the Conceptual critique of "the pictorial" to drawing, printmaking, and photography. I don't see how the text of Smithson's and Bochner's "The Great Bear," for example, could be considered apart from the images strewn around it. Ditto Smithson's "Monuments," ditto Graham's "Homes For America," ditto Ruscha's Royal Road Test. Conceptual Art was and is more formally varied than your after-the-fact reconstruction of it.

TH-C: Linguistic Conceptual Art was not the movement's only manifestation, true. But conceding this point by no means invalidates my critique of your somewhat incredible equation of your photographs with the industrially fabricated, serially produced units that Andre and Flavin employed in their sculptural production. If one accepts what you are saying at face value, it follows that you do not draw any aesthetic distinctions between your pictures. But you often criticize your production, saying in effect, "This picture is not as good as that one." So on one hand you imply that your pictures are standardized units, while, on the other, you continue to judge them by aesthetic criteria that Conceptual Art aimed to overturn. You can't have it both ways! Even Ruscha and Smithson sought to problematize the conditions under which their photographs were, or were not, accepted as aesthetically successful, as art.

CJB: Well, maybe I'm operating under a prejudice: I like objects. Even Kosuth's. I saw his Five Words in Blue Neon in New York in 1992 or 1993, where it had an immediate, visceral effect on me. His photostats and texts I liked a lot less; they had that "air of the crypt" to them, that dry and slightly dusty smell that a lot of Linguistic Conceptual Art now seems to exude. I came to the visual arts as a writer, but quickly intuited that xeroxing linguistically tricky sentences wasn't going to cut it. Nor did I want to be a graphic designer, typographer, or archivist. Not that there's anything wrong with those jobs, outside of the recognition than I didn't think I could bring any particular passion to them. Flavin, Weiner and Andre were all still making objects, or, in Weiner's case, at least allowing for the possibility of making objects. What set those three apart for me was their recognition that their objects were embedded in larger reception-and-distribution systems. Each of them considered how the objects they designated as "sculpture" would enter, transit, and occasionally exit a larger social economy. No one thought they were making something whose permanent resting-place was a climate-controlled, trustee-funded box. Weiner, in particular, had thought long and hard about the social systems his works circulated in. One of the first things I made when I tried my hand at "making art" was a Weiner "Public Freehold" piece.

CJB: No, I took the text to a sign shop and had it cut in adhesive vinyl. But I'd given the shop the wrong measurements and what I got back was more like a Spinal Tap Stonehenge or a Richard Pettibone Weiner: a little ribbon of sixteen-point type. I put it up on my bathroom mirror in my old Kitsilano apartment.

CJB: One of my older American cousins used to play semi-professional basketball. When we visited his family I saw his bathroom mirror, which had all kinds of motivational slogans tucked into its corners, as a spur to better performance. I thought that by forcing myself to live with my failures, I might gain a better sense of what I was doing wrong. Later on I tried making copies of works of art that I desired but couldn't afford. Nothing ever came of my Judd stack or my Levine knothole painting, outside of friends' private amusement. I turned out to be useless at measuring, cutting, fitting, and most other basic trade skills. Sometimes I used the wrong tools all together. Ron Terada almost wet himself laughing when he saw a seventy-coat sky-blue monochrome that I'd painted with a 1/4" brush. 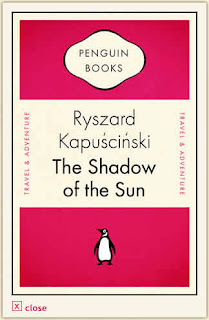 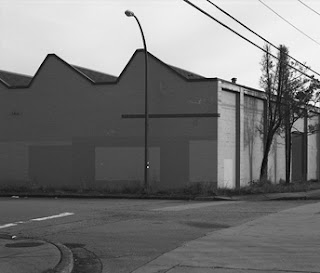 Courtesy Mike Grill. Apparently I'm not the only admirer of Vancouver's most widely photographed corner.

Someone else writes to ask if yesterday's photographs are "pictures." Yes, but not aesthetically claimed ones. More like sketches or studies.
- posted by cjb @ 9:37 AM
Sunday, February 10, 2008 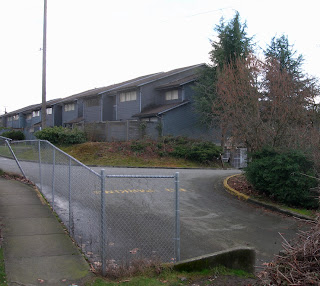 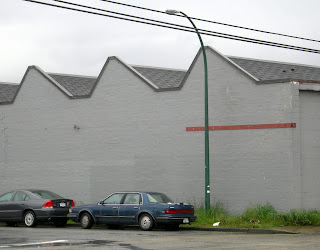 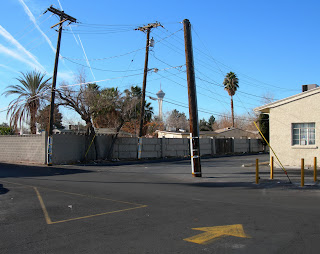 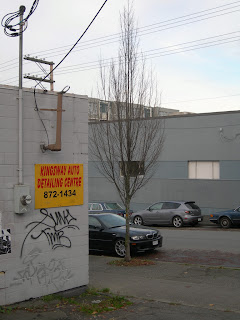 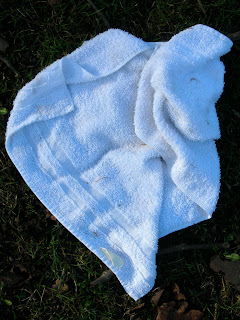