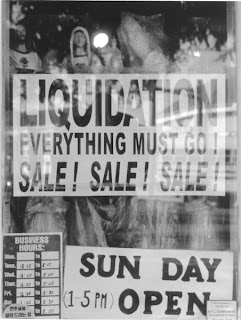 "Martin J. Whitman, a professional investor for more than 50 years, said that as long as economies worldwide could avoid an outright depression, stocks were amazingly cheap. Mr. Whitman manages the $6 billion Third Avenue Value fund, which returned 10.2 percent annually for the 15 years that ended Sept. 30, almost two percentage points a year better than the S.& P. 500 index. The fund is down 46 percent this year.

'This is the opportunity of a lifetime,' Mr. Whitman said. 'The most important securities are being given away.'"
- posted by cjb @ 5:47 PM