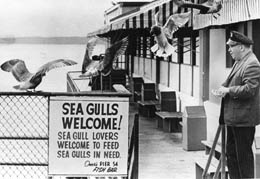 On the road south, Arthur Russell on the deck, in search of mass market paperbacks.

Stephen King: "When you're young, optimism is a perfectly appropriate response to failure." 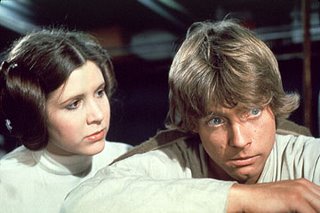 Here it is ladies, I am a 26 year old fanboy who has acquired a Leia bikini from Star Wars Episode 6, Return of the Jedi. I want a voluptuous woman to fill this out so I can fill her out. Sense of adventure appreciated, this is my lifelong fantasy and I don't care how old you are, just above 18. No bullshit please, this is serious and I would appreciate serious e-mails only. Please send me your pic and I will return with mine."

(Unusual spelling and diction preserved in situ; Mark Hamill (above right) visibly traumatized at the prospect)
- posted by cjb @ 9:40 PM 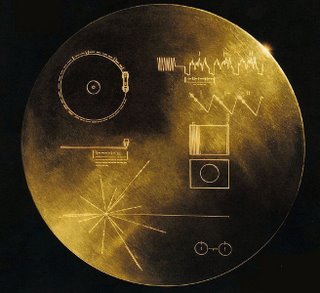 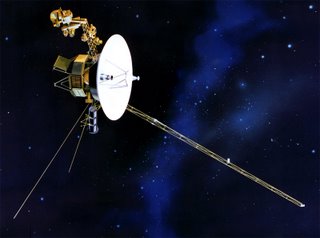 Bernadette used to joke that I'd never come out and actually claim depression, always preferring my inner weather to simply map itself onto the world. There's a certain slant of light, & etc. McCarthy's The Road turns out to be a pretty accurate mental map of what that inner weather looks like, all dirty radioactive snow, grey clouds, and iron-colored breakers rolling in off the Gulf of Mexico. The landscape's looked that way for so long that I sometimes forget there's an outside. Then something good happens (sunset in Garibaldi Park; a McCarthy sentence; an unusually attentive Toronto audience) and the world shivers at its edges.

(Cohen's crack that lets the light in)

What would it take to make you happy?, asked one of the staff the other day, genuinely puzzled.

Diminished expectations, I guess, though total lack of expectations smells like cynicism to me. I suppose creative productivity (business ownership; gallery managing; elevation gaining; stock tracking) is a fundamental gut-level response to depression. Evidence of oneself. Or, at the very least, fuel for projects to gain enough velocity to climb out of the emotional gravity well surrounding Planet Christopher and start their journey someplace new.

Michelina is a Voyager spacecraft. The photographs are, too. Ditto the "art criticism." 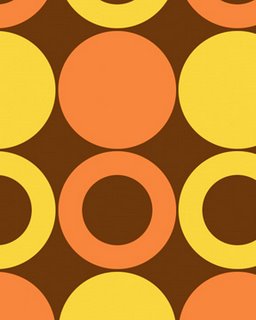 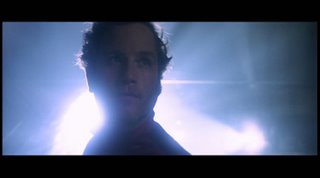 "In another cubicle, Neary was now dressing in a red jumpsuit similar to the astronauts'.

'Mr. Neary,' the M.C. was saying, 'our staff has prepared just a few basic documents that need your signature. This first just states that you have requested special status within the Mayflower Project of your own volition and have not been coerced into participating.'"
- posted by cjb @ 8:33 PM 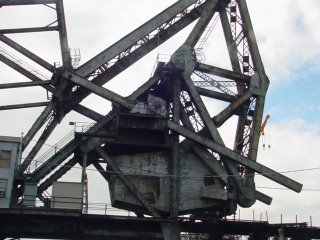 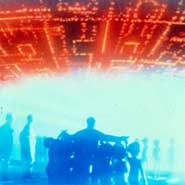 Not a typo. For the longest time I've been trying to work out the repercussions of First Contact being made not with political leadership, nor with the military-industrial complex, but with a visual artist. Then, the other night, riding Skytrain, I glanced out over Metrotown's lights and had an exceptionally vivid memory of Spielberg's little grey guys leading Richard Dreyfuss up onto the mother ship. How, I wondered, would things change if that was Rodney Graham, and not a telephone lineman, getting on board? Uncommon Carriers, John McPhee's new collection of New Yorker essays, provided a point of departure. I still can't write short stories to save my life, but apparently have no such problem transcribing art criticism from the future.
- posted by cjb @ 9:45 AM