"Early in the morning on Monday, September 19, a Seattle Police Harbor Patrol boat came across a desert island floating in Lake Washington. On the island were foam rocks, a fake palm tree, a plastic crab and starfish, real coconuts, and three men in ripped-up business suits. One of the harbor patrol officers started asking questions: How long are you going to be shipwrecked? What are you doing? Are you trying to raise money? Do you need anything?"
- posted by cjb @ 9:50 PM
Friday, September 23, 2005 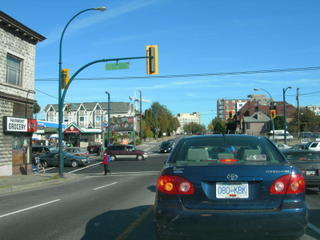 I don't really consider myself a modern pop music fan, yet here I was this afternoon, surprising myself by singing this out loud word for word in the car:

You may tire of me as our December sun is setting because I'm not who I used to be
No longer easy on the eyes but these wrinkles masterfully disguise
The youthful boy below who turned your way and saw
Something he was not looking for: both a beginning and an end
But now he lives inside someone he does not recognize
When he catches his reflection on accident 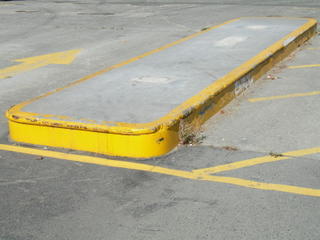 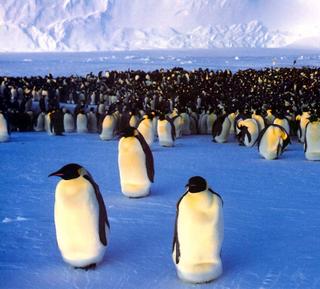 To March of the Penguins.

Midway through the 3rd or 4th 70 mile trek across the pack ice the grande Americano I had drunk on the way to the theatre caught up with me, and I got up for a brief excursion.

Just a few steps and my fast-asleep right leg buckled under me. I fell down face-first in the aisle, creating a noisy and unanticipated distraction.

With my right knee now completely trashed, I am doing my own convincing imitation of the penguins' rolling walk.
- posted by cjb @ 9:46 AM
Thursday, September 22, 2005 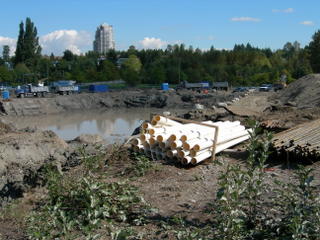 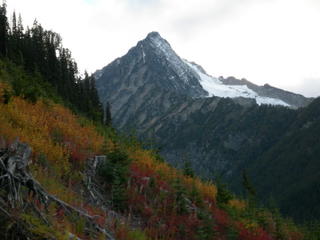 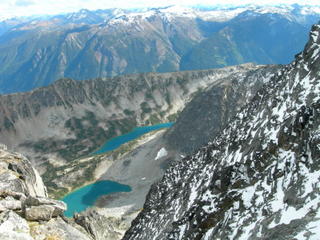 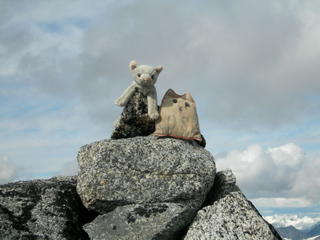 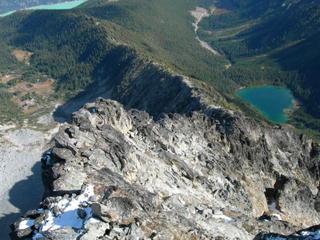 NE Ridge, Mount Sloan, from about halfway up. Lower Ault Lake at right. My clapped-out Subaru is parked at the end of the logging road just below the lake.
- posted by cjb @ 10:12 PM 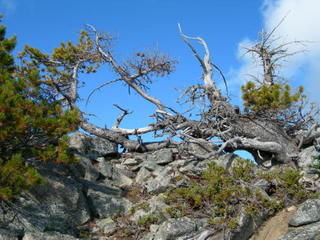 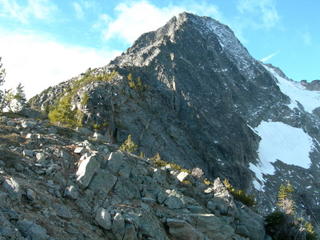 
Dru and I went to climb Mount Sloan’s NE ridge in summer 2000. We did $900 of damage to the rental 4x4’s running board by mistakenly driving it up the Green Mountain spur instead of up the Ault Creek road. Oops! Upon finally arriving in Ault Creek, we were bombarded by mosquitoes and black flies. The bugs were bad enough that we slept in the back of the car. The next morning, Sloan was scarcely visible through the clouds. We crossed Ault Creek, bushwhacked up to the toe of the ridge through the dripping forest, and had just hit the start of the 3rd class climbing when rain, wind and fog all arrived more or less simultaneously. Back to the car!

I kept looking at pictures of the NE Ridge. Some day…

In late summer 2005, Denis Blair and Ted Oliver did Sloan as a daytrip and posted a nicely illustrated trip report on clubtread.com. A week or two later, I bought dru’s old rusted-out Subaru wagon, and was suddenly mobile again after 15 years without a car. Time for a rematch with the NE Ridge, I told myself. With good weather in the forecast, I drove up to Railroad Pass late on Tuesday night and camped at the Semaphore Lakes trailhead. Uneventful, save for a guy roller blading down the middle of the Whistler-Pemberton highway at 11:15pm.

It froze hard overnight, and I spent a few minutes scraping the car’s windows in the morning. Off at sunrise to Ault Creek. Midway up the access road, I met a 4x4 coming back down. I pulled over to let it by, and the driver stopped and rolled down his window.

Together we drove up the road and into the Ault Creek valley, where the road has been extended several kms. from where it was in 2000. There’s a bridge across the creek, and the road immediately forks, with the left hand branch going almost to the headwall below Lower Ault Lake, and the right fork climbing up onto the toe of the NE Ridge. Parking at the end of the left hand fork makes sense if you are not reversing the ridge climb, because that way you are saved a several km. walk and the corresponding elevation gain to reunite yourself with your car at the end of the day.

"Sure, but I’ll probably be a lot slower than you.”

We packed up and started bushwhacking up toward the NE Ridge overhead. At this point, I had made two mistakes, though I didn’t know it: I hadn’t brought a helmet, which wasn’t the world’s brightest move on a 4th class ridge climb with lots of loose rock, and I left my ice axe in the car, taking only my trekking poles, because only the N face appeared to have snow on it, or so it seemed.

The bushwhack up to the ridge went very smoothly, about an hour of travel through open forest, with lots of mushrooms on the ground. I saw emetic russulas, wooly pine spikes, and some nice looking boletes, as well as lots of others I didn’t recognize. I also threw up several times, and was troubled by a strange ringing sensation in both ears, which I put down to lack of sleep and no coffee.

We reached the ridge and started up toward the start of the technical scrambling. As expected, Chris was anywhere from 20-45 minutes ahead of me all the way to the summit. I threw up again, and was starting to feel pretty dizzy, and concluded that I was coming down with the flu. However, turning back didn’t seem to make a whole lot of sense; if Chris didn’t see me turn around, I was sure he’d worry about where I’d gotten to, and I didn’t want to freak him out, or to accidentally initiate a search and rescue callout. So I continued up the ridge.

Obstacle 1 is a large gendarme on the ridge which is passed on its left hand side. The route then climbs steeply up toward two huge distinctive rock towers on the ridge. A combination of a steep, dirty gully and a hidden cleft in the right hand side of the right tower made a nice 3rd-4th class route above these obstacles.

The route grows more difficult after the towers. Above them, there is an exposed walk along the ridge crest. The way was now plastered with ice and snow, and I had serious reservations about continuing on the crest, even though Don Funk’s bivouac.com trip report suggested that this was the way to go. Instead I made some funky low 5th-class moves down off the ridge, scrambled along below the crest on the south face, and then back up again and along.

By now I was also shivering, dizzy, and coughing up chunks of yellow phlegm. Not a great combination, and I paid less attention to the view than I would have under normal circumstances. That said, I was pleased with how confidently I was climbing, and with the rock on the ridge, which, when not rimed with snow and ice, was rough and very textured, with an abundance of holds.

The next obstacle was a steep gap just before the summit tower. There were rap slings here, which didn’t exactly fill me with good feelings. Still, the rock looked sound, so I made some more low 5th class moves down into the gap, only to discover, once down, that an easier route exists on the right hand side of the crest, where a hidden ledge system leads easily down to the same point.

I scrambled up the summit tower with Chris peering curiously down from above. This was pretty hard, because by now there was snow and ice everywhere, and the rock was slippery and dangerous. I tried to ascend the north side of the tower, and got stuck about three quarters of the way up on narrow ice-covered ledges. By this point I was pretty gripped, and not having too great of a time. “Think,” I berated myself. “Don’t be an idiot. Look for the easiest way up.” In this case, the “easiest way” involved downclimbing about thirty feet, then contouring around on a series of ledges to the south face, where a staircase of blocks stretched up to the big summit block.

We only stayed on the summit about ten minutes, then bailed down the south face into a large gully directly below the summit tower. This gave a quick 3rd class descent, but was very loose, and we travelled a ways apart so as to avoid knocking stones down on each other. There are several nasty short walls in the upper end of the gully; in each case, we traversed east to reach easier ground before continuing down. Soon the snow and ice gave way to scree and a small stream, running easily over water-polished ledges. The stream bed steepens near its base, and we passed these bluffs via a ledge system on the right hand side.

We then hiked easily down a moraine to reach the sandy, pumice-covered shore of the upper Ault Lake. This area, with its sand dunes, huge boulders, and peaceful, fluorescent-blue lake, is one of the prettiest places I’ve seen this year.

We easily traversed the east shore of the lake, then scrambled down beside its outlet stream, eventually crossing to the west bank, where we soon picked up a flagged trail. This trail follows the west bank of the creek all the way to the lower Ault lake. Recent trail work has taken out many small trees and deadfall, but there is still some work to be done to pare back the blueberry bushes and shrubs that lean in from every side. The trail skirts the west bank of the lower lake, first gaining elevation, and then dropping back to shoreline near the lake’s east end.
From there, the by now not terribly well laid out trail inexplicably gains more elevation, before dropping steadily into the Ault Creek valley, eventually entering open forest just opposite the end of the clearcut.

At this point, with both knees about to give out, I bushwhacked down to the creek, scrambled across, and clambered up the opposite bank to reach the car. Chris and I chatted, then climbed into our vehicles and went our separate ways. The drive home was uneventful; dinner was coffee and a terrific green salad from the Pony in Pemberton: greens, peaches, black olives, onions, garlic, raspberry vinagrette and some other stuff. $4.50 with a tasty roll; a great deal, and a nice end to a taxing but enjoyable day out in the mountains.
- posted by cjb @ 9:22 AM
Tuesday, September 20, 2005 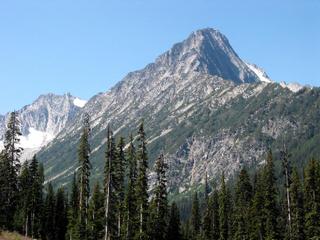 Mount Sloan, northwest of Pemberton, about a 4 hour drive from Vancouver. Tomorrow's itinerary: up the right hand (NE) ridge, down a hidden gully behind the left hand skyline, and out the valley in the centre. Probably the hardest climb I'll do this year, and one that I was skunked off of with Dru a few years back to a combination of lack of fitness and blowing rain and clouds. Back Thursday. 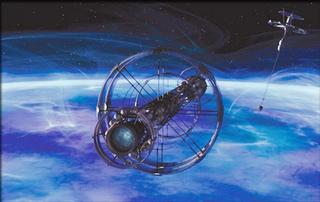 Copy editing to Cliff Martinez's Solaris soundtrack. I had forgotten how good this was until Chris Clarke burned me a copy a few weeks ago. Definitely a highlight of the largely unremarkable Soderberg remake. The early, very quiet scenes of the space station drifting high above the planet are an exception, and on a par with the first thirty seconds of Scott's Blade Runner: a peep through a window into a fully realized other world.
- posted by cjb @ 10:07 AM