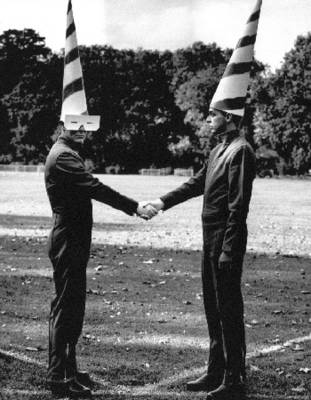 I just googled the eBay address listed below, in order to better assess the suspect's feedback. Lots of glowing feedback from buyers, but just one recent feedback rating from a seller. What, I wondered, could a person with 19,347 hot books in their basement find on eBay that they didn't already own?

"GLOUCESTER -- Gloucester County sheriff's investigators suspect they have a lot of hot reading on their hands.

They're trying to find out if any of the 19,347 books they seized from a Gloucester home April 10 are stolen. The day before, they charged Mary Ann Drake with shoplifting more than 120 books from the Super Wal-Mart in Gloucester, said Chief Deputy Mike Nicely.

An employee reported seeing her fill several plastic grocery bags with books and leave the store without paying on April 9. Drake also is awaiting trial on a charge of grand larceny in Newport News. Nicely said the charge involves the theft of books from a merchant.

After the raid at Drake's house, investigators learned that she had been dealing in books on the Internet market eBay since 1999, Nicely said. The name "nightgo" is registered to Drake by eBay, he said. 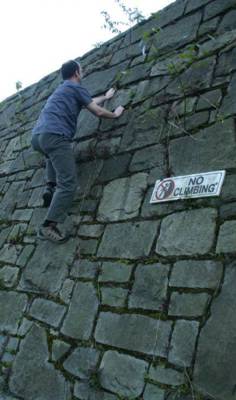 Answers to your most pressing questions:

1. The bissett/Bowering/Reid reading went off without a hitch; full house of 60-odd people, and many books signed & sold. Details forthcoming.

2. The clubtread.com Wednesday walk around the Stanley Park seawall was unexpectedly pleasant; details in due course, and maybe a photo or two as well.

3. Yes, that really is my letter in Nationally Syndicated Sex Advice Column this week, signed just as these posts are.
- posted by cjb @ 8:54 PM
Monday, April 25, 2005

(George Bowering, bill bissett, and Jamie Reid will be reading in Pulpfiction's tiny front room at 6pm sharp on Thursday evening; y'all come if you're in the neighborhood)
- posted by cjb @ 10:32 PM

Here's a problem: what do you do when you're lyrically minded, write (primarily) in English prose, and don't swing? By which I mean, I've been spending day after day with this manuscript, looking back over things I once perceived as finished, thinking, Jesus, maybe it isn't too late to eradicate every copy in existence...

1. That clause up above, "things I once perceived as finished," as plain a piece of lumber as you could want, flat pine board or off-the-shelf 2x4, read, in the first draft, "things I perceived as finished three or four months ago." Which is OK as far as conveying information goes, but then adopts this quacking tone that I detect in every first draft, and in much published work, too. Same thing with "every copy," which read, six or seven minutes back, "every copy of this." This st- st- st- stuttering tone, stating and re-stating and re-stating, just in case anyone missed the idea on the first go-round.

2. Building's an OK metaphor, so's bricklaying. Trades that consist of doing one thing properly, then the next, then the next, and suddenly there's a structure that won't fall down when you put your shoulder against it. A prose paragraph. I keep looking for admirable models of lyrical realism and coming up sadly short. Henry Green, George Orwell, the Updike who wrote the Rabbit books, Dubliners' Joyce, Zukofsky and Wallace Stevens. There are run-on sentences in Saul Bellow's Adventures of Augie March that make me shake my head in amazement every time I read them, but I don't have the showboating lyrical chops that Martin Amis repeatedly quotes in his great Atlantic essay on Augie. What's left? Compression, I guess, trying to pack each sentence dense with information, like the freeze-dried meals they sell down at Mountain Equipment Co-Op. Late 50s Miles, the way the trumpet illuminates the all the empty space around it. Or Carl Andre and Donald Judd, who wring astonishing changes out of 'minimal' materials through contextual placement, or variations of rhythm and scale. As opposed to, say, Ms. Stein and her disciple Mr. Hemingway, or their legions of sadly inbred kids' endless catalogs of "linguistic statements" which, taken together, supposedly constitute "meaning."

(One last model: Roald Dahl's short story collection The Wonderful Story of Henry Sugar, which, along with Danny, The Champion of the World are two books I remember very clearly from childhood, especially for Dahl's long, proto-Sebaldish illustrated essay, "How I Became a Writer", which I recall reading aged seven or eight or thereabouts, trying to figure out how its only apparent stylistic simplicity had been constructed. I've been reading a lot of Dahl lately, trying to pare Michelina's prose back into something approaching legibility, and his seamless construction of certain scenes -- Danny driving the Baby Austin to rescue his poacher father in the middle of the night; the little boy in "The Swan," tied on the rail tracks, waiting for the vibration of the oncoming train -- leaves me wide-mouthed, smitten all over again).
- posted by cjb @ 9:55 PM
Sunday, April 24, 2005

AGGRO RASCIST CRACKHEAD: Go back to your own fuckin' neighborhood!

IRATE BOOKSTORE CUSTOMER: My family lived in the east end for 100 years while your mother was turning tricks in Toronto!
- posted by cjb @ 12:26 PM