Q: Orange and black mini-scorpions? All over my beans? First aphids, now this. WTF!

Working on the balcony at six o'clock in the morning. Grey light, light wind. The tomatoes' coppery scent in my face as I kneel, distributing H20 and kelp emulsion from a green 3L jug that previously held biodegradable laundry soap. I like working around things that silently respond to attention. I once read -- I think it was in Steve Solomon's great Growing Vegetables West of the Cascades -- that garden vegetables and people made a pact long ago, very similar to the one that people and domestic cats made. "We'll give up some of our prickly feral qualities, if you'll take care of us." Or as Solomon says, "You are nature to your vegetables." I don't like working with other people -- collaboration inevitably involves compromise, watering down hard-won core beliefs -- "these fragments shored against my ruin" -- but I like being around living things that demonstrate their appreciation through gesture. The purring cat that turns its head to be scratched; the four foot high balcony tomatoes; the scarlet runner beans that decided to start setting seed while I was away climbing deadfall and are now producing enough pods to keep my whole building in beans for a month.
- posted by cjb @ 10:49 AM
Thursday, August 14, 2008 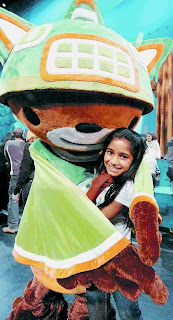 Someone phones to ask if I'd like to attend a meeting connected to the 2010 Cultural Olympiad. And is then -- never previously having spoken with me -- discomfited to learn that my curatorial practice excludes going to meetings, not to mention participating in anything even remotely resembling "a transformative arts and culture program that will create memories and legacies to last a lifetime and inspire a generation."
- posted by cjb @ 4:53 PM

This Just In From Our Hammertown Correspondent

"A lot of pain to find out what everyone knows -- butter improves everything!", sez Pete, viz. mountain climbing alpine bush crashing.
- posted by cjb @ 2:20 PM 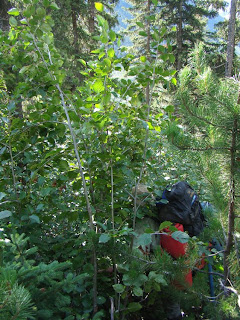 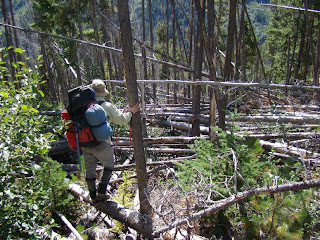 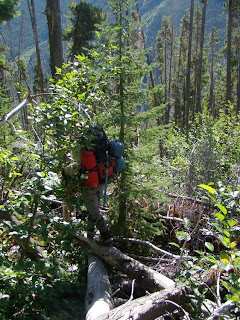 Q: Why are some peaks climbed only rarely?

A: I had the idea to climb Mount Ethelweard for my August vacation, based on the Salal Creek writeup in 103 Hikes, the admittedly sketchy beta in [out-of-date but comprehensive local climbing guide authored by Bruce] Fairley, and some nice photographs of Athelney Pass posted on the VOC [University of BC Varsity Outdoor Club] website. Then I talked to Dru, who informed me that my 2WD Ford wagon wouldn't make it to the Salal Creek trailhead, and that I would be spending at least two of my vacation days hiking in and out on a logging road, not counting the 18+ klicks to the pass.

Back to the drawing board. I got the federal 1:50,000 (J14) for the northern edge of the range and observed an unnamed creek that drains the north end of the pass and eventually flows into McParlon Creek. Hmm. I posted a trip call which garnered exactly no interest and sent Retreads fleeing in all directions. Maybe the phrase "bag night" had something to do with it.

At any rate, Monday afternoon found [clubtread.com regular] Keefer and I blazing up Hurley Pass in my old and creaky Ford, locating the Bridge River FSR [Forest Service Road; eg., gravel surface supposedly traversable by 2WD car], and driving 25-km. west of Gold Bridge, above and alongside Downton Lake. Lots of bear activity; we surprised two huge black bears who did not seem particularly eager to get out of our way, nor to see us in the first place. Many rockfall-dodging episodes and creaky bridge crossings later found us parked at the end of the thoroughly deactivated McParlon West FSR.

By now it's late afternoon as our heroes suit up and start the 3.5km. trek to the end of the road, passing through regrown clearcuts full of blueberries, wild raspberries, and bear and cougar scat every five or ten yards. Lots of good views of the mysterious unnamed peaks west of Mount Vayu to the east; views of Salal Peak's icefields (?) to the south, and a huge dark wall of rock with a massive glacial moraine attached to it to the southwest, which might or might not be part of something rising from Athelney Pass.

3.5km. later we reach the end of the logging road and drop steeply to meet the unnamed tributary, which is deep, fast, and, in our judgment, impassable. We turn and begin to gain elevation, paralleling the creek's north bank. We quickly realize why the route doesn't appear in any guidebooks: the hillside is strewn with ponderosa pine blowdown, stacked hither and thither like pick-up sticks, in some places forming five or six foot high stockade walls. As the light fades out of the day we chin ourselves up, over and down this blowdown. Ponderosa bark peels off when you step on it, causing you and your forty-pound multi-day pack to go flailing off the log you're balanced on, and to maybe land on the ground...or, more likely, on top of another log, whose bark also peels, pitching you in a third, totally unanticipated direction...

"JING CREEK, drainin' the JING GLACIER, on the way to JING PASS."

The terrain gets steeper. The creek turns into an admittedly impressive series of huge cascades through a box canyon. Occasionally we run into flagging, laid out in such a manner as to suggest orange tape glued onto the backs of several hundred snafflehounds turned loose to make their own way up the hillside. The blowdown doesn't relent. Two and a half hours to travel less than a kilometer! Finally, just as it gets dark and the moon comes up, our heroes locate a sandy ledge big enough for their tent and turn in for the night.

"I'm not comin' back down through that. NO WAY."

In the morning it's overcast. Our heroes dismantle the tent and plod up what by now is a steep sandy ridge high above the creek. The blowdown dials back a bit, and the flagging improves. In places a weatherbeaten "route," part game trail, part ancient footprints, is visible. The "route" turns southwest, following the creek's upper canyon toward Athelney Pass. Now the sky darkens. Up ahead are impressive views of a series of glaciated towers on the northern end of the pass...until curtains of rain descend, cutting them off from view. (Foreshadowing!) Also up ahead is another bluff-and-forest headwall. The "route" passes through some flat alpine hemlock studded benchland, descends to a gravel bar on the side of the creek, and fades out entirely in marsh and thick riparian greenery. It starts to rain, lightly at first, then gradually picking up steam. Our heroes pitch the tent, climb in, and spend the rest of the cool rainy afternoon napping and watching the water level in the creek rise impressively over the course of a few hours. Lipton pasta-and-sauce fortified with butter, perks their spirits up considerably, and they drift off to sleep listening to the patter of rain on the tent fly.

Wednesday is cloudy but promises improvement. But our heroes, one of whom just spent six days climbing the Golden Hinde [highest mountain on Vancouver Island] with a fifty pound pack, and the other, who is also in reasonable shape, are too stiff and sore to move far from the tent, yet alone contemplate thrashing further up the drainage. So, after breakfast, the tent is dismantled and the party retreats down the creek. The "canyon route" goes quickly, but the steep descent down to the logging road takes even longer than the ascent, with the usual headlong spills off blowdown thrown in for shits 'n giggles.

The 3.5km. walk out to the car in broiling heat is no fun, either, save for the wild raspberries flourishing along the road and a quick detour down to the banks of McParlon Creek to rehydrate and soak off some of the accumulated dirt, sweat and grime.

1. The federal 1:50,000 map sheet (J14) is full of lies and entirely omits significant micro-terrain. Also, despite being purchased at the Co-Op, it appears to have been printed by an inkjet printer on toilet-grade paper. My office HP deskjet produces a better product.

2. BC Basemap at 1:10,000 resolution is surprisingly accurate, but hard to print out.

3. Dried pineapple, bought in bulk from Save-on-Foods in Squampton, turns out to be a tasty wilderness snack.

5. This was the hardest off-trail travel Keefer and I have ever done in our lives. Don't underestimate blowdown; we would both travel a LONG way to avoid it in the future.

5a. Don't take a 2WD car you care about up the Bridge River FSR.

6. My legs are purple and yellow this morning, and I'm having lots of trouble doing things like tying my shoes and standing up. Nonetheless, lots of JINGTASTIC fun was had by all!

Woody Herman and Herbie Mann Cover Steely Dan -- just to keep you company while I'm gone. Music to struggle through devil's club to! 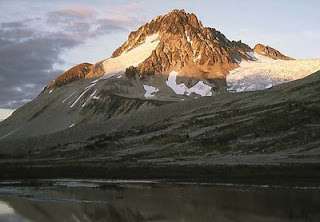 CJB and Team Cat are in the Coast Range and offline until Thursday. Pictured above: this week's destination, Mount Ethelweard, which involves a 5 hour drive and 8+ hours of bushwhacking to approach, a glacier crossing, and extensive rock scrambling. First summited in 1972 by kindred spirit John Clarke. No roped climbing, but seldom ascended for obvious reasons. 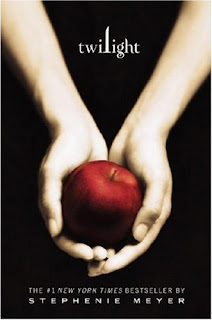 WH: It's by Stephanie Meyer! 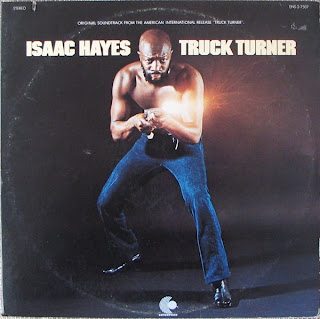 Farewell soul legend Isaac Hayes, his slow scorching interpretation (on Hot Buttered Soul) of Bacharach and David's Walk On By still a favorite after all these years. 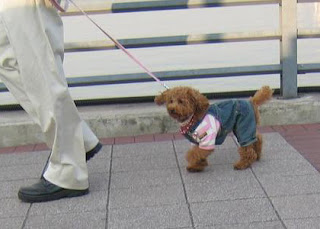 PULPFICTION STAFF MEMBER JAMES N. [of William Wegman, Man's Best Friend]: What the fuck is up with that guy?

CJB: He's providing a valuable service. [Opens book, kindergarten-storytime style]. Where else are you going to find a photograph of a dog wearing pants?