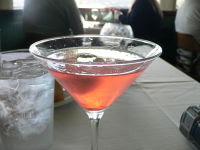 Q: What caused the hangover in the first place?

Q: Don't you ever learn? 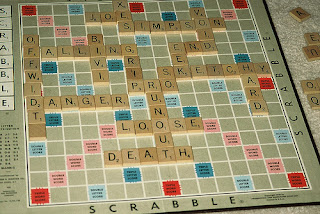 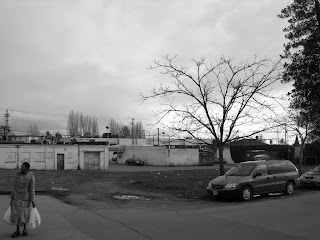 First "cinematographic" photograph. A collaboration with a loosely directed performer. One of my regular haunts visible above that corrugated roll-up door. After the light faded I walked over and scored a backpack of books for the store, including a seriously mispriced hardcover from a long-OP UK psychoanalysis series. Degas' Little Dancer Aged Fourteen (1878-81) somewhere in the back of my mind, too, and promptly registered by S., who saw it with me in the Norton Simon Museum four or five years ago.
- posted by cjb @ 8:48 AM
Thursday, March 01, 2007 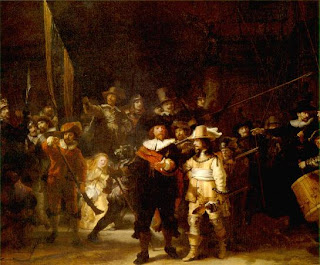 The artist knew their faces well
The husbands of his lady friends
His creditors and councillors
In armour bright, the merchant men
Official moments of the guild
In poses keen from bygone days
The city fathers frozen there
Upon the canvas dark with age....
- posted by cjb @ 10:40 PM

And for those readers who care, Warren Buffett's new annual letter to Berkshire Hathaway shareholders is now online.

Someone wrote yesterday soliciting my opinion of the S&P's recent drop. I didn't reply at the time, but today, just for interest's sake, I sampled the current P/E ratios of a few major US companies that I have some kind of casual intellectual interest in. This is by no means a list of recommendations or stock picks; I don't own any of these companies and don't plan to any time soon:

The P/E ratio represents the price you have to pay to get your hands on $1 of the business' current earnings. And even at these "recently corrected" prices, I'll pass. I wouldn't be at all surprised if North American markets tank this year. That said, I am perfectly content with Anodyne Inc.'s holdings, and am planning no major portfolio changes in the forseeable future. 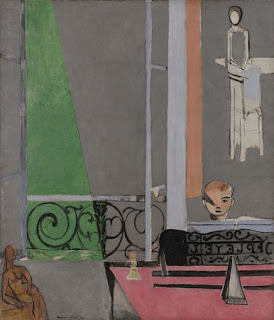 An inrush of arctic air. Crystalline sky, an almost-full moon riding whitely above the mall. Huge purple lenticular clouds, lit from below by the descending sun, like James Blish's huge city-machines, ready to torch up the gravity well and quit the scene:

"What'd you see down there?"

Cars with their headlights on. A honking chorus as a trolley bus executes a slow clattering turn against traffic.

Too cold for photography; I stood on 16th Avenue near twilight, shivering, bare hands red with chill. The iron tang of snow in the air. Words stripped away by the cold. Owen came for lunch; we sat in the bakery just around the corner, observing the sandy March sunlight out on the sidewalk. Recently returned from NYC, Owen described working, for a week, in the same high-walled, light-drenched room as Matisse's The Piano Lesson (1916, above). I don't have the skill to adequately describe this painting: what can you say, really, faced by that green slice at upper left, or the similarly-shaped wedge that scars the young boy's face? Passages of "abstraction" that refuse any definitive phenomenal identification; the compression of a host of feelings into shapes that refuse to be sorted back out into their component parts: into light, into exterior foliage, into floor, into skin. I find myself at a loss for words. Oh, yeah, uh-huh, I dunno...."I was out with the Nikon yesterday." As if this statement could somehow encompass a wider spectrum of emotions, or all the things I saw. A tray of apples red with sunlight through a window. Cloud-shadow on car hoods. A tall African woman in a long quilted jacket, her hands hooked through two heavy white plastic shopping bags. And the soft grey fuzz on the magnolia buds by the hospital.
- posted by cjb @ 6:12 PM 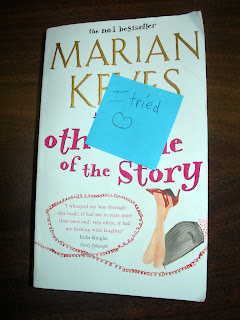 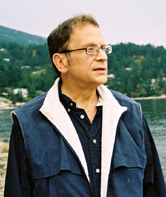 My favorite Maillard to date, the fourth part of a bildungsroman variously set in West Virginia, Boston, and (for a page or two) Toronto's Pearson International Airport. Maillard's books used to perpetually occupy the remainder tables down at Duthie's and Book Warehouse. I came, early on, to the book-collector's snobby and ignorant conclusion that anyone remaindered so often couldn't possibly be any good. Then I met a couple of Maillard's former creative writing students from UBC, including one with particularly acute critical taste, who described his Gloria as one of the best books she'd ever read. A few months later, a US trade paperback of Gloria showed up, unexpectedly, on a new supplier's remainder list, and I tagged a single copy onto the order. A very strange book, a sprawling "literary" novel written in a style not much in evidence these days, a 1950s social potboiler plot full of sex and emotional disintegration written in a mercilessly clear just-the-facts-ma'am style that immediately put me in mind of older American authors like John Cheever, Philip K. Dick, and Don Robertson: "literary" writers who deliberately chose to "refunction" popular genre models. There are set pieces in Gloria I don't ever expect to forget, including a memorable climax in which the relentlessly spunky and resourceful twentysomething protagonist hammers a volley of arrows into a sexual predator's sports car.

The Difficulty at the Beginning quartet is Maillard's extension -- and, in many cases, wholesale rewriting -- of two of his earliest books, The Knife in My Hands (1981) and Cutting Through (1982). Each of the quartet's novels is written in a noticably different style, and the tone of the sequence as a whole darkens as it focuses on the social and psychological disintegration of the late-60s American left. Maillard's blackly comic evocation of doper's paranoia easily withstands comparison with novels like Robert Stone's A Hall of Mirrors, Denis Johnson's Jesus' Son, and Philip K. Dick's A Scanner Darkly. And two of the novel's characters -- Pam Zallman -- anorexic; rogue cultural theorist; ex-ballerina -- and Tom Parker -- Vietnam vet; dealer; ostensibly "crazy," yet capable of clear, sustained and accurate reflection on his far worse off countercultural comrades -- are drawn with a compassion and psychological depth that has much more in common with nineteenth century literary realism (with Dickens; with Balzac; with Tolstoy) than with the present moment's relentless focus on style, or ironic pastiches and mash-ups thereof.

Very few people will probably read Looking Good; it's a thick and densely written novel from a hole-in-the-wall Canadian publisher which more or less requires reading the first three (and to my mind, somewhat less good) books in the quartet -- 600+ pages!-- as a set-up. But it's a major work of literary realism that held my attention for two weeks solid and deserves your close attention.

New Sy Hersh in this week's New Yorker, along with a thorough, fair-minded Peter Schjeldahl review of the Jeff Wall shows currently up at NY MOMA and Marian Goodman:

Hersh: "'We are not planning for a war with Iran,' Robert Gates, the new Defense Secretary, announced on February 2nd, and yet the atmosphere of confrontation has deepened. According to current and former American intelligence and military officials, secret operations in Lebanon have been accompanied by clandestine operations targeting Iran. American military and special-operations teams have escalated their activities in Iran to gather intelligence and, according to a Pentagon consultant on terrorism and the former senior intelligence official, have also crossed the border in pursuit of Iranian operatives from Iraq."

Schjeldahl: "The prevailing style is realist, but it is regularly beset by mixed, toilsome aims: Wall has harbored enough motives to impel several artists, and they have tended to get in the way of one another. There is the righteous Wall, who lodges complaints on behalf of racial minorities and the poor: in Mimic (1982), a bearded lout makes an insulting gesture to an Asian man on a city street; An Eviction (1988, reworked in 2004) is an aerial view of a neighborhood in which a violent dispossession takes place. The erudite Wall imports art-historical and ideological arcana with motifs from Manet, Hokusai, or Walker Evans here and a redolence of German or French critical theory there; Guy Debord’s The Society of the Spectacle (1967), among other strenuous texts, influenced Wall’s adoption of commercial signage techniques, in a spirit of criticizing mass culture. Wall the director deploys Brechtian alienation effects, to a fault, in his use of models and actors: in The Goat (1989), the stilted postures of four boys bullying a fifth quash any possible drama. Finally, there is Wall the lurking suitor of beauty in landscape, cityscape, interior, and still-life. He’s my favorite, and, lately, the most prominent. The retrospective and a concurrent show of notably strong new pictures at the Marian Goodman gallery give a strange impression of development in reverse: an artist doing his relatively uncomplicated early work last."
- posted by cjb @ 9:30 PM

Not much love for Montreal's Chris Hand, proprietor of a small, self-funded gallery, art blogger, and self-styled visual arts gadfly, whose appetite for controversy is still way out in front of his ability to read and think. Last Saturday, Mr. Hand apparently read the same NYT Magazine article on Jeff Wall that I did, and took a break from feuding with the rest of Canada to cobble together a rambling diatribe about how "Mr. Wall seems to embody absolutely everything I find atrocious in the contemporary art world," along with a laundry list of quotes attributed to Wall. Unfortunately for Hand, the last quote he chose wasn't uttered by Wall, but by October editor Benjamin H.D. Buchloh, who can't be remotely characterized as a supporter of Wall's work. Whoops!

Monday evening. Light slowly fading from cold winter sky, wind snapping at the lamppost banners and the ornamental cherry tree outside the door, its buds clenched tight against the week's forecast of arctic chill, snow, sleet, and three days of steady rain.

Someone writes to ask where the photographs have gone. The Nikon's terrible in low light; it's parked at home, waiting for days that consist of something more than showers spitting from the steel-grey firmament. Someone else writes to ask after my emotional stability. Pretty good, everything considered; life lately is organized by work's rhythms, by the business hours posted on the door (SUBJECT TO MINOR VARIATION), by appointments with vendors and fellow dealers, by the return time stamped on the rental van contract. I'm buying a Pentax 645, my first medium format film camera, in order to make some "cinematographic" (posed; "directed"; possibly even digitally recomposed) pictures that have been nagging at me for a while. Lots of futzing around in the evenings, combing through Big Electronic Garage Sale's camera listings, which is its own form of meditation. And, in between, lots of grunt labor: unscrewing shelves; carrying bookcases down the block at 3am in pouring rain; talking to the amused firemen who arrived to investigate the illegally parked van and the load of lumber dropped on the sidewalk opposite the condo complex full of touchy noise-sensitive yuppies. A life dense with rapid shifts from "economics" to "aesthetics" and back again. So, if you ever had to wait for the gallery keys while I combed through sixteen boxes of Robotech pocketbooks, or if your purchase of The Secret Life of Bees was interrupted by me discoursing with a friend on conceptual art's impact on the depictive arts, this post is for you.
- posted by cjb @ 5:57 PM

CJB: Half of them. Fagen's latest album.

SBV: High school. I thought I was so sophisticated! I can't imagine listening to that guy now.

SBV: So! Anything here you can use?

Spring on Main Street: through rain-showers, through rifted black clouds, direct sunlight, the year's first, striking through the gap between the Lee Building and Architectural Antiques, through my big front windows, and full across my face. Five and a half minutes of Vitamin D, edging ace book scout Steve Jones' hair with light, forcing me to squint at him through the glare.
- posted by cjb @ 4:41 PM 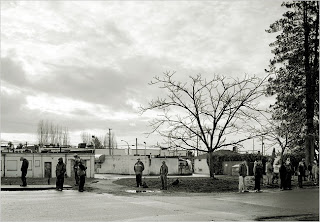 "'My love of depiction is just affectionate,' he told me. 'I’m a more affectionate person than I thought I was. I like trees or I like people’s faces. That’s one reason I think my work has changed. I realized I wasn’t interested in filtering my affection for things through certain levels of mediation.'"