Someone writes to ask why the ghosts' numbering keeps running inexplicably backwards.

A few ghosts have been ejected from the series for seeming insufficiently ghostly. The out-of-sequence pictures are their "stunt doubles." Others (notably #21) have been repeatedly photographed under varying conditions until they evaporated under the pressure of all the attention. 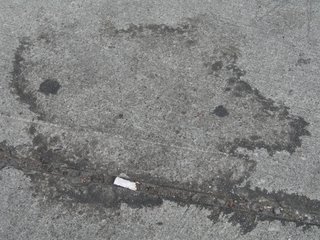 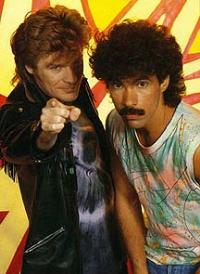 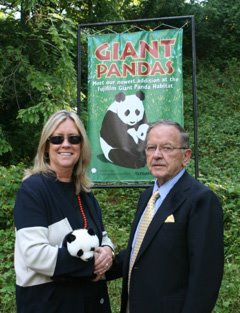 "There's one company now you can sign up and you can get a movie delivered to your house daily by delivery service. Okay. And currently it comes to your house, it gets put in the mail box when you get home and you change your order but you pay for that, right.

But this service isn't going to go through the interent and what you do is you just go to a place on the internet and you order your movie and guess what you can order ten of them delivered to you and the delivery charge is free.

Ten of them streaming across that internet and what happens to your own personal internet?

I just the other day got, an internet was sent by my staff at 10 o'clock in the morning on Friday and I just got it yesterday. Why?

Because it got tangled up with all these things going on the internet commercially.

So you want to talk about the consumer? Let's talk about you and me. We use this internet to communicate and we aren't using it for commercial purposes.

We aren't earning anything by going on that internet. Now I'm not saying you have to or you want to discriminate against those people [...]

The regulatory approach is wrong. Your approach is regulatory in the sense that it says 'No one can charge anyone for massively invading this world of the internet.' No, I'm not finished. I want people to understand my position, I'm not going to take a lot of time. [?]

They want to deliver vast amounts of information over the internet. And again, the internet is not something you just dump something on. It's not a truck.

"When he is discussing issues that are especially important to him (such as opening up the Arctic National Wildlife Refuge to oil drilling), he wears a necktie with The Incredible Hulk on it to show his seriousness. Marvel Comics responded by sending him free Hulk paraphernalia and throwing a Hulk party for the Senator.

Stevens is the focus of the Ted Stevens Foundation, a charity established to 'assist in educating and informing the public about the career of Senator Ted Stevens.' Tim McKeever, who is chairman of the Foundation and is a lobbyist who was treasurer of Stevens’s 2004 campaign, has said that the charity is 'nonpartisan and nonpolitical.'"
- posted by cjb @ 12:44 PM 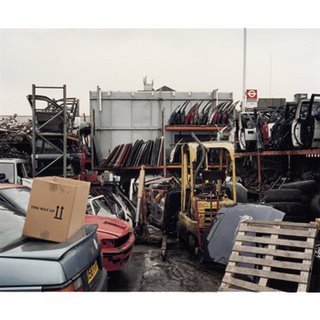 This serial spirit -- rampantly curious; egalitarian; largely made by wandering around - is something genuinely new in photography. Lots of recent projects seem animated by a similar impulse: SGB's Every Bus Stop in Surrey, B.C.; Adam Harrison's 365 Sketches; Jamie Tolagson's 100 Views; Robert Linsley's 100 Views of Mount Baker; my ghosts. These pictures are all encyclopedic descriptions of a particular culture or place, and they all cast as wide a net as possible, in the hope of snaring representations of things that haven't made it into more idea-driven picture-making. Gill's series "Invisible," and "Billboards" are my favorites of those profiled on his site, with"Lost" bringing up third place. Also note Gill's generous offers of free limited edition pictures; this too is an impulse derived from conceptualism. Gill might as well have stamped his free bank machine photographs COLLECTION PUBLIC FREEHOLD.

Iain Sinclair, from a review on Gill's site: "Gill is not a polemicist. He is present, as Robert Frank is present in his American wanderings, to let reality imprint itself with the smallest degree of intervention or commentary."
- posted by cjb @ 11:07 AM 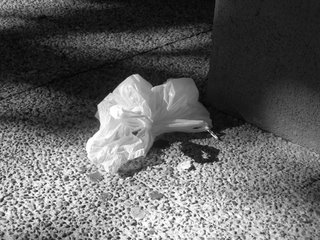 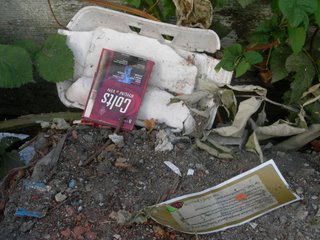 In pitch dark
I go walking in your landscape...

A possible soundtrack for all those cluttered black and whites a few months back.