"There's really no comparison between the two. Firefox is relatively safe, extensible, and quickly patched. Internet Explorer is unsafe, slowly patched, has stupid overtrusting defaults, and is essentially just a security hole that lets you go to websites."

25% off red tag sale this weekend at Book Warehouse, Vancouver's self-proclaimed "favorite independent bookstore chain," home of numerous Oprah favorites and the entire CBC Canada Reads list. Lots of interesting stuff mixed in with the middle-of-the-road backlist, including, to my delight, Past Things and Present: Jasper Johns Since 1983 (Walker Art Center, 2003), an expensive hardcover catalog I put off buying new, reasoning that it would arrive over the transom used sooner rather than later. But hardly anyone ordered it in Vancouver, and used copies were conspicuous by their absence. Not what I expected to ever pull out of BW's tiny North Vancouver location, but a pleasant surprise nonetheless, and a good long walk at twilight back down Lonsdale to the Seabus, cool wind blowing, thunderheads piled up over Georgia Straight, unexpectedly pleasant art-historical conversation on the ride across the harbor back to town.
- posted by cjb @ 10:25 PM 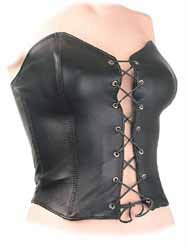 Au revoir Mack's Leathers, Inc., closing out on Granville Mall, outfitters of many of my leather and PVC-loving pals, members of -- in Pulpfiction record guy extraordinaire John Tweed's words -- "the shiny pants club." Sayanora too to the geek-hooded and flogger-toting mannequins in Mack's big barred display windows. There's something heartwarming about the sight of a not even remotely anatomically correct life size white plastic mannequin with a genital piercing.
- posted by cjb @ 10:11 PM 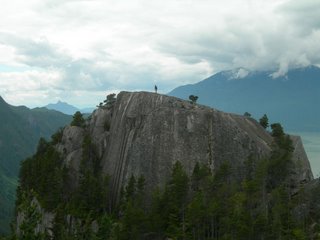 "Desolation in solitude." South (First) Peak, Stawamus Chief Mountain, looking southwest from Second Peak slabs, glacial green Howe Sound in the distance. Leading Peak on Anvil Island is just visible at the far left below those remnants of blue sky. An overcast and spectacularly muggy day, but it was great to get out scrambling on the Chief's steep granite slabs. And Dorothy's organic bison sausage sandwiches were delicious.
- posted by cjb @ 9:37 AM
Thursday, June 15, 2006

"Bechdel literally acts out each scene that she draws, complete with props and costumes, posing as each person in a frame and capturing it all in photographs. In a video clip available on her website she describes this routine from the studio of her Bolton, Vt., home of ten years as her cat ambles in one corner of the frame. 'It indicates a weakness in my drawing technique,' she now says. “I can't make stuff up in writing or in drawing; I can only reproduce it.' While Bechdel uses this method with Dykes to Watch Out For, it has a different impact when the subjects are her own family members, including herself. 'With my family it has this weird other role, like I'm reliving my past, moment by moment.'

For Fun Home Bechdel found herself reenacting difficult scenes in her life and 'marinating in it.' A few years ago she actually visited the stretch of highway where her father was hit by a truck and took photographs of trucks rushing at her down the road. She describes the creative fodder she relied on for Fun Home as the 'detritus' of her childhood: drawings that go back to her seventh year, journals she began at age 10, an income/expense log she has kept since she was 13. She also dredged up maps of her hometown, grocery lists, sugar packets, and more ordinary mementos, such as photos, letters and ticket stubs. Her mother gave her a box of her father's letters, 'several hundred pages of his thinking.' Bechdel transcribed them all and incorporates fragments in her book."
- posted by cjb @ 9:16 AM 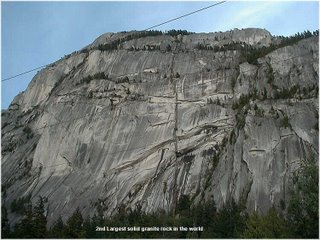 Q: Did you cry when you wrote that song?

DONALD FAGEN: No, but when I hear one of our less successfully realized songs on the radio, it's easy to trace the tracks of my tears.
- posted by cjb @ 11:03 PM 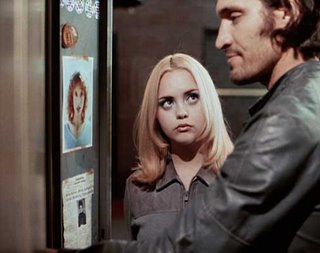 "Now I'm in Buffalo NY at the Holiday Inn waiting for my train. Chris, you know that movie Buffalo 66 (Vincent Gallo) ? That movie is no joke, it sucks here, and the air smells funny."
- posted by cjb @ 9:34 AM 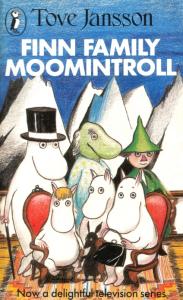 "Guess what I did last Saturday?

We were in Helsinki for a week (I was attending a live operative microneurosurgery course which was *really* good). . . .So on Saturday we got up early, took the train to Turku and the bus out to Naantali, and went to Moominland.

It's nice, actually. I was a bit dubious about the whole themepark thing, but I trusted the Finns not to mess it up too badly. The park is on a small island, and it's still all mostly rocks and trees and lichen and moss and beaches - just with little boardwalks and the Moominhouse and a maze and a boat and a beached submarine and various activities scattered through the forest. There's also Theatre Emma - we watched two short (15 min) productions there - one was singing and dancing, the other was the story of the Hemulen and the Hattifatteners, in Finnish (or we had an option on Swedish, an hour later). Since [son] Galen knew the story anyway, it didn't matter too much that we couldn't follow the dialogue.

Much fun. The best time was on the very small beach, though. Still a bit cold for swimming, but there was sand to dig and reeds to dig with, stones to throw out to sea, and sunny rocks to lie on. And we had 'big yellow pancakes with raspberry jam' in the cafe."
- posted by cjb @ 9:26 AM 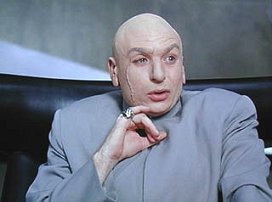 (Ostensibly conclusive proof of my sketchy musical taste. But perservere (or fast-forward, depending on your tolerance level for slow-mo fog machines, lasers, & endless distorted 80s guitar) exactly 1m 10 sec into the "performance." Priceless!)
- posted by cjb @ 9:06 AM
Monday, June 12, 2006 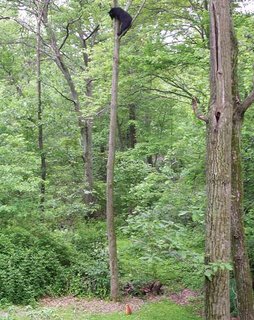 "Look at that picture above. That's Jack the cat protecting his owners' yard in West Milford, New Jersey from a visiting black bear. When the bear first came into the yard Jack went after him and scared him up a tree. After fifteen minutes the bear finally got the balls to come back down, only to be chased up another tree minutes later. Finally, worried for the safety of their 15-pound-pussy Jack's owners called him back into the house and the bear went away."
- posted by cjb @ 8:25 PM

Ask Me
By William Stafford -- another birthday poem!

Some time when the river is ice ask me
mistakes I have made. Ask me whether
what I have done is my life. Others
have come in their slow way into
my thought, and some have tried to help
or to hurt: ask me what difference
their strongest love or hate has made.

I will listen to what you say.
You and I can turn and look
at the silent river and wait. We know
the current is there, hidden; and there
are comings and goings from miles away
that hold the stillness exactly before us.
What the river says, that is what I say.
- posted by cjb @ 12:46 PM 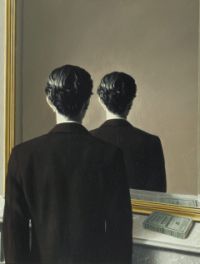 Who the hell is Ryan Aronofsky?
Did you have a show and not tell me?
"Granville Street Studio?" I went there yesterday and there's just a boarded-up storefront. WTF?!!!

I spent Friday night looking through several discs of pictures, and wasn't too impressed with what I found. I started making a list of "defects," but had a lot of trouble doing it in note form, and switched to a narrative voice. I tried to think dialectically, drawing out every major flaw or shortcoming I could, to externalize them.

Ryan writes for Woo and Fillip. He gets around to openings: Blim, Blanket, the Western Front. If he's not yet in the Curatorial Studies program at UBC, he should be. His lineage is jumbled: Pale Fire's Charles Kinbote; Dale Cooper's "Bob"; Magritte's doppelganger (above); Rodney Graham's 007. We met, once, across the Pulpfiction buying counter when he tried to peddle a bunch of highlighted October back issues and a water-damaged Thousand Plateaus. Now we meet every morning, when I shave.
- posted by cjb @ 9:30 AM 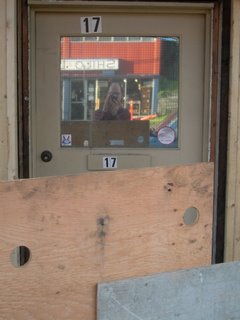 I'm 36 today, hard as that is to believe. Pulpfiction is 6 as of 11am. Originally I had not thought to open on my birthday, but the shelves were built and the books were on the shelves and my two weeks of free rent were rapidly eroding, so I propped open the front door, put out the signboard, and made approximately $80 in eight hours, much of that from the already established used bookseller down the block, who dropped by late in the day, attempted to remove everything good and/or underpriced on a dealer discount, and then indulged in a little trash-talk. "You'll never last," he informed me, having firmly secured the H.P. Lovecraft section under one arm. "We'll see," I replied, still struck by the novelty of twenties in the cash box.

"...One afternoon each year
is yours. It stands again
across a certain field and is the same --
a day no year can hold, but always
warm, paused in the light, looking
back and forward, where everything counts..."
- posted by cjb @ 9:12 AM
Sunday, June 11, 2006 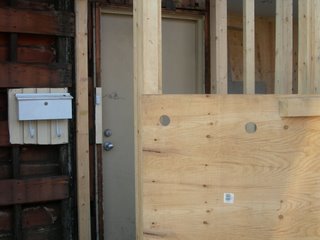 Chris the bookscout spins a tale:

"I'm talking to this dealer, he's got to hire a part-time clerk, and he says, 'I'm just so tired of them answering, "Lifelong love of books," to, "Why do you want to work in a bookshop?", that I'm almost ready to hire anyone who answers differently. What answer would you give, Chris?' 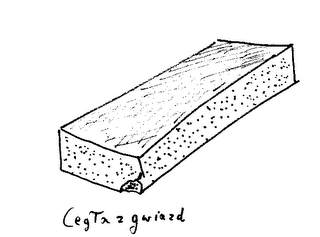 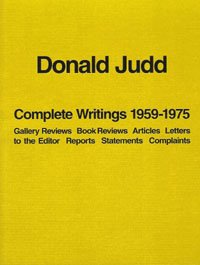 Stuart Gilden [Artzt; Oct. 3- 13] uses established abstract techniques to convey little; his vocabulary exceeds his knowledge of its meaning. All of the paintings are slashed and excoriated, for the most part without vigor or even brutality."

The Honorable Member for the Opposition 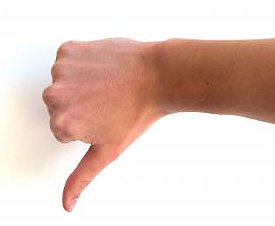 Christopher Brayshaw’s biography says he is an art critic, a curator, the co-director of a hip new Main Street gallery, a bookstore owner, and some other things I didn’t bother writing down. He’s also an amateur photographer. Judging by this show, his first, photography is a hobby he practices in and around his other jobs. As a result, none of the pictures on display are particularly strong or memorable.

It’s not that Brayshaw hasn’t thought about what he’s doing, but rather that he’s thought too much. The photos suffer for all this thinking. Some are of abstract shapes – a paint spill on the pavement; a boarded-over window; newspaper boxes – that suggest unearthly or supernatural presences. Brayshaw calls them ‘ghosts.’ Most do look like ghosts, but they also look like the work of local photographers Brayshaw admires and has written about – Jeff Wall, Roy Arden, Adam Harrison, and, in the case of the ‘ghost pictures,’ Evan Lee, for whom Brayshaw recently wrote a long and not particularly memorable essay for a Presentation House Gallery catalog. You expect this kind of lazy emulation-pastiche from entries in the grad show, and not from an ‘independent critic’ who is at least theoretically meant to be able to distinguish between okay and better art.

Besides the ‘ghost pictures,’ there are also some urban landscapes that name-check Walker Evans and Stephen Shore, and a few inexplicably cluttered studies of magnolia trees. These crowded photos seem like attempts to put a whole bunch of ideas (about landscape; about portraiture; about snapshot photography) into play simultaneously, but ultimately fail to resolve any of them.

Most of the pictures aren’t technically embarrassing (with the exception of the magnolias, the photos are competently composed, well-printed, and expensively framed). But it’s Brayshaw’s slavish imitation of the kind of photography he likes that renders his own work of only passing interest."
- posted by cjb @ 10:45 AM