"The thing that all those beautiful, scary, civilized women had in common, even the ones who spent less than a morning in his life, was that they were waiting for him to understand."
- posted by cjb @ 12:12 PM
Friday, June 02, 2006 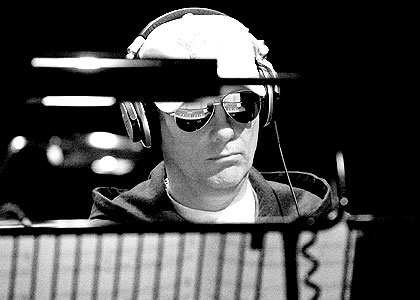 "Sometime in the late 1970s, rock music officially reached adulthood. The fans who grew up on rock as a wild, youthful counter-culture were getting older; they had careers, kids, fancy stereo equipment, and whole new sets of concerns. The same went for the stars themselves: Suddenly it was natural for them to look like adults, wear tapered suits, and act like they probably knew a lot about wine and real estate. Think of Rod Stewart, Dire Straits, Mick Jagger at Studio 54, and all those California guys who grew beards and indulged in self-employed guitar-strumming on self-owned houseboats. The British dreamed of an adult high life and the Americans dreamed of white-collar vacations, and they began to make music about those dreams.By the time Pet Shop Boys came along, pop was fairly adult, and they certainly sold adult-like pop: reserved and witty, even arch. Funny thing about them, though: They're one of the first acts I can think of to have navigated their own career-long growing-up with a form of electronic music. It's been fascinating to watch an act like this become elder statesmen of the British charts, and to bend synthesized dance-pop around the kind of music elder statesmen make-- music that's more careful, eloquent, and subtle, music that's wiser and less demonstrative. Rock guys, after all, usually turn to acoustic guitars and 'roots' to pull this off, and plenty of non-rock acts (hello, Madonna) can never quite do it gracefully. But Pet Shop Boys have the qualities to make it possible: Pop music that always came from clever heads, a style that was always a bit distanced, and a sound-- Neil Tennant's clear, airy voice; Chris Lowe's lovable building-block electronics. . . ."

Someone else, a fairly regular correspondent, writes to suggest, viz. this week's YouTube links, that my musical taste, or what passes for it, has self-destructed. "Donald Fagen...the Bee Gees...Michael McDonald...now this." To which the only possible reply is that when you live in a state of near-permanent pessimism and deep depression about the significance of everything that comes out of your head, pop music is more often than not an anodyne, a cure for pain.

Another, slightly more complicated answer is that at the time Neil Tennant met Chris Lowe, he (Tennant) was working both as a pop music critic and as a comic book writer/editor for Marvel UK. And I've always been a big fan of professionalizing one's interests.

(1.5 hour interview & BBC live concert here, including superb outtkes of Dreaming of the Queen and You Only Tell Me You Love Me When You're Drunk (requires intrusive Realplayer plug-in)) 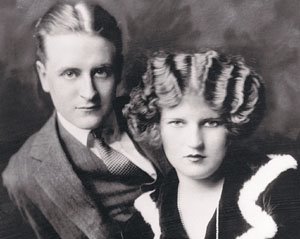 Finally, a live version of the most sublime (& intensely melancholy) pop song I know. 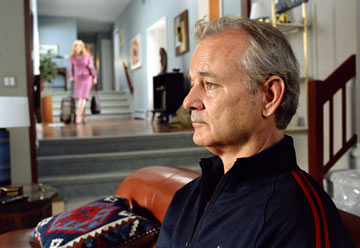 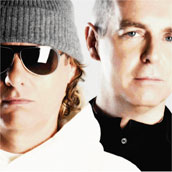 I've got my friends in the world,
I had my friends
When we were boys and girls
And the secrets came unfurled.... 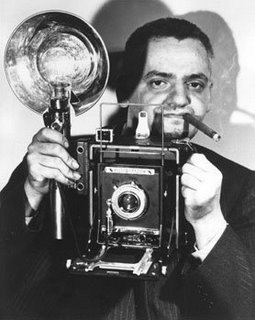 Vancouver-based critic Clint Burnham and I will be speaking at SFU this Saturday, June 3rd, as part of a panel discussion on photojournalist-cum-impresario Weegee. My "paper" (eg., sheet of handwritten notes) is tenatively titled, "Trouble is My Business," and considers Weegee in relation to the American/European schism in "detecting" first identified by Raymond Chandler in his short essay, "The Simple Art of Murder."
- posted by cjb @ 9:54 PM 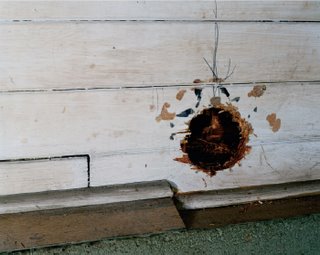 Vancouver-based readers should make a point of dropping into Monte Clark Gallery on Granville Street in the next week or two and asking to see the works "unofficially installed in the rear exhibition space," my favorite of which, Pipe Opening, 2002, is depicted above. I spent forty-five minutes back there today, and emerged feeling much more optimistic about art than I have in a long time.
- posted by cjb @ 9:40 PM 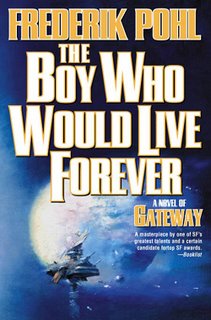 The Pohl is a Gateway novel, his first in sixteen years, a kind of potpourri, stirring various unresolved plot elements together. The book doesn't flow particularly well -- it's more a collection of thematically linked short pieces, a la 1990's The Gateway Trip -- but there are some strong sequences, including a piched Iain Banks/Alistair Reynolds-style space battle fought by machine intelligences, and an account of building a huge space telescope, just in order to watch a supernova eat an inhabited planet.

The McEwen's plot ticks steadily like clockwork, but its jumps between the various characters' points of view work well, as do the plot points concealed in the fake "documents" inserted into the text's body.
- posted by cjb @ 9:26 PM 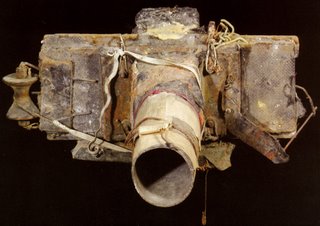 "Tichý is truly one of the great ‘finds’ of an unknown artists who worked on the outside edges of the art world. Following the communist takeover Tichý spent some eight years in prison camps and jails for no particular reason other than he was ‘different’ and was considered subversive. Upon his release in the early 70’s, Tichý wandered his small town in rags, pursuing his obsession as an artist with the female form by photographing in the streets, shops and parks with cameras he made from tin cans, childrens spectacle lenses and other junk he found on the street. He would return home each day to make prints on equally primitive equipment, making only one print from the negatives he selected.

He stole intimate glimpses of his subjects through windows and the fences of swimming pools as well as in the streets, sometimes finding himself in trouble with the police. He would often draw intricately on each print in pencil embellishing the images with his lines or reworking them in other ways, Tichý would also sometimes include a card frame around the prints and decorate those too.

The work which might to the casual viewer, simply appear to be intrusive voyeurism, takes on a melancholic and poetic quality. They are exquisitely produced small objects of obsession, which have no equal."
- posted by cjb @ 11:25 AM 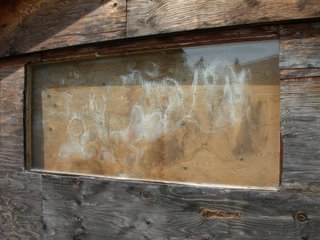 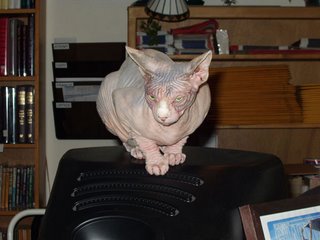 I have noticed there is ONE patch of rust on a panel by the front right tire and unfortunately I only have a tape player, however, there are NO mechanical problems that I know of.

The car was owned by a monastery (which only bought Subaru cars) before I bought it and they maintained the car with regular oil changes, etc. VERY often (I have the documents). There are many miles on the car, but since the car has been taken such good care of by running on synthetic oil and injected with gas cleaner for so many years, it is still running great.

As an indication of how well the car was taken care of I still have:

• 8 liters of synthetic oil
• 5 oil filters
• 3 bottles of Gasoline Additive
• 1 foam filter
• 2 bottles of silicone and metal lubricator
• extra spark plugs
. . .which I will throw in with the car."

So, off to Queen Elizabeth Park I went.

Car as described, except that the subtitles to "ONE patch of rust on a panel" were, "endemic lower body rust and strangely creaky CV joints." But the interior was nice and clean, and I appreciated the novelty of test-driving a Legacy previously owned by monks.
- posted by cjb @ 8:33 PM
Monday, May 29, 2006

It's What I Do

Directs and oversees all activities related to the operation of a bookstore. Responsibilities include purchasing new books, coordinating the sale of used books, hiring and evaluating employees, and ordering new inventory as needed. May require a bachelor's degree in area of specialty and at least 5 years of experience in the field or in a related area. Familiar with a variety of the field's concepts, practices, and procedures. Relies on experience and judgment to plan and accomplish goals. Performs a variety of tasks. Leads and directs the work of others. A wide degree of creativity and latitude is expected. Typically reports to top management."
- posted by cjb @ 11:00 PM 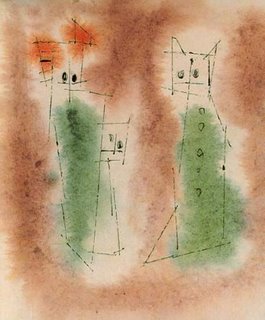 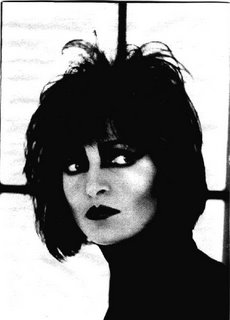 "To see a Goth girl in the act of twirling and prancing amongst heavy boots and black military gear can make your head spin, your eyes become swollen. To have a crush on her and get her phone number is even better."

says an irate binner, ejected, after

a) Trying to sell me a (trashed) copy of A Day in the Life of the Soviet Union, and,

b) Studying every book of nudes in the front room, page by page (25 minutes!). 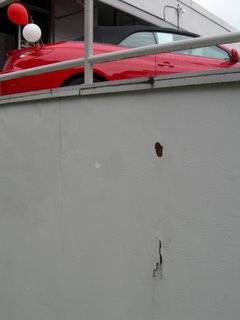