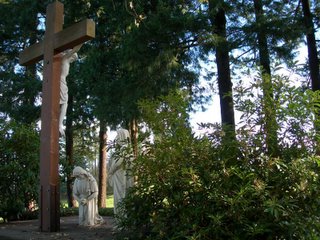 Chris the book scout recounts the incredibly lame tale behind the big NO REFUNDS sign at the Vancouver Public Library's last book sale. Two sales ago, Chris, along with the VPL's staff and every scout on the premises, was surprised to see a woman sweeping whole tables of books indiscriminately into her shopping cart, paying for them, boxing them up, and lugging them off the premises.

$core!, thought the VPL staff. Subterfuge!, thought the scouts. Turns out the scouts were right: Maniacal Book Buying Lady trucked all her purchases home, spent the night punching ISBNs into Amazon, then (wait for it)...

...returned all the worthless or common books the following day for a full cash refund. Awfully sorry, didn't realize what I was buying, & etc. 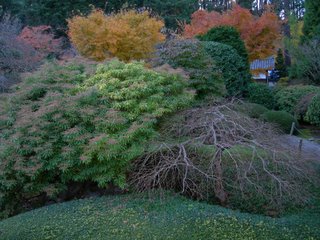 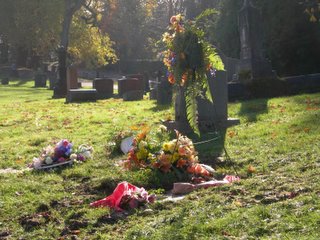 The first Enn Erisalu paintings I ever saw were his tall, thin rectangular canvases of the mid-1980s, which depict blocks and rectangles of solid color, propped or leaning against each other in shallowly modelled space. Recently I saw these works again, in the first of two Atelier Gallery memorial exhibitions, where they were displayed alongside more fully modelled studies of cones and cylinders, and fanciful Escheresque studies of blocks and cubes. The art historian in me can easily account for Erisalu’s paintings rationally, can connect, say, their muddy color and compositional clarity to Erisalu’s obvious admiration for and careful study of Morandi’s still life arrangements of blocks and bottles. But this dispassionate connect-the-dots style analysis misses something larger in Erisalu’s work. What is clear from Erisalu’s paintings is that he was so completely committed to his medium that he never allowed content to overwhelm or subsume the painterly means that produce representation. For Erisalu, a painting could never be accepted as “finished” or “successful” unless it laid bare the means of its own making, the tools and tricks of the painter’s trade that generate an illusion enabling us to see, in place of patches of carefully modulated pigment, “cubes” or “colored planes” or “monochrome paintings,” leaning carefully against each other as if in some dealer’s stock room.

Erisalu made monochromes, or near monochromes, since the mid-1980s, paintings of mostly or all one color, overlaid with texts and numerals. In the monochromes, the modelling and shading of paintings like Untitled (five forms), 1984 or Untitled #3 (1983) give way to the flat fact of the canvas’ surface, even as it is disrupted in turn by letters, numbers, and by the alternately witty and heartbreakingly cryptic phrases scattered through his notebooks. For the last month or so, I kept some of these books by my keyboard, and kept picking them up and leafing through them. I think this activity is a substitute for the conversations I never had with Erisalu. I naturally assumed he would be around for decades to come, available for a studio visit and a chat. Now there are only the notebooks – ample evidence of Erisalu’s sharp mind – and the paintings. They are “facts” around the larger fact of his absence, and if in writing about him now I seem to skim across, or hover restlessly above, his work, it is only because I have taken one of his better notebook phrases – “CAN’T EXPLAIN / DON’T EXPLAIN” – to heart. We owe the dead the obligation not to step in front of them, usurping their work by arbitrarily summarizing and categorizing, but to simply articulate the thoughts that their works prompt in us. In Erisalu’s case, this means asking fundamental questions about the practice of painting, and its relationship to modern culture.

Monochromy is by now a genre, an “available formal structure,” to quote the French art historian Denys Riout. It wasn’t always. In 1921, when Rodchenko exhibited his monochrome Triptych: Pure Red Color, Pure Yellow Color, Pure Blue Color, he explained himself thus: “I reduced painting to its logical conclusions. I affirmed: it's all over." Rodchenko imagined that he was ending painting for good, not prolonging it. Yet his innovations did prolong it, even as they, in turn, were picked up and transformed by artists such as Gerhard Richter, Joseph Marioni, Robert Ryman, On Kawara, and Marcia Hafif. One consequence of these ongoing innovations is that monochromy has become a genre, a set of conventions within the larger context of art-in-general. It thus runs the risk of any genre of art, namely, that works made “in accordance with” its conventions will only be compared among themselves, and will thus be isolated from more difficult, or rigorous, comparisons. Yet we intuitively sense that monochromy is a genre unlike others. Somehow the monochrome represents not only itself, but all of painting. If this is so, then painting can only move forward by working with, or transforming, the monochrome – by repeating it; by allegorizing it; or by disfiguring it with letters and numbers.

Early monochromes, like Rodchenko’s, possess a utopian dimension. The monochrome gestures toward a point at which art will be finished, unnecessary, “all over.” The creativity brought to bear in culturally privileged forms such as painting and sculpture will be dissolved into play, new kinds of social activities and political systems that will be more open or “free” than those of the present day.

Erisalu’s monochromes begin by inverting this utopianism; they begin by acknowledging disenchantment. Leafing through his notebooks, you repeatedly encounter phrases that ruthlessly undercut what the French philosopher Jean-Francois Lyotard calls the “metanarratives” of Western culture –religious or political orthodoxies of any kind. GOD BITES MAN. DON’T PAINT / DON’T EXPLAIN. IF GOD SAW LIFE AS PRECIOUS HE WOULD TAKE BETTER CARE OF IT. TOXIC IDEAS. And, finally, EVERYTHING I BELIEVE IS SUSPECT. EVERYTHING I BELIEVE COULD BE WRONG.

I admire Erisalu’s doubts, but I do not quite believe him. I think that in his best works – paintings like Aesthetics Agnostic (1994), or a series from the mid-90s all bearing the phrase, TROMPE L’OEIL, he found a middle ground that eschewed the radical utopianism of the early monochromists, while simultaneously avoiding the tongue-in-cheek cynicism characterizing much late 20th-century painting. I think this “third way” can be seen in specific physical aspects of his paintings, for example, the strangely neutral font in which almost all of Erisalu’s texts are written. His gallerist Ilana Aloni says “[He] made his own fonts, wanting them to look like a sign made by hand by a bureaucrat who needed to make a sign, and wrote it himself.” Two related ideas are contained in this decision. First, Erisalu’s identification is not with a culturally privileged maker of autonomous objects, but with a worker, someone whose work, though handmade, only functions within the context of a social, and not purely aesthetic, system. Second, painting is not the object of detached contemplation, but pure information, much like a billboard or a highway sign, an object that must be read to produce meaning.

This last point is important, more complex than it might first seem. There is always a conflict between images, which are perceived instantly, and texts, which will always be perceived more slowly. Language, unlike images, is temporal. We focus on each word in a phrase or sentence in turn, paying attention only first this one, then to that one. By holding the memory of one or more words together simultaneously in our imagination we effect a synthesis: linguistic meaning.

This dichotomy – the fundamental difference between words and images – fascinated Erisalu, and he explored it in different ways. Some of his paintings articulate concepts both visually and verbally; they are what they say; they are tautologies. Ten Letters (1991) really is composed of ten letters – three Es, three Ts, an L, an N, an R, and a S – though most viewers will probably not be able to recognize their significance without the title’s guiding hand. Similarly, a series of paintings from the early 2000s are titled after the pigments – Iron Red, Titanium White, Yellow Ochre, etc. – used to make their monochrome surfaces, pigments which are also displayed in their raw form, as powders installed in steel boxes beside the paintings. These strange half-sculptures, half-paintings generate a whole chain of verbal and visual signifiers: a base material, its visual depiction, and its abstraction into language. These pieces’ conceptual rigor puts me in mind of works such as Joseph Kosuth’s Five Words in Orange Neon (1965), or Ben Vautrier’s language paintings of the early 1960s, pieces like Rouge, or Blanc.
Associations like these aren’t a reach or a struggle; what is puzzling is that so few critics or historians in Vancouver – myself included – made them while Erisalu was alive and working.

Erisalu’s works did not conform to a regional context, a context which, with one or two exceptions, remains largely rooted in a romantic, nature-based abstraction. Erisalu’s work is more cosmopolitan and restrained than most Vancouver painting. Spend time with it, and you might experience some defamiliarizing, some questioning of your cherished assumptions.

Erisalu worked hard to defamiliarize his audiences. His notebooks bear witness to how he came time and again came to the act of painting without the benefit of conventional beliefs, without religious or political certainties, without, in his words, “TOXIC IDEAS.” To me, his paintings’ complex formal games – their mirrorings, their repetitions, tautologies and repeat attempts to trompe l’oeil are attempts to induce a precarious uncertainty in viewers, to make us question our most cherished assumptions about painting’s relationship to language, and to make us think dialectically, seeing words as images, and images as words. This purpose was not cheerful and by all accounts never easy, but it is one I respect and admire, and one I therefore can’t, and won’t, “explain.” 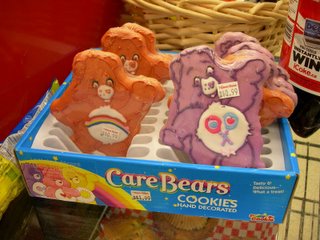 Karl Marx: "The medium through which estrangement progresses is itself a practical one. So through estranged labour man not only produces his relationship to the object and to the act of production as to alien and hostile powers; he also produces the relationship in which other men stand to his production and product, and the relationship in which he stands to these other men. Just as he creates his own production as a loss of reality, a punishment, and his own product as a loss, a product which does not belong to him, so he creates the domination of the non-producer over production and its product. Just as he estranges from himself his own activity, so he confers upon the stranger an activity which does not belong to him."
- posted by cjb @ 12:04 PM

I taught myself to read aged four or thereabouts. Lots of laughter about the ferociously intent little kid who'd spell and pronounce words in all kinds of weird ways. After a while, context worked its magic, and the spellings and mispronunciations disappeared.

Photography is a grammar, just like language. (I suppose photography is actually a subset of a larger grammar called "Western pictorial art," but I'll stick with photography for now). The Untitleds are proper nouns: people, places, things. You could call them designatory pictures; they signify by pointing, like an extended finger. This latte, those raindrops, that sky.
- posted by cjb @ 10:26 AM