Wayne White, The You Just Don't Get It and You Never Will Look (2004, acrylic on photolithograph)

High grey clouds and a little sun creeping through in the morning. Across Burrard Inlet on the Seabus, and by bus to Lynn Valley Mall (140m), then up Mountain Highway, which begins deceptively flatly from the 4-way intersection at the lights, then cranks up the incline (15%+) somewhere around Dempsey Road. Around the locked gate at the beginning of the old service road, and on up the Grouse Mountain Highway, a switchbacking dirt road that runs up Mount Fromme's southern slopes, contours into a pass between Fromme and Grouse, and finally scales Grouse's eastern flanks. Lots of Smithsonian erosion, the ditches full, and various sunken areas where last week's rains took out great chunks of roadbed, depositing them fifty or sixty feet away in lumpy, wood-and-gravel-conglomerate piles. Warm, more like May than January. Salmonberry bushes starting to push little bits of green bud out into the unseasonally moist air.

Water and nuts and a five minute break across from the gravel pit on the upper Grouse Mountain Highway. "I spy, with my shiny black eyes, something that looks like...money," says Rose T. Cat, glad to be sprung from the pack's top pocket. It's just a leaf, says jaded cjb. And then, reflecting: Damned if that leaf doesn't look like a soaking wet $5 bill half-in, half-out of the snow. Sho' nuff! In this way, Team Cat scores a free Skyride download.

Around the head of Mosquito Creek, floundering through knee-deep snow. Up the ploughed road on the Grouse Mountain side of the creek, under the chairlifts. That funny spinning noise the wheels in the towers make, like my Kitsilano grandma's clothesline singing in and out again.

The city spread out below.

Fog on the Fraser.

Across the muddy Cut, lots of Japanese snowboarders and skiiers in evidence on the patchy slope.

Up the BCMC trail to the lodge (1111m), past two totally unconcerned mule deer cropping at the grass along the Cut's western edge.

Coffee in the lodge, a bustle of activity after the silent green forest.

Skyride down at twilight, the light running out of the day above Capilano Lake. Dark shadows under the trees, their green boughs passing silently by under the gondola, almost but not quite close enough to touch.

Traffic on Nancy Greene Way with its lights on.

Yet Another Art Review -- text and sample images up at Straight.com
Garry Winogrand
Photographs from the portfolio "Women are better than men. Not only have they survived, they do prevail"
At the Monte Clark Gallery until February 6
Reviewed by Christopher Brayshaw

In Garry Winogrand's small black-and-white street photographs, every kind of public human interaction is displayed and parsed. Working with a Leica range-finder camera, and always at close quarters, Winogrand prowled the streets of New York, Los Angeles, and other large American cities, making images of people he did not know, restlessly scrutinizing them as they, in turn, scrutinized and judged each other.

Winogrand's purpose was never cheery, and his work will never win him any fans among the many devotees of lyrical humanist street photography. His images are darker and more pessimistic than those of, say, Henri Cartier-Bresson, even though both artists' pictures are governed by an almost identical set of rules: exposures shot quickly with a handheld camera; small black-and-white prints; compositions centred on the decisive moment--Cartier-Bresson's term--that magic split second when disconnected compositional elements cohere in the viewfinder.

The 15 Winogrand photographs on display at Monte Clark Gallery are some of the last works he completed before his death from cancer in the early 1980s, and they're a good introduction to his style. The first thing you notice is how their compositions are almost all skewed to the right or left. Winogrand explained this as the result of the lenses he preferred and his desire for his subjects to fill the frame, but it is equally true that his asymmetrical framing throws his subjects off balance, like people struggling to stay afoot on the deck of a sinking ship. Their physical gestures reveal psychological tics and quirks they'd just as soon suppress or don't realize they're displaying.

When you look closely at Winogrand's pictures, you also notice tiny details whose presence anchors and grounds his compositions. In the best of these images, a black couple, mother and daughter, greet a white mother and daughter on a restaurant's open-air patio. The black daughter is clearly uncomfortable with the scene; her face has frozen into a mask, and her arms are tucked in at her sides, as if she's just waded into cold water. The white daughter's back is to the camera; you can't see her face, but you do see the black button eyes of the stuffed Snoopy doll on the table beside her, which you somehow intuit as being as unwelcoming as her own. This is a terrific picture, but it wouldn't work without Snoopy. You're tempted to say Winogrand got lucky, but he got lucky way too often. All of his pictures are richly packed with this kind of incidental detail, and it's this hectic density that makes his images as memorable as they are. 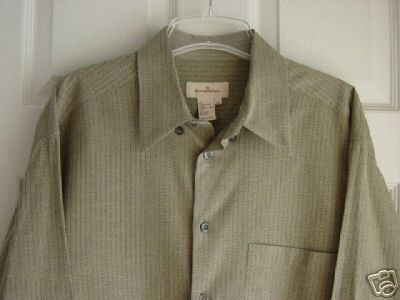 Men's XL grey-green Zegna shirt in the wild (eBay), prior to being contained in art critic's closet.

A Few Lines at Christmas for Charlie the Cat

This is an excerpt from a longer poem called The Stars at Night by Vija Celmins, work on which was postponed in favor of completing Michelina. Charlie was our West Vancouver neighbors', though he spent most of every day at our house, and we hid him in an upstairs bedroom on the last day before they moved (They didn't seem too concerned when they came over to ask -- none too worriedly -- if we'd seen him, even to the point of politely ignoring the meowing drifting from a nearby window). The first non-authorial voice is Lawrence Weiner's, the second, Bruce Cockburn's, a song that was popular in my first year of university, and often on AM 1040 on the way to or from UBC.

Charlie died of cancer in the summer of 1995. He's buried under a stringy clematis in the back yard in West Vancouver.

– gas clouds hang,
pendant, like balls on the Christ-
mas tree, overturned, “smashed
to pieces in the still of the night” –
the cat went and hid, trembling,
on top of the newspapers stacked
by the fireplace, ornament litter & pine
needles all over the carpet, water
pan skewed, sideways, on the drop
cloth -- soaked through -- dumb
beast shivering, ears back, eyes
wide, string lights in their sockets
still glowing, shattered globes & strewn
tinsel icicles – a silver jelly-
fish spilled on the floor. A beast can
not bear its own weight
out of water, gravity
collapses, holes appear
at the heart of things. “Something
other, busy monster.” Ravening
mouth.

Just finished: Haruki Murakami, Kafka on the Shore. The second Murakami novel I've completed, stylishly translated by Philip Gabriel. Much of what has stalled me out on Murakami's other novels, particularly those translated by Jay Rubin, is the affectless prose -- a parade of affiable he-said, she-said dialogue that puts me in mind of Doug Coupland's similarly flat sentences.

I remember Bernadette once criticizing something I'd written in university, saying, your language and symbols tell me this scene means something to you, but I have no clue what that is, because your words presuppose that you and I know exactly what plot elements A and B mean, and I don't. All this stuff does is foreground its own interiority.

A good argument in favor of keeping younger writers away from symbolism all together, and one I probably didn't pay enough attention to at the time.

So, with regard to Murakami, two problems: a strained Oedipus narrative tacked onto the usual parade of eccentics and fantastic occurences, and many purple passages in the main narrative, wherein young Kafka, his mother, and her fifteen year old ghost talk about their feelings like Banyen Books customers. I need, I want, I yearn, yadda yadda yadda.

Highlights? Supernatural beings, much like Twin Peaks' Killer Bob, who prowl between worlds, have no conception of human morality -- being concepts, not people -- and take on temporary forms lifted from contemporary mass culture (Colonel Sanders, Johnnie Walker). A man who talks to cats, and the many cats who talk back to him. A kind of Banff Center for spirits and ghosts, guarded by Japanese WWII soldiers who haven't aged since the war. And an accurate, and very moving account, of what it feels like to be like far away from home, and displaced from your normal routines, and how reading helps to mediate that loss. (A few pages, early on, reminded me very strongly of sitting in Borders Books, right at the western edge of the Las Vegas suburbs, reading and drinking free refills, just waiting for it to be late enough to venture out into the cold and the ten minute drive to the freezing campground over the crest of the hill).