Insert In My Obituary, Please -- found in a New Yorker profile of Hayao Miyazaki

Just finished: Paul Auster, Oracle Night. A prose equivalent of the blended beverages on sale in the health food store: a little New York Trilogy, a little Red Notebook, a pinch of the Music of Chance, & etc. Reading Auster's plain unvarnished prose is a real pleasure -- I spent a whole rainy afternoon on Skytrain, zipping around first in one direction, then the other, paying no attention whatsoever to what was going on outside, totally focused on those graceful sentences, laid one after the other like a tongue-and-groove floor. Not as happy with how the first metafictional, then magic realist novel cops out into straightforward neorealist violence at the end, though. Half a dozen plot threads -- my favorites, natch -- left dangling over the abyss, like the tree roots left behind while the rest of the hillside slid away.

A yearly challenge on clubtread.com. Cover 100,000 feet of vertical elevation gain in 365 days. Cars, the Skyride, helicopters, etc. don't cut it, just self-propelled access. I started yesterday by hiking all the way up Lonsdale Avenue from the Seabus, continuing up Prospect Road to the Baden-Powell trail bridge across Mosquito Creek. You could hear the creek from blocks away, the dull rumbling of rocks thrown around in the white water. Stood in steadily drizzle gazing down at the churning surface, a little puffed from 1000-odd feet of 15%+ grade. Then back down again, strangely at peace in the quickening rain. 360m total.

5 Card Nancy -- online exquisite-corpse version of the game below. Check out the Hall of Fame!

"Ernie Bushmiller's comic strip 'Nancy' is a landmark achievement: A comic so simply drawn it can be reduced to the size of a postage stamp and still be legible; an approach so formulaic as to become the very definition of the 'gag-strip'; a sense of humor so obscure, so mute, so without malice as to allow faithful readers to march through whole decades of art and story without ever once cracking a smile.

"Nancy is Plato's playground. Ernie Bushmiller didn't draw A tree, A house, A car. Oh, no. Ernie Bushmiller drew THE tree, THE house, THE car. Much has been made of the 'three rocks.' Art Spiegelman explains how a drawing of three rocks in a background scene was Ernie's way of showing us there were some rocks in the background. It was always three. Why? Because two rocks wouldn't be 'some rocks.' Two rocks would be a pair of rocks. And four rocks was unacceptable because four rocks would indicate 'some rocks' BUT IT WOULD BE ONE ROCK MORE THAN WAS NECESSARY TO CONVEY THE IDEA OF 'SOME ROCKS.'"

Day four of pouring rain. Along Venables this afternoon to a specialty leather cleaner, the Ace Of Suedes, with a neat old Kenneth Cole tan nubuck coat I found yesterday afternoon at Corporate Thrift Store in the Fraser Valley. What really sold me on the coat, outside of the filled-up 25% off card in my wallet, was its buttons -- great thick metal studs that you first fit through equally thick metal eyelets, then lock sideways into place, click click click click, like loading bullets into a handgun.

Down to Hastings, the rain not letting up and even intensifying. Little rivers running downhill, the drain grate at the bottom of the Frances Street hill a slalom course of whitewater. The sight of water leaping a foot or so off the road brought back memories of pre-elementary school days in West Vancouver. It sounds funny now to say this, but in 1970, when I was born, the other side of Marine Drive was forest, all the way up to the highway (The subdivisions documented by Arni Haraldsson in his Caulfeild Plateau pictures didn't arrive until the mid-1980s). Streams now piped and ditched ran free, and I remember being taken on walks by both parents, the highlights of which were miniature rapids and waterfalls at the side of the road, streams working steadily away at the recent roadcut's face. Even as late as the mid-1970s, driving up to Squamish on a rainy Sunday afternoon, after spending the morning with my dad's mom, you still had your pick of literally dozens of streams touching down along the roadside (One Sea to Sky Highway stream, M Creek, later had revenge on the tourist gawkers, taking out the highway bridge, rail bridge, and several motorists on a dark rainy winter night in 1981).

Back to work on Michelina again. Writing a children's story, I naturally find myself excavating my own (admittedly not very substantial) memories of childhood, and what I find there is much the same as now: not many people, but lots of rivers, lakes, mountains, forests, park trails, plants and animals, etc...

Someone writes to ask, not unreasonably, "Where's the Serpentine River?"

Sy Hersh gets the goods on W.'s Term II plans:

"Strategists at the headquarters of the U.S. Central Command, in Tampa, Florida, have been asked to revise the military’s war plan, providing for a maximum ground and air invasion of Iran. Updating the plan makes sense, whether or not the Administration intends to act, because the geopolitics of the region have changed dramatically in the last three years. Previously, an American invasion force would have had to enter Iran by sea, by way of the Persian Gulf or the Gulf of Oman; now troops could move in on the ground, from Afghanistan or Iraq. Commando units and other assets could be introduced through new bases in the Central Asian republics.

It is possible that some of the American officials who talk about the need to eliminate Iran’s nuclear infrastructure are doing so as part of a propaganda campaign aimed at pressuring Iran to give up its weapons planning. If so, the signals are not always clear. President Bush, who after 9/11 famously depicted Iran as a member of the 'axis of evil,' is now publicly emphasizing the need for diplomacy to run its course. 'We don’t have much leverage with the Iranians right now,' the President said at a news conference late last year. 'Diplomacy must be the first choice, and always the first choice of an administration trying to solve an issue of . . . nuclear armament. And we’ll continue to press on diplomacy.'

In my interviews over the past two months, I was given a much harsher view. The hawks in the Administration believe that it will soon become clear that the Europeans’ negotiated approach cannot succeed, and that at that time the Administration will act. 'We’re not dealing with a set of National Security Council option papers here,' the former high-level intelligence official told me. 'They’ve already passed that wicket. It’s not if we’re going to do anything against Iran. They’re doing it.'"

Received across the counter: Louis Zukofsky, ALL the collected shorter poems

Exhumed from the pile of unread books in the office and actually begun: Paul Theroux, Dark Star Safari 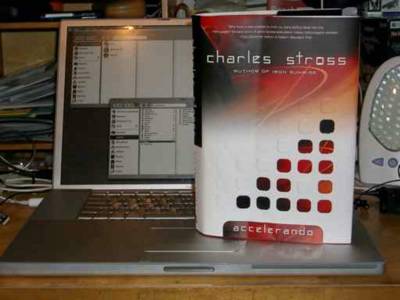 Best science fiction novel of 2005? Hot tip, kids: mid-July! (Anyone complaining about Stross' relatively weak & uninspiring Singularity Sky should remember that that first novel was written a long, long time ago, but only recently published as part of a six-book deal. Besides, I've been able to read this new one month by month in Asimov's, and can consequently vouch for its really being as described. Bruce Sterling on speed, chatty virtual cat, intelligent lobsters from a nearby star system & etc. Also a thoughtful and funny meditation on what happens to conventional economic systems once information gets super-dense. Anyone entertaining a contrary opinion after actually reading the book is, as usual, welcome to post here). 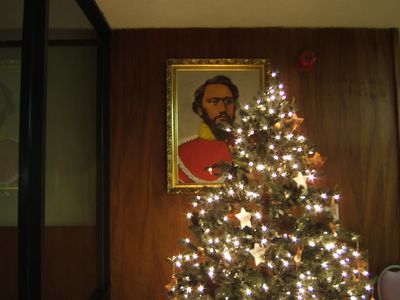