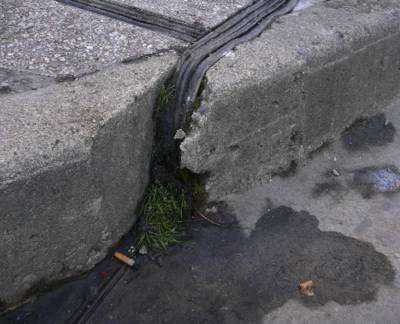 Adam Harrison, Split Curb. One of 365 'sketches,' and my early favorite. 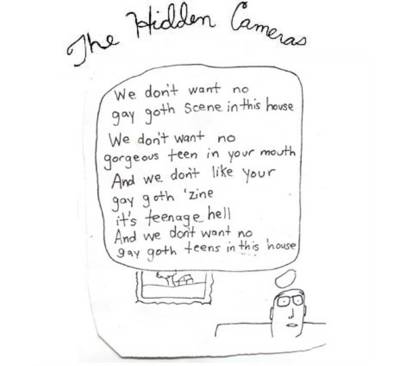 Received across the counter: William Wordsworth and the Age of English Romanticism (Rutgers UP) 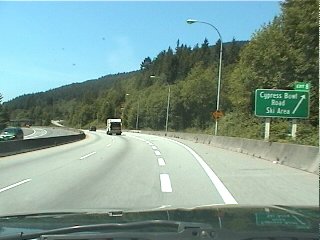 We Looked Like Giants
Lyrics & music by Death Cab for Cutie
(In my head all day, esp. the amazing chorus, "And together there/In a shroud of frost, the mountain air--")

God bless the daylight, the sugary smell of springtime
Remembering when you were mine
In a still suburban town

When every Thursday I'd brave those mountain passes
And you'd skip your early classes
And we'd learn how our bodies worked.

And together there
In a shroud of frost, the mountain air
Began to pass from every pane of weathered glass
And I held you closer than anyone would ever get

Do you remember the JAMC?
And reading aloud from magazines
I don't know about you but I swear on my name they could smell it on me
I've never been too good with secrets.
No...

And together there
In a shroud of frost and mountain air
Began to pass through every pane of weathered glass
And I held you closer... 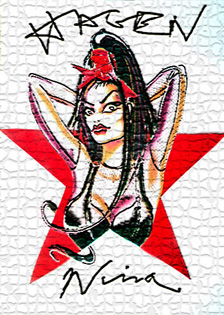 Gothic chanteuse Nina Hagen, live tonight at the Commodore! (CJB and SGB bopping happily along up near the front of the stage) 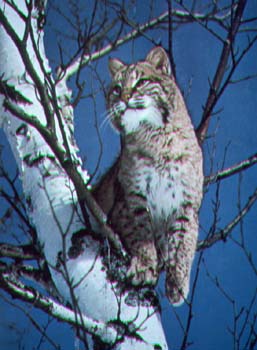 Out along Highway 7 to the Mount Woodside spring near Deroche. Curtains of snow across the valley in the Cheam Range and farther upstream near Hope. Broken sunlight through bare trees, each with an eagle in it hunting a takeout sushi lunch. And, on the way back, all six of John's blue plastic jugs filled and capped with rubber bands and Safeway bags, my first ever glimpse of this guy, lynx rufus, with his distinctive ear tufts, stumpy bobbed tail, and huge rabbit-like back feet, as he passed in front of us, scrambled down the bank to the road, and disappeared into the woods on the other side. A cat the size of a German shepherd.

The capped jugs sang all the way home, the sloshing water making their hollow necks vibrate. A kind of peeping chorus, as if the Incredible Talking Cats had all snuck into the backseat, or some really good German glitch band was cooking along behind CFMI's Jurassic Park set: Bowie, Trooper, Tom Cochrane, the Police, U2, zzz...

(Also a car full of books from Unidentified Secret Source, and a pair of black label Armani dress pants, for about 98% off retail. A terrific day out)

Picture a book lover in a Kamloops, B.C., bookstore getting his favourite author to sign a book -- from her home in Toronto.

Sound like a science-fiction scenario? Perhaps it's fitting then, that Margaret Atwood, author of futuristic fantasies The Handmaid's Tale and Oryx and Crake, has invented a prototype remote autographing device that has the potential to revolutionize book signings.

Atwood hit upon the idea for the machine after a strenuous tour for the paperback publication of Oryx and Crake that took her all across the United States last April.

"I thought, there has to be a better way of doing this," Atwood says. ". . . I am now an old-age pensioner, I cannot keep doing this. I can't keep eating Pringles [from the hotel minibar] and keep getting on the plane at 4 in the morning."

The machine, created in consultation with computer experts under Atwood's newly created company Unotchit Inc., is still in the development phase, but at the moment it will comprise two units. The first will consist of a screen, where the author can see and speak to the book reader in real-time, and a tablet on which the author will write the inscription. The second unit will be with the book reader, and will also include a screen to communicate with the author in real-time, and will have a flat book holder as well as an electronic arm and pen that will scrawl out the autograph.

The system will allow the inscription to be edited or spell-checked before being committed to paper and the quality of the signature should be identical to one done in person, Atwood says. The book reader will also be able to keep a record of the on-screen interaction with the author for posterity.

The autographing system is not meant to replace traditional readings or festivals. "It's an in-bookstore enhancement device," Atwood stresses. She expects the device to be ready for use in the next six to 18 months. The production cost of the machine hasn't yet been determined.

"I applaud anybody that tries to think out of the box about these things and comes up with a truly original idea, but it's also a wait-and-see thing," says Doug Pepper, president and publisher of McClelland & Stewart. "It has to come out, they have to perfect it, get the kinks out of it, and people have to learn how to use them and accept them. It certainly would be easier on the authors, and in terms of saving money, I would hope so -- we're always into saving money. One of the most costly things in any marketing budget is touring."

Fortunately I own the place, and won't be going anywhere soon. This guy, on the other hand, has just been canned from his job of 11 years for doing the same thing that I do day in, day out, without ever once really thinking about it.

What can you & I do to express solidarity & support, and to express disapproval at the way in which most chain businesses now see fit to police their employees' off-duty (eg., unpaid) lives?

Order those UK HC1sts from someone other than Waterstones', for a start.

Isabelle Hayeur -- reviewed here a week or two ago. Images from the artist's Artspeak Gallery show and many others

The Man in the Grey Suit

Jamie Tolagson checks in from Powell River with his take on a very old post from last May's trip down the California coast:

"Regarding the spotting of the sea lion with the shark bite, I used to see that all the time, living in California. 'The Silent Grey Fellow' has another name, used by surfers, that I prefer: 'The Man in the Grey Suit.' He is the man that you don't want to shake hands with.

Speaking of which, I got to see 'the man' for real, at the Monterey Bay Aquarium about two weeks ago. They have a juvenile great white in captivity in their deep sea tank (which is this giant swirling vortex of giant ocean tuna, hammerheads, rays, seven gill sharks, and one enormous sea turtle). They have had this white for almost 4 months now (which is a world record for whites in captivity, they tend to die in a matter of days). She is a tiny thing, about 4 or 5 feet long, but she definitely has a presence. Every once in a while, somebody in the tank will get too close to somebody else and the whole tank will just explode with movement, fish flying every which way, then slowly subsiding. They keep everybody in the tank well fed to minimize problems.

Which led me to think of a scenario that might be nice in a sci-fi story: The world has been wiped clean of human beings in one blinding flash, but (of course) one person is still alive. The person at some point in the narrative stumbles into an aquarium and wanders through its dark, humming halls. As he walks, we notice that each tank contains only one fish, the fish that ate the other fish in its tank and is now slowly starving to death.

If this were to take place at the Monterey bay aquarium and the time period was right now, I think the protaganist would find one giant sea tuna swimming laps in the deep sea tank. If the apocalypse was postponed for another 5 or 6 months, the odds might go to the little lady in the grey suit."
- posted by cjb @ 2:30 PM

"In opening arguments here at the court-martial for the soldier, Specialist Charles A. Graner Jr., his lawyers insisted that he was simply following orders and using lessons from his civilian life as a prison guard to try to maintain discipline in a war zone. Using naked and hooded detainees to make a human pyramid was much like what cheerleaders 'all over America' do at football games, the lawyer, Guy Womack, argued, and putting naked prisoners on leashes was much like what parents in airports do with their toddlers." 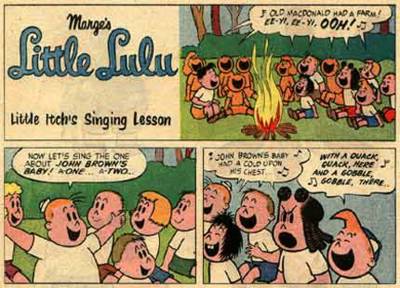 John Stanley -- online archive of one of my childhood faves 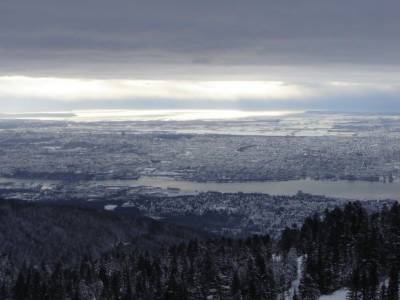 "It rains a lot, up here; there are winter days when it doesn't really get light at all, only a bright, indeterminate gray. But then there are days when it's like they whip aside a curtain to flash you three minutes of sunlit, suspended mountain, the trademark at the start of God's own movie...."

Skytrain to Surrey, long purple shadows on the snow. 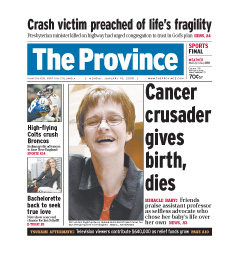 In the early 1990s, I enrolled in a graduate seminar on Malcolm Lowry. About the seminar the less said the better, with the exception of then-PhD. candidate Gabi Helms, whose ferociously insightful mind and intellectual generosity made showing up every Thursday afternoon such a pleasure.

My term project consisted of a Lowry pastiche in a cardboard box: twenty-eight pages of text with no footnotes in twelve or fourteen different fonts, accompanied by a BC Ferries boarding pass, a gin bottle, rocks from Gabriola Island, a Greyhound ticket, a photo of the Nanaimo Bastion, & etc.

While my instructor's frown kept deepening the longer she stared at it, Gabi was hooting laughter from the other end of the table. Later on we had coffee, and a long discussion about Bakhtin, at the end of which Gabi generously and thoroughly took my multimedia extravaganza apart trope-by-trope.

The UBC English Department also organized, from time to time, afternoon salons where the creative writers in the pack could read from their works-in-progress. These events were no one's idea of a good time, least of all the writers', but a few of the same faces could be seen at each event, including Gabi's, who was, so far as I know, unique in her attendance at a series she never read at, being content to merely show up, listen carefully, and then, during the infamous feedback-from-your-peers portion of each afternoon, provide thoughtful, concise, and to-the-point criticism of what she'd heard.

Critical intelligence is a rare gift, and Gabi had it in spades. Her published works -- including many terrific Canadian Literature reviews, and some crossdisciplinary pieces on visual art -- were distinguished by their concision, thoughtfulness, and respect for the object(s) of her inquiry. I'll miss her.