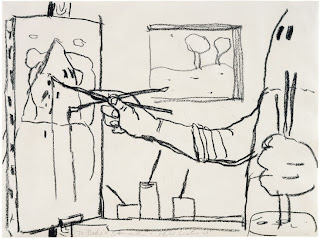 Thoughtful NYT review of a new Guston drawing show at the Morgan Library:

"[Guston] told stories of Sisyphean ennui. The beat-up, bandaged head with the big sad eye gazing uphill; the boards with nails pounded into them; the empty shoes; the man smoking in bed, staring at the ceiling: these images exude that sense of futility that almost all artists must periodically endure. Sometimes there is the relief of simple pleasures: a pile of cherries, a sandwich, sitting with one’s wife and looking out the window at the sunset. And then there is the junk-covered hillside with the gravestone at its foot presciently marked P. G. 1980.

Today the drawings don’t look as shockingly crude as they did to critics in the 1970s. They look like the work of a brilliant cartoonist knowingly inspired by 'Mutt and Jeff,' 'Krazy Kat' and other classic Sunday funnies. They may appear Neanderthal, but they are the products of a sophisticated performance, a kind of method acting."

En route to the corner trash can with the evidence, I dropped in on my comic book store neighbors for some impromptu show-and-tell:

DON THE COMIC GUY: Good going! We never had any luck with those [snap traps]. 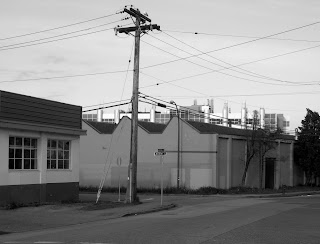 "After getting a second call, in just a few days, from a writer needing money -- this one purportedly from English writer Nick Hornby -- Book Soup's Tosh Berman didn't hesitate to cut him off. 'Almost exactly from the script he said, "I'm embarrassed to be calling you like this, but I'm at the airport. . . ."

'He really managed the accent,' Berman said of the Hornby impersonator. 'I almost fell for it. But I didn't take that trip.'

Berman speculated that this gang has several members -- one black man, one English guy, one woman -- to make impersonation easier. 'It's like the Mod Squad or something.'

Vroman's has hung up on someone claiming to be Ray Bradbury and, in late February, Ramos said, Russell Banks."

(via our South Wellington correspondent) 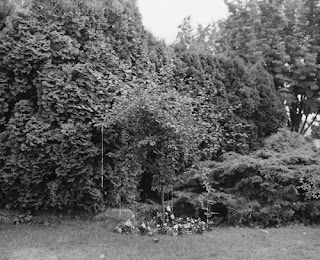 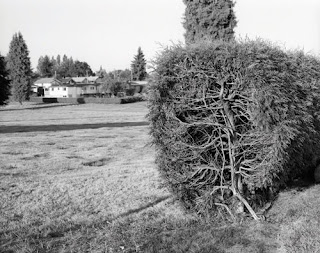 (Images: courtesy the artist and Monte Clark Gallery, Toronto. More here. I'm writing on Hedge Entrance as part of this book on photography I keep mentioning, and when EL's chapter is complete I'll post it here).
- posted by cjb @ 9:49 PM

"Hey Chris, I think I may have almost hit you with my car a few weeks back. I was making an illegal left onto Main from Broadway, and I think you had to jump out of the way a little bit. I was driving a little piece of shit Mazda 323. Sorry, dude!"
- posted by cjb @ 7:51 PM
Sunday, April 27, 2008

TRUST-FUND HIPSTER: I'm looking for Roderick Haig-Brown. Got any?

CJB: Sure, most of those books are out of print now and don't last that long on the shelf.

CJB: And all that stuff.

Flying off the Shelves: The Pleasures and Perils of Chasing Book Thieves

"Once, a scruffy, large man approached me, holding a folded-up piece of paper. 'Do you have any Buck?' He paused and looked at the piece of paper. 'Any books by Buckorsick?' I suspected that he meant Bukowski, but I played dumb, and asked to see the piece of paper he was holding. It was written in crisp handwriting that clearly didn't belong to him, and it read:

This is pretty much the authoritative top five, the New York Times best-seller list of stolen books. Its origins still mystify me. It might have belonged to an unscrupulous used bookseller who sent the homeless out, Fagin-like, to do his bidding, or it might have been another book thief helping a semi-illiterate friend identify the valuable merchandise. I asked the man whether he preferred Bukowski's Pulp to his Women, as I did, and whether his favorite Thompson book was The Getaway or The Killer Inside Me. First the book chatter made him nervous, but then it made him angry: He bellowed, 'You're just a little bitch, ain't'cha?' and stormed out."
- posted by cjb @ 1:12 PM

Warm grey West Coast spring, rain-scent in the air, deep pink petalled light of the ornamental cherry trees up and down the block. (My little cherry tree still green, its fragile lime leaves quivering). Isinglass. Television's Venus: its slow bridge, the antithesis of rock "style." Hop-skipping from note to note, here to here to here.
- posted by cjb @ 11:42 AM