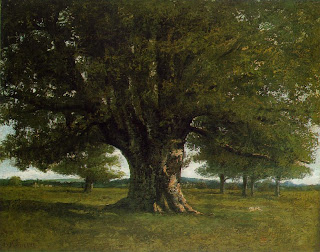 Gustave Courbet, The Oak at Flagey (The Oak of Vercingetorix), 1849 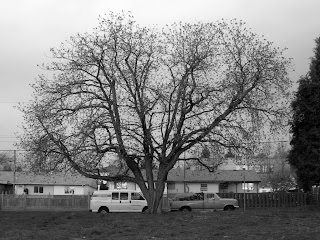 Twilight, and uncommonly cold for late April. Just as I finished up the day's photography I heard a noise that I can only compare to a dump truck full of gravel falling out of the sky. Spun round to behold a flat grey wall advancing up the lane. There are pictures after this one on the camera card, but they're all grey monochromes, as a combination of humidity and cold, unstable air proceeded to violently dump five centimetres of ice, slush and hail all over the neighborhood. Visibility: nil. I drove -- wipers flapping, ice pellets drumming off the roof like a stadium full of Guyanese percussionists -- up to Corporate Thrift Store, thinking the storm would blow over in the time it took to go book- and shirt-shopping, and then, when it didn't, drove on to K.'s end-of-semester party in New Westminster in low gear, watching cars slide off the road and into the ditch, as if en route to Whistler.
- posted by cjb @ 3:05 PM
Friday, April 18, 2008 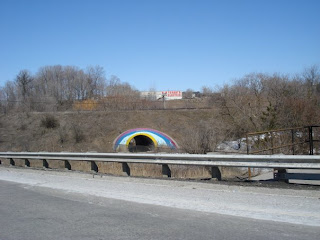 Little did I know, powering up my digital camera for the first time with the vague notion of remaking contemporary artworks I admired as a kind of folk art, that my "practice" would be anticipated and foreclosed by ace Toronto photoconceptualist Brad Phillips. 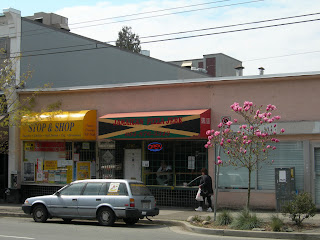 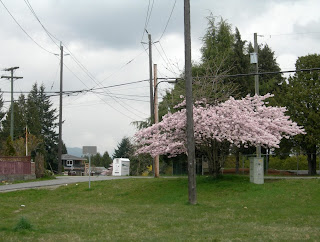 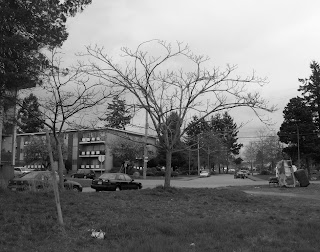 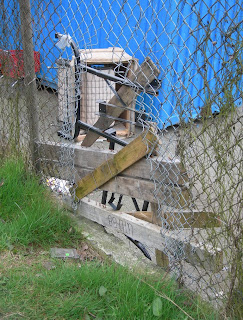 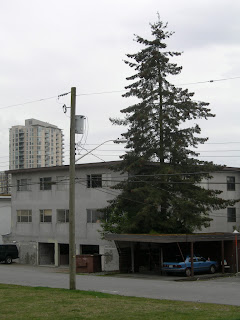 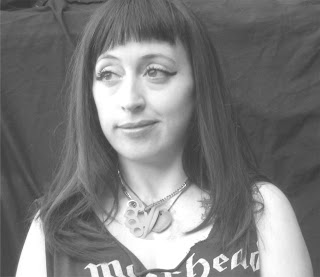 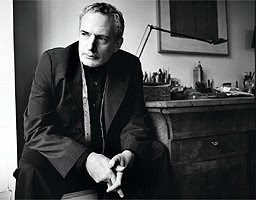 Drowning in a Sea of Love 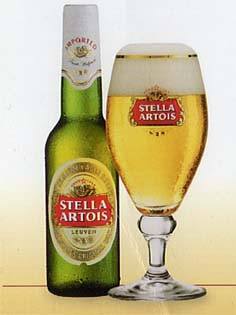 Just finishing up 12 hours of nonstop BUSI 121 statistics. A cold Stella in the fridge. And two not-quite-front-row tickets to the Steely Duo in Washington on the 30th and 31st of July.
- posted by cjb @ 10:42 PM 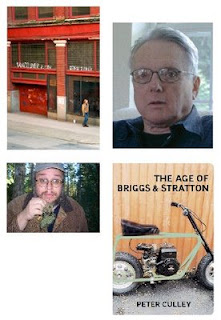 Join Peter Culley and George Stanley for a launch & reading to celebrate publication of their new books:

Vancouver: A Poem
by George Stanley

The Age of Briggs & Stratton
by Peter Culley 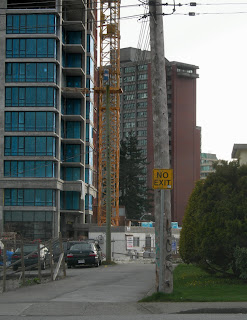 To Kingsway and Edmonds to start the hunt, spurred by the shape of a very distinctive tower block (above center). Heavy traffic in flat grey light. Kids running across the green lawn of the BC Hydro right-of-way. Apartment balconies with little nests and rafts of stuff on them. Woodpiles; chainlink fencing; open garages so full of "storage" that the cars that once parked in them now litter the lanes' edges. An endless proliferation of detail. I've lived in Vancouver my whole life and never driven 13th Street before. Nor admired the curve of the cul-de-sac protruding into Ernie Winch Park, a "spatial balloon" that would make Cezanne proud.

Michael Turner likes the Vogels, too:

"Mr. looks like he just stepped out of Van Gogh's The Potato Eaters (after a quick costume change); while from her gesture, it would seem that Mrs. acquired most of their collection at auction."
- posted by cjb @ 11:13 AM
Sunday, April 13, 2008

Another installment in what's slowly become a semi-serious game: trying to track down obscure locations depicted in certain Vancouver-based art photographs. Last night I discovered that Google Earth's satellite feature actually has pretty good resolution down to street level, and spent a productive half-hour inventorying big trees and empty lots in a local suburb. Next step: checking out the suspects one-by-one with the car.
- posted by cjb @ 3:37 PM 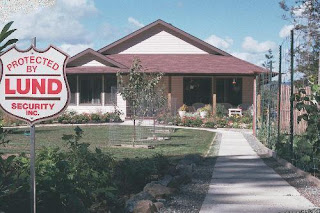 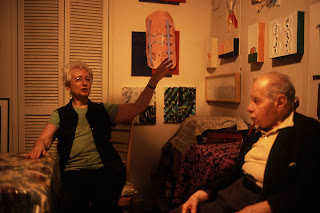 They Knew What They Liked

"Herbert and Dorothy Vogel married in 1962. They are a diminutive couple, plain on the outside but complex and passionate once you make that first effort to shake hands and engage them in conversation. The Vogels don't loom large and showy like some collectors or shrink away, either, when the conversation turns serious. My own conversation with them began on a less-than-serious note. 'Have your cats [there are five] ever destroyed any of your artwork?' I asked Dorothy. 'No, but the fish have,' she replied. Dorothy has a way of answering the most ordinary questions in the least predictable way. She was a librarian. Her husband was a postal worker. They lived on his salary and bought art with hers. Both are now retired. They have no children. 'We bought art we could afford and that would fit into the apartment,' they say. Water from the fish tank once splashed a Warhol they owned. It later had to be restored."
- posted by cjb @ 12:08 AM