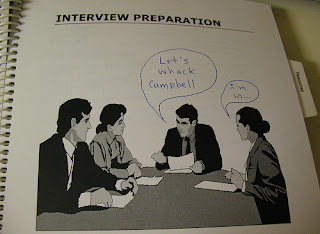 "Q: And when does it give served a correct new Steely-album?

DONALD FAGEN: We already spoke about that. I work at my next solo disk. The collaboration with Walter is very special. We put together ourselves and tell ourselves jokes. Sometime a song develops from that.

Q: Walter Becker and you developed in the course of the years a collective personality, from whose viewpoint the Steely-served told become-songs.

DF: So it is. The Steely-served is-character a complicated personality: It is a man who has no woman at its side. Therefore it can express things, that one would not say in present of a woman. It expresses sometimes incredible things, that take place otherwise only in the subconscious."
- posted by cjb @ 9:35 AM
Thursday, July 26, 2007 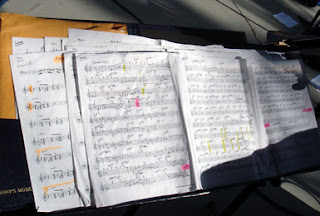 Some jackass not previously known to me writes (in part!) "...[N]ice choice of Report Date, Anodyne. Now the Market's crashing your Play Portfolio's probably dropped like a Rock...."

2. Out of interest, I recalculated Anodyne Inc.'s performance using today as the "date of record":

Relative result: 12.51% An improvement over the actual date-of-record performance, despite the Market Carnage. 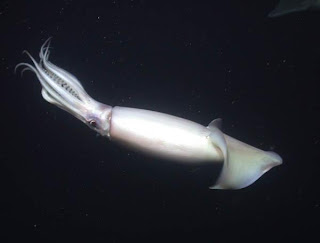 "My hand is outstretched to a true Diablo Rojo. My heart is pounding. Had this giant ever seen man before? What does he want to know? Why isn’t he attacking me repeatedly like others before him? For twelve incredible minutes we circle, reach out, withdraw, touch, and test each other. His color flashes are never the same twice and he shows no fear of me. By this time I am being surrounded by up to 100 very large Humboldt squid, but they all stay away. Scar seems interested in my camera housing so I show it to him. He comes up and spread his arms completely over it and bites the lens, making for a nice shot of his beak and radula (a spike covered tongue) in action. Scar is so huge his arms engulfs the entire camera housing and reaches beyond it to lays upon my hands, forearms, and head. Scar tenses his whole body instantly as he detects the difference between the housing and me. A second later he withdraws and stops cold. His eye stares at my forearm and camera housing as if he realizes the difference for the first time. He flashes a unique pattern I have come to know. He flushes deep red then blanched bright white and stays that way for several seconds. The blanched white pattern has preceded many a retreat after attacks on me. What does this revelation mean to Scar? Whatever the reason for his blanched white reaction, his behavior changed. He begins a more purposeful series of circling and touching. Touching my arms, CCR cover, legs, fins (which he bites) and finally, my face.

It occurs to me that this might well be the first encounter of its kind for both species. I can only describe it as a dance. A dance of peace, curiosity and discovery.

Scar and I have just completed a dance of such beauty that my words fall far short of explaining it. Two intelligent beings from entirely different worlds, separated by extremes of morphology, behavior, space and time."
- posted by cjb @ 6:52 PM

Robert Horvitz's thorough analysis and documentation of some of Chris Burden's earliest sculptures and performances, including many pieces not contained in Locus+'s recent catalog:

"I think that to some extent Burden views his work as a means of pre-empting fate. The strategy is actually quite simple. By setting up situations that test the capacity of his will, there are only two possible outcomes: either he will emerge victorious, having affirmed his mastery over the situation, or, should it get the best of him (which it hasn't ever yet), he can still fall back on the knowledge that at least he created his predicament himself."
- posted by cjb @ 3:08 PM

Enrolled in a part-time post-graduate professional accreditation program offered by the University of British Columbia's Sauder School of Business.

Five years of study, plus a one year apprenticeship.

Upon graduation, a studio-style portrait of myself dressed in work clothes suitable to my new profession.

Offered at the inflation-adjusted total cost of my tuition, textbooks, and software.

Swingin' so hard
We burned right through the summer
Till the axis of pain/pleasure sheared the arc of desire. . . .

Anodyne Inc. and the TSE 300 index have both been on a tear since my first attempt at public portfolio management toddled out into the world in late October 2006. For this first nine month period, Anodyne Inc.'s gain has significantly exceeded the TSE's.

The TSE figure is important because it shows what you could earn by passively investing your money in an index fund, thereby missing out on annual report reading, financial statement deciphering, and ceaselessly worrying when the CFO of one of your largest positions is dismissed just a week or two before the annual report's release. The index also serves as an objective benchmark of my investment decision-making. If Anodyne Inc. reports a 5% gain while the index gains 15%, Anodyne's gain sounds OK on its own, but actually represents poor relative performance. Similarly, if Anodyne loses 12% while the index loses 18%, the relative result indicates better-than-average performance, despite the objective loss.

I judge my performance as you should, over the mid- to long- term. I hope to consistantly beat the TSE 300 index over a rolling three year period, a benchmark that many professional Canadian fund managers find hard to meet. Over shorter time periods the portfolio may fluctuate in value, sometimes impressively. These fluctuations don't bother me, and they shouldn't bother you, either.

That said, I have certain advantages that most real fund managers don't. I'm running money for myself, as a purely didactic enterprise. Real managers have clients, and need to maintain a cash position to satisfy the needs of clients who, for whatever reason, need to cash out in a hurry. I am not constrained by investment "themes" or "styles" -- I don't have to buy "mid-cap growth," or "large cap value," or maintain a certain percentage of the portfolio in a number of different sectors of the economy in the name of "diversification." I don't have to buy the stock of companies I don't personally like or understand. And I don't have to trade like mad, with all the frictional costs that implies, in order to hit a quarterly performance target that benefits the marketing department more than the fund's investors.

Few readers seem to care about the portfolio, but those that do ask very focused questions. Each quarter, I briefly discuss some of the portfolio's holdings, and try to give some insight, however brief, into my decision making process. I've learned a lot from master investors like Benjamin Graham, Warren Buffett, Martin J. Whitman, and Canada's own Irwin Michael, who have generously discussed their own decison-making in public, thereby enabling amateurs like me to learn from their example. Investing -- as opposed to day- or momentum trading -- is a craft, and, as with any craft, one learns best by watching, listening, and reading.

Today, I thought I might discuss some ideas that guide my security-selection process. Most of the portfolio's holdings carry lower P/E (price-to-earnings) ratios than that of the TSE 300 index. The P/E ratio represents the price you have to pay to get your hands on $1 of the business' current earnings. Eg., if Company X sells at a P/E of 15, you're paying $15 for every dollar earned by Company X. And in my world (as opposed to the impenetrable and foolish worlds of momentum trading, "technical analysis," etc.) dollars earned by companies -- their operating results -- are the only way that you as an investor make any money, either because the company pays out earnings as dividends, or retains the money as "retained earnings," which will presumably either be paid out to you later on, or reinvested in the business to help it grow. (I am simplifying somewhat; change-of control and going-private transactions can also make you money, but the timing of these events is a lot harder to anticipate, and consequently riskier, than simply focusing your attention on basic business results).

[For detailed discussions of change-of-control, going-private, & etc., see Martin J. Whitman, The Aggressive Conservative Investor, and Joel Greenblatt's excellent, if goofily-titled, You Can Be A Stock Market Genius.]

A few other thoughts. I like companies that pay dividends. (Portfolio examples: Norbord (NBD), Loblaw (L), Amerigo (ARG), and the income trusts). Dividends are hard to fake; if the company is borrowing at the bank to pay the dividend, this information is easily divined from the financial statements. Steadily increasing dividends or cash distributions? (Hart Stores (HIS), Parkland (PKI.UN)) Even better.

I like companies whose basic business models are describable in plain English. I tend to get bored by or have very little patience with companies whose business models rely on industry-specific jargon. I'm sure that there are biotech companies and technology companies that are bonanzas for their shareholders, but with a few exceptions (ie., Microsoft (MSFT), in the Anodyne Inc. US$ portfolio) I lack the specialized skills required to evaluate them. I like industries I can relate to jobs I've previously held. I purchased Amerigo Resources (ARG) for the portfolio after realizing -- on the bus, on the way to work -- that Amerigo was, at heart, performing exactly the same job that my brother dru and I did as kids, hiking down to Thunderbird Marina every Sunday, sorting through the marina dumpsters, and retrieving cans, bottles, lead batteries, etc. from them. (Amerigo is recovering copper and molybdinum from a big pile of mine tailings in Chile, but the business model is identical in every respect).

I like companies that don't shower their executives with stock options. The old song and dance that goes, "We have to compensate our executives competitively, or they'll walk," is bullshit, if amusing bullshit. My favorite employee -- me! -- is motivated by a deep personal identification with his work that transcends financial renumeration. Sure, but you're an owner, says the counter-argument. Yes, and Pulpfiction's staff are workers, who were first paid minimum wage, then better-than minimum wage. Then came cash bonuses, and the health and dental plan. Would I -- and the staff -- have been better off if we were all showered with goodies on day one? Clearly not: better-than-average business productivity means better-than-average profits, which dictates better-than-average staff renumeration and benefits. But the business results dictate the compensation-and-benefits package; good things don't just materialize out of thin air.

"Despite a full complement of thieves, pushers and pirates, Spook Country is less a conventional thriller than a devastatingly precise reflection of the American zeitgeist, and it bears comparison to the best work of Don DeLillo. Although he is a very different sort of writer, Gibson, like DeLillo, writes fiction that is powerfully attuned to the currents of dread, dismay and baffled fury that permeate our culture. Spook Country -- which is a beautifully multi-leveled title -- takes an unflinching look at that culture. With a clear eye and a minimum of editorial comment, Gibson shows us a country that has drifted dangerously from its governing principles, evoking a kind of ironic nostalgia for a time when, as one character puts it, 'grown-ups still ran things.' In Spook Country, Gibson takes another large step forward and reaffirms his position as one of the most astute and entertaining commentators on our astonishing, chaotic present."
- posted by cjb @ 1:12 PM