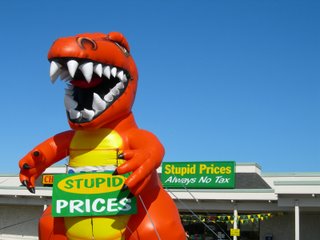 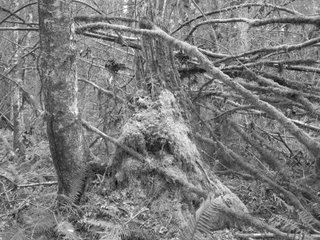 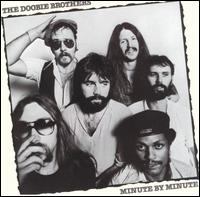 What a Fool Believes

But what a fool believes he sees
No wise man has the power to reason away
What seems to be
Is always better than nothing
And nothing at all keeps sending him...
- posted by cjb @ 12:17 AM
Friday, April 21, 2006

Black and white digital photographs of unidentified deep woods, taken in and around the Lower Mainland and on Vancouver Island. Spurred by a Takao Tanabe charcoal drawing of a forest interior in the artist's recent VAG retrospective, which Adam Harrison and I admired for its "photographic" framing. Also in the back of my mind: Emily Carr's charcoals, the silvery grey light of Jack Shadbolt's Hornby Suite, and the springtime walk Culley and I took last March along the E&N rail tracks south of Nanaimo.

No domination of any single part of the picture plane. (De-emphasis of figure/ground). 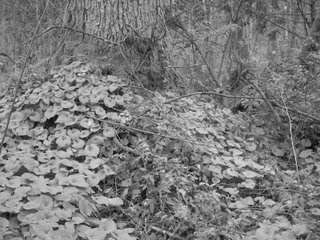 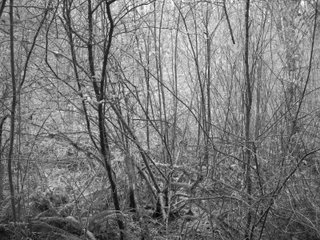 To one Internet mega-seller and a procession of small paperback exchanges, in an undisclosed Pacific Northwest location.

Seller A has shrink-wrapped banana boxes of bargain books stacked fourteen feet high in his suburban industrial warehouse. Several have toppled, spilling out an avalanche of Book Club hardcovers, diet books, and Lawrence Sanders thrillers: a three foot deep wave of pulp. Other pallets of boxes have, after fourteen-plus months of inattention, crushed the pallets beneath them, and these deformed, shrink-wrapped masses protrude from the sides of the towers like giant termite pupae.

No heat in the warehouse, and no lights, either. Seller A's employees navigate by mountaineering headlamp, like dwarves emerging from the Mines of Moria.

No heat in Seller B's shop, either. Seller B sits, swaddled up in coats and blankets like some low-rent Dickensian villain, beside his till. Seller B hates all other dealers, so my unnamed dealer pal and I conduct some disinformational chat back and forth as we go about assembling stacks of underpriced paperback originals. I feel no particular shame about this, as Seller B was once aggressively rude to fourteen year old me in a different shop in a different city.

Dealer C is loading banana boxes of books into his car out the side door of a Salvation Army store. Nothing special -- Johanna Lindsey, Martin Cruz Smith, Berenstain Bears. Dealer C has never met a book he doesn't like.

Seller D, a formerly prosperous local realtor, sits in his small shop dressed in shirt and tie, turning the pages of a paperback thriller and glancing up occasionally into the weak spring sun. No customers in the half an hour we browse, just the hum of the fluorescents and the sound of dust settling on Piers Anthony, on Nora Roberts, on Faye Kellerman and the Canadian Handbook of Actuarial Science.
- posted by cjb @ 6:30 PM 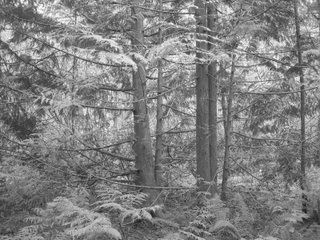 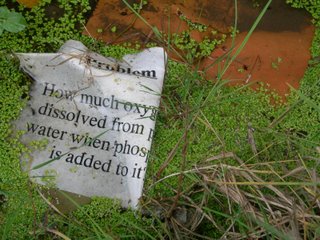 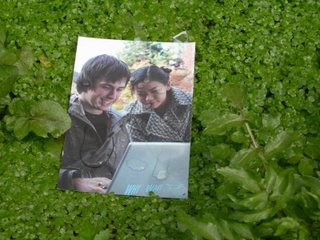 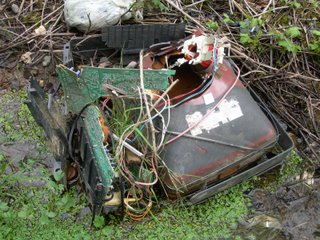 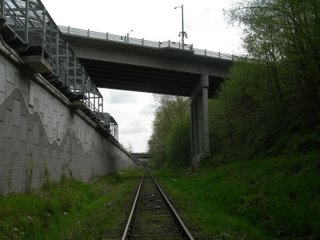 The Grandview Cut in warm grey overcast. Walked from False Creek Flats to Still Creek yesterday, something I've always wanted to do. When depressed, do something new, & etc. You glimpse the Cut from the windows of the Millenium Line Skytrain (whose elevated track is visible, above, at upper left, receding back into the distance), but what you don't see are the little creeks and streams running along the sides of the Burlington Northern tracks; the mallard couple quacking in a surprisingly clean and healthy-looking pool; the free newspaper boxes dropped or hurled from overpasses; the horsetail ferns pushing up through the mossy banks; and the zillions of TV sets, soaked newspapers, graffitti tags, detergent boxes and ghosts littering the landscape. A vast polyphonic array of cracked and rotting modernity, interspersed with little snippets of 19th-c. pastoral.

The walls of the Cut are pretty good acoustic baffles; what I mostly heard on this hour and a half walk was birdsong and rushing water.
- posted by cjb @ 9:50 AM
Tuesday, April 18, 2006 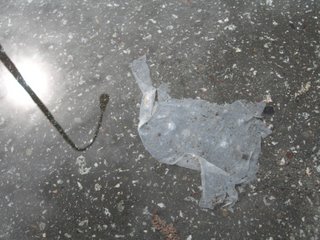 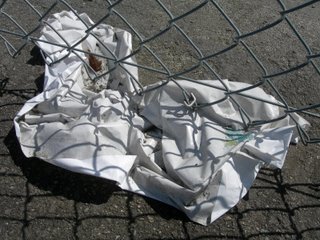 Garage Kubrick city, baby. Somehow precisely capturing how I felt for most of the 1980s, and bearing more than passing resemblance to most of my early fiction. Check out the thoughtful intermingling of sound and moving images: those endlessly cycling escalators, those half-blurred deaccelerating trains. The bear ears are a real touch of genius.
- posted by cjb @ 10:14 PM 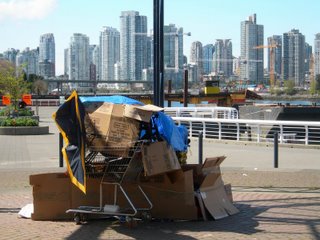 Made while ghost-hunting near Science World. Drawn to my attention by the well-dressed man at rear left, who had just finished screaming at them, and then interrupted my picture-making to loudly lament the "addicts shooting up in front of kids." So I walked over to talk to them.

A couple, man and woman, about my age, with open needle wounds on their forearms and poorly-concealed needles on the sleeping bags drawn up around them. The man reflexively apologized and asked if he was offending me.

No, I said, and asked if I might make a portrait of them.

Both asked if I was interested in them because they were using drugs.

No, I said, I'm interested in how angry the man was who just confronted you.

What do you think?, asked the woman.

I think his anger is misplaced.

Will you pay to take our picture?, asked the man.

No I won't, I said. But I will try to make a good picture.

The man and woman briefly conferred among themselves.

Please don't photograph us, said the man. We just want to be left alone.

Can I photograph your shelter?

If I say no, will you still?

This is the best of three exposures, and it is dedicated to Vancouverites Roy Arden and Bob Rennie, for very different reasons.
- posted by cjb @ 9:14 PM
Sunday, April 16, 2006 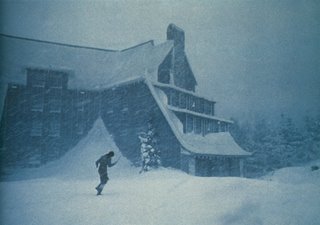 BRAYSHAW: ....The North Shore hidden behind successive waves of blowing snow, like those shifting CGI curtains that seal Jack, Wendy and Danny off from the rest of Colorado.

BRAYSHAW: Ie., fake "curtains" of drifting digital snow. Also seen in that movie with the Statue of Liberty all frozen up in ice.

TOLAGSON: I'm lost. Are you talking about that TV movie of "The Shining?"

BRAYSHAW: Uh, no. Some screen grabs from the Kubrick film, which I saw online a while ago, showing the hotel with mega-snow dumping down all around, visually "isolating" the family from the outside world.

TOLAGSON: [laughing his ass off] There ain't nothin CGI about that snow you see falling in that still. Kubrick would have had to have been quite the computer effects pioneer to pull something like that off in 1980. It's fake snow alright, but the kind that blows out of wind machines.

BRAYSHAW: You win. I suck.

JACK TORRANCE: It's all Danny's fault. Nothing but trouble, that kid.

James Taylor on the Legacy's crackly FM radio, blatter of rain and hail off the windshield, the blower working frantically to clear a transparent crescent moon on the foggy glass.

The panicked matron on her way to Easter Mass who spotted me in the Kingsway crosswalk at the last second and stood on her brakes, bouncing her wizened, shawled mother in the shotgun seat off the windshield.

The North Shore hidden behind successive waves of blowing snow, like those shifting CGI curtains that seal Jack, Wendy and Danny off from the rest of Colorado.