Non-Vancouver readers may appreciate some context for today's image.
- posted by cjb @ 10:40 PM 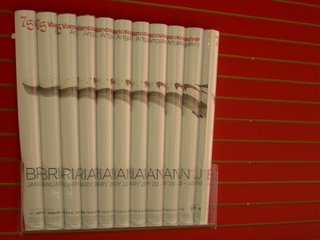 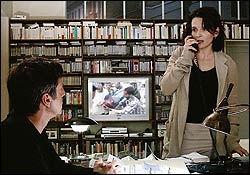 Just back from Michael Haneke's Cache, at Tinseltown.

A year or two ago, I rented Haneke's Piano Teacher, starring Isabelle Huppert, with the idea that I was renting a black kink-themed comedy. What I saw instead, first with shock, then with mounting admiration, was a psychologically nuanced portrait of an obsessive personality, an elegantly directed modern tragedy on a par with Coetzee's Disgrace, or Richter's Baader-Meinhof paintings.

Cache moves deliberately slowly; many scenes are either visually static, or unroll in "real" viewing time, then roll back, alerting you to the static image's status as a pre-recorded thing. It's like watching an interlinked series of moving art photographs; at many points, I felt as if I was watching the before and after of a Jeff Wall picture.

Cinema hardly ever triggers an "art response" in me -- I almost always watch it as illustrated narrative, with an eye toward plot development, dialogue, etc., and less frequently for image-composition or cinematography. But Cache's steady, relentless juxtaposition of static and mobile scenes, coupled with its lack of a musical soundtrack, amazing staging and lighting, and the rich performances of Juliette Binoche and Daniel Auteuil, prompted my close attention.

Aspiring photographers of people can learn a lot from how Haneke frames even his incidental players -- Auteuil's character's bedridden mother; the son of the Algerian boy she once tried to adopt as a young woman -- with a gaze both tender -- in the sense of "showing each character off" at his or her best, by not reflexively prejudging them -- and dispassionate, in that Haneke treats both psychopaths and innocents with equal lack of prejudgement. This has led a lot of critics to label him "cold" or "dispassionate" or "existentialist," epithets that typically get slapped on anyone who's unafraid to make their audience really work at identifying what makes their characters tick. I prefer to think of Haneke as an artist like Goya, Manet, Wall, or, for that matter, Ian McEwen: creators who do their subjects, and audiences, the courtesy of witholding their own opinions of their characters.
- posted by cjb @ 9:20 PM 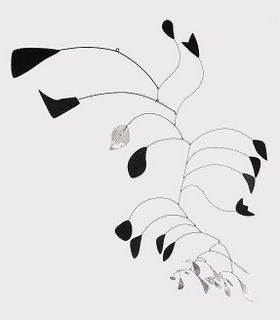 Calderoids -- yet another modernist coin-op mashup with real play value from the talented Canadian creators of Pac-Mondrian.
- posted by cjb @ 12:39 PM

Graupel: a small white ice particle that falls as precipitation and breaks apart easily when it lands on a surface. Also called snow pellets, soft hail.

Sucker window! Half an hour of dramatic sunlight and ragged skies, followed by the biggest, blackest, fastest clouds in recent memory. Invading Mordorish armies, chewing up that little silhouette of sky between the side of the Lee Building and Architectural Antiques (see Untitled (Sky) in the archives for a schematic view of same).

The rain begins again, driving against the pavement hard enough to kick up spray.
- posted by cjb @ 6:21 PM

Horizontal blowing rain and sleet, the Subaru's windshield and hood covered this morning in a sodden mass of slush, as if the world's biggest unflavored Slurpee had been upended over the car.

Driving to work, late, the heater on full blast. Fist-sized holes of clarity in a windshield the color (& transparency!) of Long Beach fog.

The buses sluicing by, fantails of water showering the curb. Local budget sushi joint deserted, "I Will Survive" in place of the usual Cantonese instrumental pop-muzak.

Lemon Breeze tea with honey, the "secret stash" not displayed anywhere on the Cuppa Joe counter.

"I think it could also be put this way: Astonishment is essential to a change of aspect. And astonishment is thinking."
- posted by cjb @ 3:28 PM
Monday, March 06, 2006 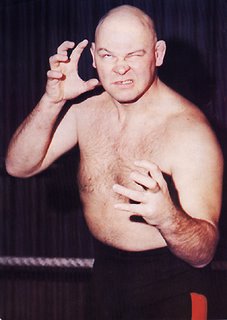 Baron Von Raschke of the American Wrestling Association (AWA). Fond elementary school memories of apples, ice cream, and b&w televised mayhem. Or in other words, Sunday afternoon c. 1980-2 at my "Esquimalt Grandma's" -- Louisa Brayshaw, my father's mother -- in her small, neat third floor Ambleside apartment, with Inuit carved snow goggles and hunting implements -- originally purchased by her Arctic navigator husband, James Brayshaw, from their makers -- hung on the wall by the delicate Edwardian china and the long teak dining table that sat in shadow year round. Out on the narrow balcony, a sliver of the Lion's Gate and a single arch of bridge visible between two smaller buildings. Trees in bud all along Esquimalt Avenue. The thick green leaves of the summer chestnuts and the buildings' carefully manicured lawns. Her soft voice and curly white hair. And her hand at the window, pulling back the bedroom's knit curtain, to gaze down at us as we waved and drove away.

[CJB staggers out of bed, naked under dressing gown, pads in darkness through the apartment, retrieves ice axe from the umbrella stand in the front hall, throws apartment door wide open, murder in his eyes]

CJB: WHAT THE FUCK DO YOU WANT?