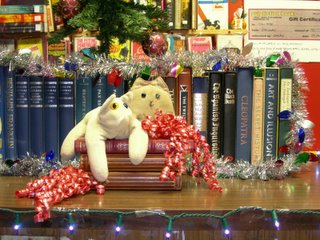 "Now, I have been drawing Klein groups and semiotic squares ever since I first met Rosalind Krauss, and the reader by this point will not be surprised to learn of how fondly I remember sitting in her office conjugating the semiotic neutralization of things like the terms of gender and sexuality, some twelve years ago."
- posted by cjb @ 7:40 PM 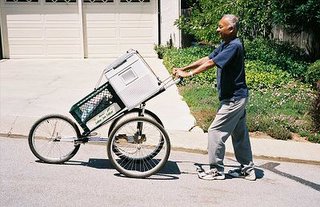 The Long Journeys of Dinesh Desai -- a Lawrence Weschler character writ large. Well written and illustrated accounts of kayaking the Salton Sea, hiking across Death Valley in the middle of July, & etc. There is more than a little artist-in-general in Mr. Desai; I admire his excellent prose, great sense of humor, and totally undiminished sense of wonder.
- posted by cjb @ 9:35 AM

Jean-Francois Chevrier's "The Adventures of the Picture Form in the History of Photography" (1989), finally translated in and the highlight of the Walker's Last Picture Show catalog:

"The restitution of the picture form (to which the art of the 1960s and 1970s, it will be recalled, was largely opposed) has the primary aim of restoring the distance to the object-image neccessary for the confrontational experience, but implies no nostalgia for painting and no specifically 'reactionary' impulse. The frontality of the picture hung on or affixed to the wall and its autonomy as an object are not sufficient as finalities. It is not a matter of elevating the photographic image to the place and rank of the painting. It is about using the picture form to reactivate a thinking based on fragments, opennness, and contradiction, not the utopia of a comprehensive or systematic order. There is a return to classical compositional forms, along with borrowings from the history of modern and premodern painting, but that movement is mediatized by the use of extra-painterly models, heterogeneous with canonical art history -- models from sculpture, the cinema, or philosophical analysis."
- posted by cjb @ 8:43 AM
Monday, December 19, 2005

Wildlife Author Killed, Eaten by Bears He Loved -- from the Anchorage Daily News

"Treadwell's films of close-up encounters with giant bears brought him a bounty of national media attention. The fearless former drug addict from Malibu, Calif. -- who routinely eased up close to bears to chant 'I love you' in a high-pitched, sing-song voice -- was the subject of a show on the Discovery Channel and a report on 'Dateline NBC.' Blond, good-looking and charismatic, he appeared for interviews on David Letterman's show and 'The Rosie O'Donnell Show' to talk about his bears. He even gave them names: Booble, Aunt Melissa, Mr. Chocolate, Freckles and Molly, among others. A self-proclaimed eco-warrior, he attracted something of a cult following too. Chuck Bartlebaugh of 'Be Bear Aware,' a national bear awareness campaign, called Treadwell one of the leaders of a group of people engaged in 'a trend to promote getting close to bears to show they were not dangerous.

'He kept insisting that he wanted to show that bears in thick brush aren't dangerous. The last two people killed (by bears) in Glacier National Park went off the trail into the brush. They said their goal was to find a grizzly bear so they could "do a Timothy." We have a trail of dead people and dead bears because of this trend that says, "Let's show it's not dangerous."'"
- posted by cjb @ 9:47 PM 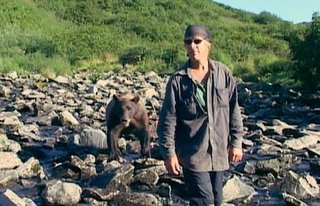 To Werner Herzog's Grizzly Man, which I somehow missed this summer.

The best film I saw this year, and one that, twenty-four hours later, I'm still struggling to assimilate. Largely composed of footage shot by pathologically idealistic Timothy Treadwell (foreground), prior to being attacked and eaten by a fuzzy pal (rear). Edited by Herzog, who adds voice-over narration and riveting interviews with Treadwell's friends and family, the bush pilot who dropped him off in the Alaska wilderness every year for thirteen summers, the coroner who performed the autopsy on the four "plastic bags of people" retrieved from the dead grizzly's gut, & etc. This sounds like black hubris-meets-nemesis comedy, and some of it is (the grotesquely overacting coroner; Treadwell bounding on stage to shake David Letterman's hand; the revelation that Treadwell was the #2 choice, after Woody Harrelson, for the bartender role on Cheers), but ultimately Herzog's film is a moving study of a man who, for complex internal reasons, could not fit into his own culture, a problem for which there was and unfortunately is no solution. Herzog also admires Treadwell as a fellow filmmaker, and his thoughtful "mix and translation" of Treadwell's raw footage is remarkable for how it simultaneously opens up Treadwell's troubled personality and his profoundly moving attachment to "his" animals and the Alaskan landscape.
- posted by cjb @ 9:12 PM 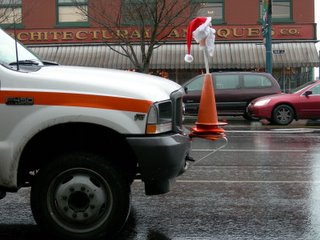 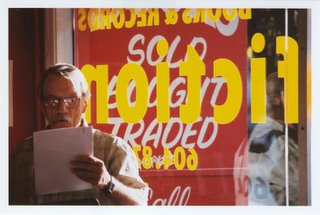 George Bowering reads Q&A in Pulpfiction's living room, summer 2005. Photograph by my friend and co-conspirator Chris Clarke, a striking image I've been waiting to share for a long time.


Where are the snows of yesteryear?


Don’t bother looking around.
Either they have long melted into the air
that fish glide through,
or they are heaped behind your heart
where no one will ever see them.


What is the meaning of life?


The condition or attribute of living
or being alive; animate existence.
Opposed to death. Whoever killed
Cock Robin holds the key to that
mystery. You do not, no more than
do those fish below the pier.


That is not even a mystery,
we say at first, until someone
asks us to define all our terms, such as
heart-beat. Some people say we die
to make room for strangers, does that
answer your question, stranger?


Is it nothing to you?


Nothing, I agree, is sacred, zero
is to be worshiped, there is nothing
in the heart, next to nothing in the
imperfect life. Caring is another thing,
there is nothing behind true caring.


Our subject here is death. That and life.
Do you think I would kid you about that?
You who do not even know the whereabouts
of the snows of yesteryear? You innocent!
When I am kidding about death and life
you will be the first to know. Make that
the last.


When I took on the job of answerman,
I planned to reply:
Wouldn’t you like to know?
How should I know?
That’s for me to know and you to find out.
Search me.
If I told you, we’d both know.


All I can tell you, little fish,
is that you are not winning. Your chance of winning
is zero. Follow your heart if you like­­
it’s not going anywhere. The game, if that’s
what it is, is as good as over. You don’t want
to know the score.


It all depends. If a certain guest shows up,
you are for dinner. If not, we are serving heart.


Do you believe in a Supreme Deity?
He hates you like the dickins.
He hates you so much that whenever you are around
he likes to kid about death and life.
If you weren’t so tied up with the meaning of life
you might have learned something. Where’s
your sense of humour?


Whoops, I asked a question there.
I’m not supposed to ask the questions around here.
I don’t give a shit where the snows of yesteryear
might be. Sorry, you were saying­­?
Whoops, that was a question mark, eh?
Whoops!


Ask your heart. Look behind your heart
where the cold is, ask the dinner guest,
ask your Supreme Deity. You don’t even
know who I am. Why are you asking me
all these questions? Whoops, there I go again.


Where are you going?