No Reply At All

The shop's email is currently hooped, and will likely remain so for the next 24 hours, courtesy my pals at Telus. With friends like these.... 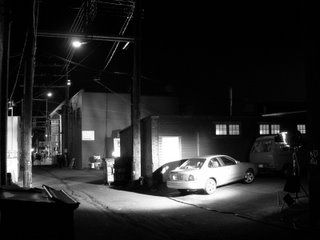 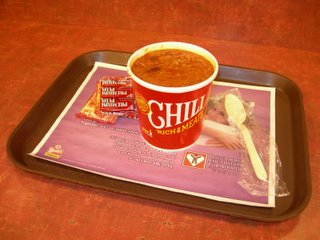 1. Black and white is an abstraction of the colored world we experience daily. A b&w picture should be b&w for a reason; it should enable us to perceive something that color would only make illegible or obscure.

2. Because photography was almost exclusively black, white, grey and silver for so long, artists working in b&w quickly developed very sophisticated means of conveying information that did not rely on color's presence. Hence the "modernity" we readily perceive in the compositions of artists like Fox Talbot and Atget.

3. Color photography (and by this I mean works made with color film, and not tinted or painted images, like those of Edward Steichen) suffered from early critical and commercial neglect. It is amazing, for example, to learn that Stephen Shore's were the first color photographs to be acquired (as opposed to exhibited) by the Museum of Modern Art, or to read contemporary reviews attacking the images presented in Sally Eauclaire's The New Color Photography (1981).

4. Art should never simply reprise the "look" of the past; this is called "conservatism" (I am thinking of figures like painter Odd Nerdrum, or photographer Michael Kenna). When I claim that b&w is something to work against, I speak as a photographer who admires b&w's capacity for abstract truth-telling, and realizes that these compositional strategies can't simply be mapped onto color. Color must find its own way of condensing information, its -- in Greenberg's words -- "own proper means." This seems to me an extraordinarily open path to pursue. I don't think that this represents any kind of foreclosure or diminishment of creative potential. If anything, the opposite is true: photography is a Janus-faced medium, and we learn by first turning one face toward the light, then the other, and studying the difference in the shadows cast there.
- posted by cjb @ 9:08 PM 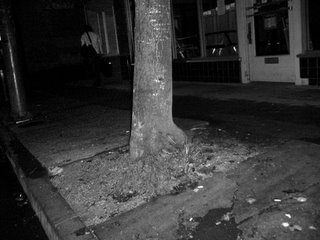 Adam Harrison writes at length regarding black and white photography:

"While I am interested in what you have been saying about black and white
photography, it seems that the strictures you have created for yourself
can only be counter-productive to good picture-making. As I believe you
also do, I think that really great art has only ever been made by a
simultaneous reverance of the past and a blind leap towards the future.
But I don't think that looking forward means restricting the forms of
the 'past' from one's repetoire. Painting is not obsolete because it
still exists; therefore it is contemporary. Same goes for black and
white photography.

There are new possibilities for b&w ones that did not exist in the days
of Atget, or of Evans, or even until this decade. No one, for example,
that I know of, has made serious black and white work using digital
technology in the way that, say, Scott McFarland has. It was not even
concievable to make a truly monochrome digital print until very recent
inkjet technology.

The figures you name -- 'Atget; Hill & Adamson; Winogrand; Evans; the
Bechers; Friedlander; Fox Talbot; Julia Margaret Cameron; Nadar & etc.'
-- are not black and white photographers, but rather photographers, or
simply artists. They have not exhausted the possibility of black and
white any more than Velazquez, or Vermeer, or Newman have colour.

Things look a certain way, depicted in the manner they are, and looking
at things in different ways can only be fruitful, never redundant. The
'private museum in your head' is not watching from above, but rather
more like the figures all but invisible in Jeff Wall's Night; deep in
the shadows of all of your images, waiting there for you to do them
well." 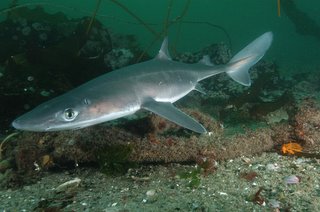 "These are curious and harmless sharks that will often closely approach divers and on occasion accompany them on their dives. If divers are buzzed by a dogfish they can often be recalled by tapping two stones together. The dogfish seem to find this irresistible and will repeatedly return to satisfy their curiosity. If engaging in dogfish feeds it is possible to play tug of war with these little sharks. Care should be taken to avoid their mildly venomous spines."
- posted by cjb @ 9:35 PM 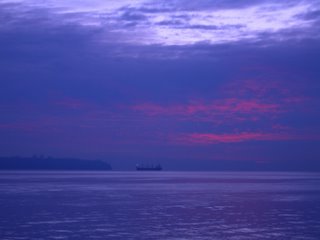 To North Vancouver, to have the Subaru's leaky CV joint examined. Then, with the rest of the day off, and few hours left before Peter Schuyff's opening, to Dundarave, and the West Vancouver seawall. Three or four kilometers of concrete sidewalk, just above the high tide line.

Hustling along in the cold flat light. Late afternoon sun reflected on the big mirrored windows of the apartments on Bellevue Avenue. Diving ducks bobbing just off shore, a bulk carrier angling under the bridge into the inner harbor. Kayakers, the plash of their paddles clearly audible on shore.

My friend Steve's parents, who I haven't seen since his Toronto wedding (pre-Anodyne), out walking.

"Is there a name for this kind of photography you're doing?"

Out on the 14th Street Pier. Fishing lines ranged off the pier's far rail, twenty feet above the ocean. A group of young guys in puffy ski jackets, two Koreans and two eastern Europeans, stand in a semicircle. One of the Europeans half-kneels, jerking hard with his arm.

"Look, shark," says one of the Koreans to me as I approach.

A big grey dogfish, as long as my arm, lies gasping on the pier's wet boards. The other Korean has his foot on its spine, holding it motionless. The kneeling European has a pair of pliers in his hand and is viciously trying to extract a hook from the side of the shark's jaw. "Fuck," he says, working the pliers back and forth. "Fuck."

"I'm not leaving a $2 hook," he says, and jerks back the pliers. Blood flows from the shark's mouth. It convulses, thrashing from side to side, unbalancing the Korean whose foot holds it in place. He swears and stamps down hard, once again pinning the animal. The European yanks once, twice, and extracts his hook, along with a long strip of fish-flesh.

The Korean with his foot on the dogfish grabs it by the tail and lifts it up. Its grey face and white belly are smeared with dark blood. It thrashes from side to side as the other Korean takes its picture with a digital camera. Pop of the flash in the failing light.

"Big fucker," says the European with the pliers to his friend. "Fucker tried to bite me."

The Korean with the camera retrieves a black plastic garbage bag from a bench and holds it open. The other Korean guides the thrashing, bloody dogfish inside, ties the top of the bag with a clumsy bow, and sets it down beside his bait-box.

The Europeans drift back to their own lines. The Koreans lean beside one another on the pier railing. The one with the camera shows his friend the picture he took on the camera's display screen. 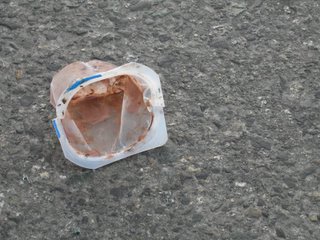 Fraser Street, en route to a mystery collection in Steveston. Blue Rodeo's sprawling (7 minute!) Five Days in May (1993) on the radio at the stoplight, a song I haven't heard in years:

"Sometimes the world begins
To set you up on your feet again
and oh, it wipes the tears from your eyes.
How will you ever know
The way that circumstances go
Is gonna to hit you by surprise
Oh I know my past
You were there
In everything I've done:
You are the one."

Organ and piano gliding together, traffic moving again, red taillights in the rain, the new wiper blades clicking over.
- posted by cjb @ 9:20 PM

we have logged your IP-address on more than 30 illegal Websites.

Please answer our questions!
The list of questions are attached.

(attached: an Internet worm and assorted other malware. You'd think a big organization like the FBI would be able to afford virus-whacking shareware, wouldn't you?)
- posted by cjb @ 8:04 PM 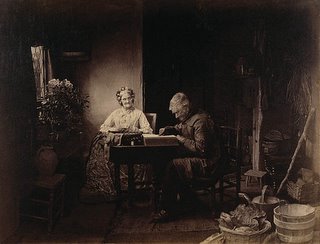 Or to approach the problem from a slightly different angle, consider Harold Bloom's notion of the "anxiety of influence." The cumulative impact of all those collections of black and white photography in the side office -- Atget; Hill & Adamson; Winogrand; Evans; the Bechers; Friedlander; Fox Talbot; Julia Margaret Cameron; Nadar & etc. -- could only result in sweats and shaky hands. It's just like the Web, in miniature! Any approach I could conceive of has already been anticipated, and thoroughly explored with more panache than I could ever hope to bring to the proceedings.

(For the record, conceptual art feels similarly overdetermined to me, largely due to the plethora of catalogs raisonne and retrospectives pouring in over the transom, which make the movement transparent to me in ways that it probably wasn't to those artists lucky enough to experience it firsthand).

Color photography, on the other hand, particularly digital color photography, still seems open-ended enough to work with. That Evans Polaroids catalog really feels like the dictionary: an embarrassment of riches, just waiting to be picked up and transformed. And like Baudelaire says (cranky old Baudelaire, who hated photography so profoundly that his criticisms of it remain truly up-to-date) the world is a dictionary too. 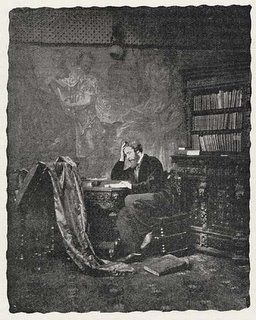 "Bookseller Henry Peach Robinson taught himself photography by using the instructions written by Dr. Hugh Diamond in the 'Journal of the Photographic Society.' In 1857, he abandoned his career to open up a photographic studio that specialized in portraits. Robinson made combination prints that joined multiple negatives to form a single image."
- posted by cjb @ 11:57 PM 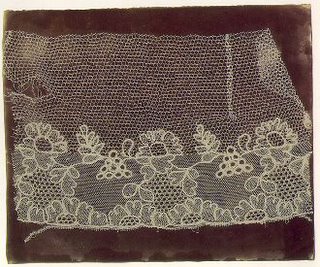 And Your Problem With Black and White Photography is...?

Well, first off, I'm speaking not with my critic/historian hat on, but as someone making images.

My inveighing against black and white pictures wasn't meant to extend to every practicing photographer, just to me, personally. It's a kind of "rule" I was surprised to find myself telling myself I had to obey. As a critic I like and admire artists such as Hill & Adamson, Friedlander, Evans & etc. But my sense of whole categories of B&W imagery being available, "readymade," makes me think that if I'm to make pictures that don't look too much like someone else's, then I should probably stay away from B&W.

Plus, I can't print to save my life, can't compose through a viewfinder, and have zero interest in Zone System style tech talk. Again, these prejudices are particular to me, but they guide and direct me toward the "realism" of (unfiltered or digitally unmodified) color, and away from the "abstraction" of B&W.

(For the record, my picture-making hat also tells me that digital modifications of contrast, light levels, etc., like those characterizing the accomplished work of my friend Scott McFarland, are off-limits to me, but that digital manipulation of an image's composition (eg., Henry Peach Robinson-style combinations of multiple exposures into a single seamless image) is perfectly OK. Why this is I don't know.) 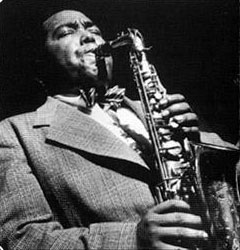 "Max Roach told me that one night, when they asked Parker how they could be like him, he offered his disciples this analogy: He said, 'My cup runneth over. You take this glass of water here. The empty glass is you. Water is musical knowledge. When the glass is full, to the very top, all you have to do is just blow at it and it runneth over. Ideas just gush out of you. But it takes time to fill your cup.'"
- posted by cjb @ 8:48 PM 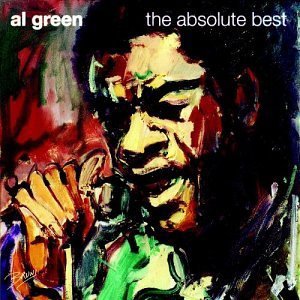 "I'm trying, this feeling just won't die,
oh, sha la la la-- la la la, make you cry,
it's something that just gets down in your bones, baby,
and once I see you I can't leave your love alone..."

If I had to leave tonight for Nevada with only one disc in the car, this is the one I'd take. 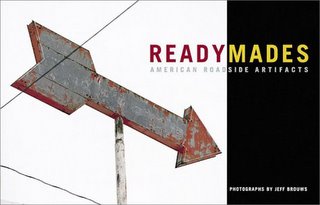