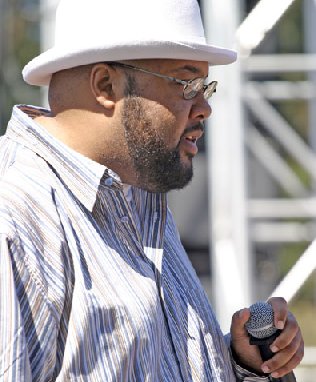 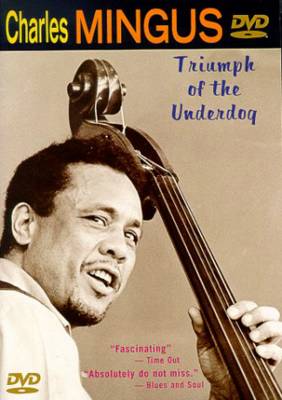 Mr. M. himself, from his "Open Letter to Miles Davis":

"Miles, don't you remember that 'Mingus Fingers' was written in 1945 when I was a youngster, 22 years of age, who was studying and doing his damnedest to write in the Ellington tradition? Miles, that was 10 years ago when I weighed 185. Those clothes are worn and don't fit me anymore. I'm a man; I weigh 215; I think my own way. I don't think like you and my music isn't meant just for the patting of feet and going down backs. When and if I feel gay and carefree, I write or play that way-or when I'm happy, or depressed, even.

Just because I'm playing jazz I don't forget about me. I play or write me the way I feel through jazz, or whatever. Music is, or was, a language of the emotions. If someone has been escaping reality, I don't expect him to dig my music, and I would begin to worry about my writing if such a person began to really like it. My music is alive and it's about the living and the dead, about good and evil. It's angry yet it's real because it knows it's angry."

More bricklaying, drawing equally on Geoff Dyer's terrific account of Mingus' life in But Beautiful, Mingus' autobiography, Beneath the Underdog, which I, unlike Dyer, found compulsively readable, the composer's notes to Blues and Roots, and Booker Ervin's searing solo on "Wednesday Night Prayer Meeting."

Strong fingers,
hands that,
clenched, punched
Jimmy Knepper in
the gut, then broke his
fucking jaw. The
incendiary bassist's
face tight with rage,
leaning in, almost
spitting, calling Sy
Johnson useless
white motherfucker.
And meaning it. Or
shouting, his strong
'voice cracking like a
whip over the backs
of horses.' Saying, Talk
about it. Talk about
it. Yah. Yah. Yah.

Or composed, in Knep-
per's courtroom, gesturing
as if still on stage. Saying,
Don't call me a jazz
musician. To me the
word 'jazz' means nig-
ger, discrimination, second-
class citizenship, the whole
back-of-the-bus bit. Knep-
per shrugging, embarassed
in the witness box, 'missing
him already.'

The Charles Mingus Band in
flight. Ervin's tenor
ascending, like fencepost
steam on the road to church
Mingus walked down as a
child. McLean and Handy
in dialogue together, the bassist
pacing just ahead the others,
his concentration shaped
to 'a pitch of volatility' no
longer distinguishing
between provoking and
reacting. Saying, The
congregation gives their
testimonial before the Lord,
confess their sins and
shout and do a little
Holy Rolling. Saying,
they call their dialogue
talking in tongues or talking
unknown tongue.

Field notes or scales, take your pick. Nothing really much to see here, just bricklaying:

Rotting ties kicked
in & splintered, like the
nailed-up boards
behind the tower's
cracked windows. Birds
racketing inside its
corrugated walls,
grey metal furred
with eavestrough
slime.

The creased grey sea, foam-flecked, low dark lines of distant peninsulas and islands. Barges; a white sail heeling with the wind; the express hydrofoil arrowing straight for Vancouver, the city invisible behind a grey screen of rain and cloud.

Hot sunlight on my face.

Mist streaming from cloud-edges as if from a wet road or fencepost.

"He wasn't cut out to be an entrepreneur: he was the kind of man who, when reaching for the phone, would knock a cup of coffee off the edge of the desk and into an open drawer, thereby ensuring not only that any documents that were in the drawer were ruined but also that the first thing a caller heard was not a pleasant voice saying 'Hello, can I help you?' but Mingus yelling 'Shit!'"

The recognition that every object depicted in [Evan] Lee's photographs is a symbol of something else. Criticism thus consists of acknowledging what is physically present in the images (cardboard boxes; ginseng roots; draughtsman's tools; spilled glitter and confetti) and what is not (galaxies; exotic birds; predatory cartoon faces).

"The dark earth is the mirror of the star-strewn sky." [Foucault]

"There rolls the deep where grew the tree.
O earth, what changes hast thou seen!
There where the long street roars, hath been
The stillness of the central sea."

"It's now time for all vehicle passengers to return to the vehicle deck."

(Thanks to South Wellington's Daph, Pete & the cats for hospitality, Moomin merch and the E&N railtracks. 15+ miles of hiking from Departure Bay to Duke Point, 40-odd pounds of used books on my back).
- posted by cjb @ 9:02 PM

"'And what are you writing about now?' People and seabirds. Of the visible and sub-visible world there is no end."
- posted by cjb @ 4:34 PM

About Being a Student

Uncommonly good advice from Mr. Julian Schnabel, a filmmaker and "painter" that I usually don't have much time for:

"Never listen to anybody when it comes to being responsible for your own paintings. It's a mistake for young artists to want to please older ones. They're going to make you take out of your paintings the very things that most characterize them as yours. You might think that someone is smarter than you are, or wiser, or more experienced, and they may be. But you can't listen to them because nobody knows better than you what you need to do. Most older artists are going to try to get you to conform to the standards that you are out to destroy anyway."

(This from a massive Schnabel vanity press-cum-retrospective catalog in across the shop desk yesterday evening. Full of interchangable mixed-media paintings, and witty and insightful gossip about the 80s Manhattan artworld, including a particularly restrained and moving account of bumping into an elderly but no less opinionated Clement Greenberg in an LAX departure lounge).
- posted by cjb @ 1:52 PM