Happy Pagan Winter Festival to all of you. Xmas day with family, John Latta poems & good dark beer. Back Boxing Day. If you're in the neighborhood, 50% off most everything from 10 until noon, 30% thereafter until close.

Early Christmas gifts in the mail:

--Roadbed, With a Damaged Hand, all flurrying drums and keyboard bridges 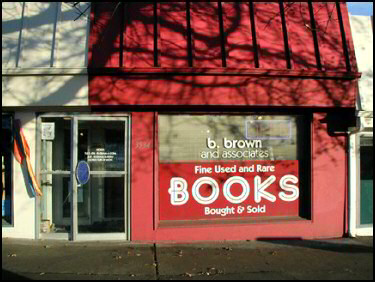 Bob Brown & Associates, a Seattle-based SF, fantasy and mystery specialist whose shop I had somehow never set foot in until yesterday afternoon. "Deep in the savage heart of Wallingford," and just around the corner from Gasworks Park. Looming silhouettes of pipes and tanking, equal parts Ed Burtynsky and Terry Gilliam, in the foggy December twilight. Echoing rumble of traffic across the bridges framing the park on either side. Snowy clouds of circling pigeons.

Off to Seattle in the morning with Gavin, in search of KMD discs, signed American firsts, and tasty Mexican food. Back late.

Browsing the competition's stacks this evening was rudely interrupted by the gruesome Ms. Murray, the former Provincial Minister for Water, Land and Air Protection, widely regarded as the most hapless and ineffective member of the Campbell government.

Honourable Joyce was busy mainstreeting, dispensing little pearls: "a brand-new day in British Columbia," "fiscal house in order," "our opponents the unions," yadda yadda yadda. She also managed to describe herself, in a breathtaking display of doublespeak, as "a fiscal conservative...and an environmentalist."

Not quite. Just your typical garden-variety B.C. politician, talking out of both sides of her mouth simultaneously. As Minister of Water, Land and Air Protection, Joyce presided over the politically motivated removal of Fraser Valley water quality protection staff from the ministry. Groundwater contamination by dairy farmers is now virtually assured, as this well-researched article by Georgia Staight investigative reporter Ben Parfitt makes clear.

Hopefully New Westminster voters will have the good sense to throw useless Joyce out of office sooner rather than later.

(Disclaimer: I am a small business owner, not a tool of the BCGEU, as Hon. Joyce charged in a short and fairly acrimonious exchange. I vote center-left on most issues, and would consequently never dream of voting for the Campbell "liberals", whose dangerous and short-sighted neoconservative policies have done more damage to me, my family, friends and customers than any other provincial political group, ever).

Spectacular skyscape this morning, the city caught in a rift between two storm fronts, and sunrise bright and gold below the massed dark clouds.

Last week before Christmas, the phone ringing off the hook with folks looking for less-than-plausible last minute gifts. An example? That call that I take every year:

"Can you tell me what signed Lord of the Rings books you have in right now?"

Different voice every time, so I know it's not just a friend trying to wind me up.

Reading (in those brief intervals between work and work) David Adams Richards' Mirimachi trilogy, and the Norman Dubie collection that arrived in the mail last week.