"People now tend to think their experience of art is based in understanding the art, whereas in the past people in general understood the art and were maybe more freely able to absorb it intuitively. They understood it because it hadn’t yet separated itself off from the mainstream of culture the way modern art had to do. So I guess it is not surprising that, since that separation has occurred, people try to bridge it through understanding the oddness of the various new art forms. Cinema seems more or less still in the mainstream, as if it never had a ‘secession’ of modern or modernist artists against that mainstream. So people don’t tend to be so emphatic about understanding films, they tend to enjoy them and evaluate them: great, good, not so good, two thumbs up, etc. Although that can be perfunctory and dull, it may be a better form of response. Experience and evaluation – judgment – are richer responses than gestures of understanding or interpretation."
- posted by cjb @ 9:46 PM

The Baldwin/Cooper line on the Chief's Grand Wall, and a few pictures from the route (click on the "Images" link at the top of the page), for those who asked. 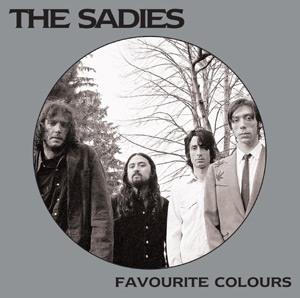 The Sadies -- greatest Canadian faux-psychedelic country-and-western-cum-spaghetti-western-soundtrack ever. Tonight, @ the Brickyard!

(Update: actually the 26th of November, not tonight) 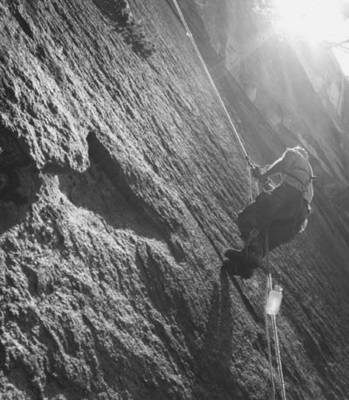 To the Ridge with SGB last night, to catch the winners of the Vancouver International Mountain Film Festival, and, in particular, Ivan Heck's and Angela Hughes' In The Shadow of the Chief, a documentary about Jim Baldwin's and Ed Cooper's 1961 seige of the Grand Wall. Lots of black and white CBC footage of the intrepid pair, clearly out of their social depth with cars piling up below them on the highway and the whole town of Squamish keeping tabs via telescopes and long-distance lenses. Some astonishing present-day footage, too; Hamish Fraser free-soloing the Split Pillar (a thousand feet of air below, the tops of the alders above the highest boulder field swaying in the wind, like warm green waves), or two climbers, youngish guides whose names I didn't catch, making a modern ascent of the present-day route. Video lets you get very close to your subject, in a way that film's bulky apparatus seldom seems to, with the surprising result that things that I remember from my own time climbing -- on admittedly much easier routes -- suddenly reappear blown up and magnified, on screen. The blood from the cuts on your hands which chalk helps staunch but never stops entirely. The sewing machine leg that starts trembling uncontrollably and won't quit. The hand that comes loose, and the dizzying sensation of starting to peel from the face, just in time to holler, "Falling..." 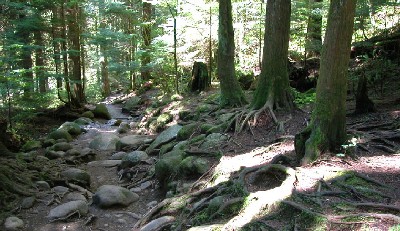 A few mental health days off.

Yesterday, a 13km hike from Deep Cove to the Lynn Canyon suspension bridge and the bus back to Lonsdale Quay. Sunshine for the first hour, relentlessly switchbacking up to a granite bluff above Deep Cove and Indian River Drive, growing steadily more overcast as the day went on. Clabbered sky. Rosy russula emeticas in the duff on the forest floor, and orangey-yellow woolly pine spikes, which I mistook at first for winter chanterelles. Steep descent down the western slopes of Mount Seymour, then across the little-known Seymour River canyon on the pipeline bridge, churning green-white water below, spray lifting up the sides of the cliffs. Precarious ferns! Up the world's steepest set of stairs to the Demonstration Forest access road, then down again to Lynn Creek. A fogbank drifting right above the canyon, which I sank down through approaching creek level, feet first, sweaty torso next, and finally bald and sweaty head.

On Granville Mall this morning en route to the bus stop, trying to simultaneously read Barron's magazine and drink my decaf. Walked right into a young blonde fellow exiting his hotel with all his luggage, in search of the airport bus. Seen-you-somewhere-before glances exchanged all around.

Me: not so many rows back from the front of the stage, and much taller than the surrounding crowd.

One-song repertoire, the theme from the animated Spider-Man series, which wouldn't be so bad, except for the vocals, which lovingly reproduce every tic in Kurt Cobain's live delivery of "All Apologies." Thus: