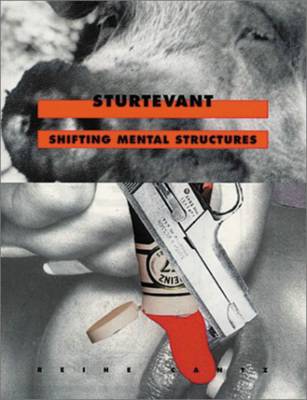 Elaine Sturtevant, the most important of the conceptualists to retain objecthood as an aspect of their practice.  Sturtevant's works are visually indistinguishable from their (mainly Pop Art)  sources, eg., the Warhol Flowers she executed using Warhol's own screens.   Sturtevant's contemporaries have tended to be full-on in their praise until their own works come up for emulation and re-presentation.  I admire Sturtevant's work almost as much as I do Rodney Graham's and Jeff Wall's, but the intellectual basis for this admiration is surprisingly hard to pin down.  Other critics' attempts have devolved fairly quickly into love-ins with Sherrie Levine and Allan McCollum.  Forthcoming essay?  Stay tuned.

US Thrift Store Archetypes, shamelessly copied off the Alibris.com members-only message board:

"(Names abbreviated/changed to protect the innocent): TC: Alleged Viet Nam veteran who rarely bathes, sweats profusely, and wears the remains of his decades-old beret. It looks like a rotting carcass tied precariously around his head. I've been warned that TC is a nice guy who knows books and music, but will "suddenly freak out on you." Speaking of stinky people: Bowel Guy is skinny as a stick, wears glasses that are so big that I'm surprised his body can support them. He's way too concerned about his bowels, and is always talking about the benefits of eating oatmeal. Billy Goat: Buys only Louis Lamour paperbacks. Says he stores all of his books in a storage unit because he's not ready to sell them yet. He's been buying books for years. He won't sell his books online either. Says he doesn't "even own a computer." Guy in Linen Pants: Admits he hoards things, and that he has an OCD for dictionaries. Know-It-All: As a child, he discovered Japanese soldiers hiding in the forest near his home. He has studied magic with a famous magician whose name he can't recall. Actually, he has studied lots of things with lots of famous people, whose names he can't recall. Then there's my favorite: The Book Savior who buys all the really old books to save them from going to the dump. He says he knows he has a problem, and that his friends are starting to doubt his sanity. But I'm glad guys like him exist. Anyway, they are all harmless weirdos--except for TC?--and it's sometimes amusing to talk to them. Wonder what they say about me? Aren't I one of them?"

This is the first US edition.  Grey people carrying clocks under their arms are standing in front of a big red building with a cupola roof.  Behind the building are trees, and, rising above the trees, a moon which is also a clock face.

(Free Pulpfiction gift certificate to the first non-client to correctly name the book in question.  Entries to pulpbook@telus.net) 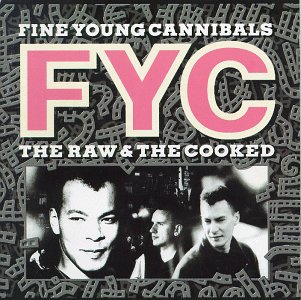 I'm Not The Man I Used to Be -- 20 wonderful seconds of instrumental introduction, just waiting to be pilfered and looped.

Warm summer waves from a Hammond B3, says John. 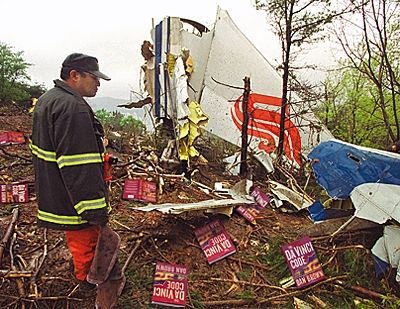 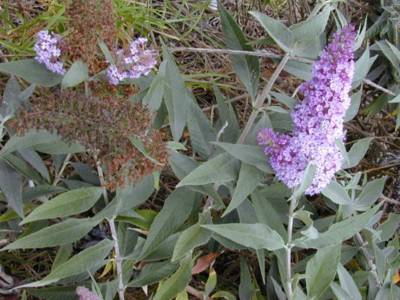 Buddleia Davidii, a.k.a. butterfly bush, a.k.a. an invasive species originally native to China. Now widely dispersed across the Pacific Northwest and likely visible at a road cut or rail line near you. I used to cycle out to my Horseshoe Bay paper route along a decomissioned BCR right-of-way, which, from August to mid-October, was a blizzard of eucalyptus-colored leaves and sweet-smelling mauve cones. We buried some of my grandmother's ashes on a buddleia-studded hillside on Bowen Island overlooking the sea. Big shout out to this gorgeous biological intruder!

A Letter from East Van to Hammertown
(Review of Peter Culley's Hammertown, for the Rain Review)

Sylvia and I took a realtor’s tour of Hammertown last spring, beginning with the cheapest single family home listed on the MLS. Even as we pulled up in the driveway it was obvious no sale was forthcoming, but the realtor still insisted on walking us through. I recall a worn linoleum floor, unfinished wooden cupboards, an orange shag carpet in the living room, speckled here and there with grey constellations of ash, and, racked upside-down in a drain tray by the sink, pebbled plastic drinking glasses. The owner, a paunchy, middle-aged European, warily trailed us and the realtor through. He’d grown up here. The house had been his mother’s. I glimpsed, embarassed, an older woman’s clothes, protruding like a tongue from a half-open bedroom closet door. Death still a presence, not yet quite gone.

Downstairs, we inspected the basement’s unfinished concrete floor. A door opened out onto the sloping back yard’s gnarled apple trees and rundown greenhouse, its plastic corrugated panes all broken, full of gaping holes. I stopped. Abruptly thought of you. I’m still not sure which detail did it – the scattered black pots, full of woody geraniums and fuchsias? The telephone wires and bare black trees, crisscrossed in the lane, so much like some of the little photographs punctuating Snake Eyes? The pale March light above the islands? Maybe it is more truthful to say it was a conjunction of these things, the informe of the plant pots’ dessicated contents and the distant light inflecting each other, waltzing together like partners at a dance.

We drove around in the realtor’s SUV with her commentary ringing in our ears. That’s a grow-up. That one, too. There, the local Angels club house. And that? A revenue property -- ex-grow-op -- she purchased for her son. We topped a rise and gazed down upon a hollow full of rundown homes, a Vancouver Island Arkham. I thought again of you, and that E.J. Hughes Cowichan Valley landscape we both admire. & too – your Guston epigraph. “[A] sort of scrimmage is taking place – arms, discs, etc., the abstract forces are trying to pile themselves up into a permananent mound – BUT – a hammer looming in from the top-side is definitely hitting this structure, making it seem as if it is crumbling, collapsing.” The vista spread before us looked to me like Guston had gotten hold of that Hughes landscape and aggressively reworked it, canting the roofs and chimney pots in at weird, non-Euclidian angles. For a moment I was unsure of what I was really seeing, old suburban Nanaimo, or Hammertown’s strange streets. A full-scale ontological breakdown, precipitated by you. Thanks!

So, no structures then, or only provisional ones. Nothing really surprising there, just orthodox modernism ticking quietly along. These fragments I have shored against my ruins. But that’s not quite right either. Your quotations are way too abrupt for high modernism, eg., the snippet of Shelley's Epipsychidion dropped abruptly into Greetings From Hammertown. The sample? source? retains its own integrity, is not absorbed into the structure of the whole. The “permanent mound” of the poem is indivisible from the units that constitute it, the sample sources laid one atop the other, the heaved and twisted strata of history, politics, and other people’s texts. Style as geologic upheaval, or continental drift. Bob Smithson would be proud.

Your contexts, regional or otherwise? Smithson certainly, Blaser, Spicer, Stanley & their antecedents: Olson, Creeley, Ed Dorn. Maybe Avison. Basil B. Wee bits of the tish gang too, mainly Marlatt and Bowering, and even then present not so much in poetic structure as in tone, like those supercompressed tag lines Davis played live at the Plugged Nickel.

As for some of your local contemporaries, a phrase of David Mamet’s comes to mind: “A generation that would like to stay in school.” I have never understood why so many intellectually accomplished members of the working class would want to organize – even temporarily – as a school or movement. Bad memories of reading groups at UBC, little clusters of folks trying to puzzle out poems with the help of lots of dope and wine, the genteel what-is-this-guy-trying-to-say equanimity that eventually drove me right out of academia all together. All through my chequered grad school career I felt like the guy in Gin & Lime: “Throw off / like dirty clothes / this useless life / I’ve come to love, seeing / how / for so long / I’ve avoided / the inability / to say anything / that does not add to confusion.”

I’m old enough now to no longer want to read academic papers about poems, or to write them, or to convene seminars and conferences to discuss them. Old enough and foolish enough to believe that poetry principally composed as an object of analysis is ethically suspect, and that a real test of a poem's worth resides in its dailiness, the ways it speaks outside the confines of purely aesthetic or critical inquiry. & because of this, your poems have been valuable to me.

Valuable how? Start with that index, the big one that overshadows everything else in A Letter From Hammertown, “a kind of recording scrim, on which / the successive domed apprehensions / of the April sky, the / broiling surface tension of Dodd Narrows, etc. / can be decelerated and examined –“ A structure patterned on Richter’s Atlas or Perec’s User’s Manual, an form big enough to frame the world, but not to mirror it, not exactly. “I’m lining things up / all in a little row / so that the real image of spring / and the mental image of spring / can be made to somehow agree –“ But they never do. Poems and music arise from the tricky slippages between nature and its representations. Miles’ birdcalls, Delia Darbyshire’s unearthly hoots and whistles, DJ Theo Parrish’s repeat excursions into BIG and WIDE – all structures that are like, but not quite, nature. Include Hammertown in their company, too, with all its emulation strategies –- the endless catalogs, taxonomies, and samples. Not a conventional poetic voice but something else entirely, a modest, temporary structure like a tent, something to be erected and disassembled and moved again. A made thing, “not really a holler as much as a bowl, into which sounds enter or leave only with difficulty.”

Not Really "Office Work on the Computer"

Dwelling on Dwell
(verbatim from way-too-heavily annotated copy consigned to the dollar table):

- what is allusion to fish

- what are all the stats? 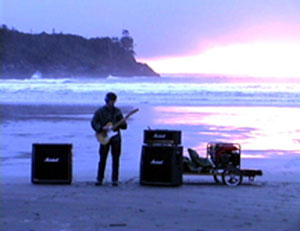 Kevin Schmidt, Long Beach Led Zep (video grab)
Yes there are two paths you can go by, but in the long run, there's still time to change the road you're on...

Lunch with Ken Lum at Ho Tak Kee on Friday.

The downpour that had been threatening all morning finally burst, loud enough to overwhelm the usual kitchen noise. At some point, lightning hit the electrical substation opposite the Western Front. A colossal BANG, then silence.

The lights at Broadway and Kingsway went out. Traffic, barely visible through the foggy window behind the bar-b-q ducks and the heat lamp, backed up, then, when I next checked, was flowing fine again. Had the lights returned?

Out into the storm's aftermath. A civilian stood in the middle of the road, directing traffic: the local nut usually found on the traffic island opposite Kingsgate Mall, pretending he's a traffic cop. Ken and I watched for a while. He was doing a terrific job.
- posted by cjb @ 10:02 AM