"Corporations are people, my friend." 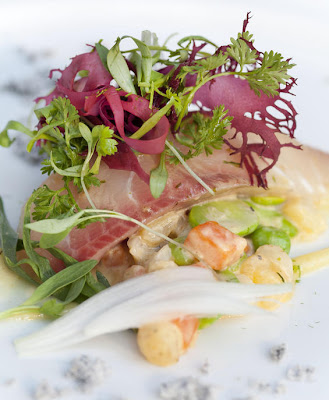 Jonathan Gold, my favorite food critic, reviews Laurent Quenioux's run at LA's Starry Kitchen, a restaurant (& chef) after my own heart.  The "LA Gastronaut" meal described doesn't really do it for me, though, beaver and bear, however legally and "humanely" sourced, properly belonging to the "octopus and cat" category of non-edibles.

"When the skewers of sauteed lamb sweetbreads came out, they instantly disappeared from the communal platters of crushed peanuts on which they were resting, and I noticed that nobody pushed the roasted duck gizzards and duck hearts away from the endive salad. There was a raw plate of cod eggs, thinly sliced poached monkfish liver, tongues of local uni and a raw quail yolk buried in its shell under fat salmon eggs. The composition was marred only by chewy wisps of undercooked sea cucumber. (Sea cucumber should be served either raw or cooked into full submission.) A stack of bone marrow, calves' feet and rare, seared sea scallop tasted like a marine take on pieds et paquets, dominated by the softness and stickiness of the foot's developed gelatin."