David Brooks gets it, for once:

"Grinds, on the other hand, tend to have started their own company or their own hedge fund. They’re often too awkward to work in a large organization and too intense to work for anybody but themselves.

In finance, as in other realms of business life, social polish doesn’t always go with capitalist success. Often it is the most narrow, intense, awkward people who start the best companies, employ the most people and create the most value.

[M]aybe the real issue is how we are going to light a fire under the country’s loners, its contrarians and its narrow, ambitious outsiders."
- posted by cjb @ 7:39 PM

Recent reading, the good stuff in red as usual:

This morning's best customer -- the Croat mom who just special-ordered Pohl and Kornbluth's The Space Merchants -- "I read [it], in elementary school, in my country!" -- tries to coax her little kids, boy and girl, back into the double stroller: "Okay! Cookies! Places please!"
- posted by cjb @ 12:03 PM 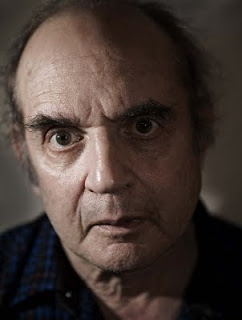 There's a short story in one of the American Splendor collections called, "I'll Be Forty-Three on Friday (How I'm Living Now)," in which Pekar simply wanders through a Cleveland park in summer, reflecting on his life, while moving from patches of sun to full shadow and back again. Reading this story, probably twenty years ago now, permanently altered my life. I never would have found Raymond Carver without it, or Chekhov, Tolstoy, Flaubert, and, through them, the kind of art we call "realist" (Courbet; Degas; Manet; Cezanne; Rackstraw Downes; Fairfield Porter; Stephen Shore; Lee Friedlander; Jeff Wall).

"Vastly underappreciated is the display of values in Pekar’s work, stories that would spotlight someone else’s display of virtue and his hearty endorsement of it -- acts of friendship or generosity, a session of intense conversation, small kindnesses." (Courtesy my friend and former editor at The Comics Journal, Tom Spurgeon)
- posted by cjb @ 9:27 AM
Sunday, July 11, 2010 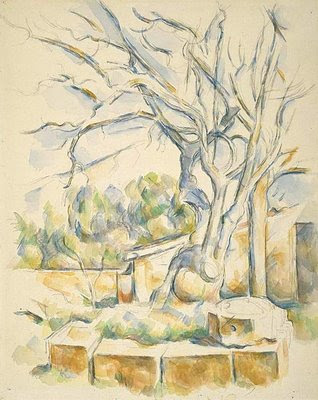 A Wonderful Reserve, by Robert Linsley. As freeing, in its own way, as Linsley's lecture out at UBC this spring.

"I can’t overstate the shock I felt when I opened Simms’s Cézanne’s Watercolors (published by Yale University Press in 2008), which again features copious details and close-up photographs, to find a very competent academic drawing from Cézanne’s youth. This one reproduction is worth the price of the book. The shock of Cézanne’s academic drawing is the realization that he made a choice—that there was nothing to stop him from following the path of a Degas or a Fantin-Latour; he had the skill. He also had the wit to see that there was no point in going that way, and so he took a different path. He had a choice, and he took a risk. The risk was maybe a greater one than most of his contemporaries were willing to take, but it paid off commensurately because he changed history, thereby ensuring his place within it. What Shiff has shown is that the same risk was available to anyone, that it was within the range of recognized possibilities at that time."

"Most of the essays in the Philadelphia catalogue that address Cézanne’s successors stick to the conventional modernist line—that Cézanne’s work led the way to a self-referential art of painted surfaces. But while such a mainstream position might do justice to Brice Marden, Ellsworth Kelly and Jasper Johns, it doesn’t apply well to four of the most recent artists included: Luc Tuymans, Francis Alÿs, Jeff Wall and Sherrie Levine, all of whom are definitely postmodernist. Since the theme of the show is Cézanne’s continuing relevance, this component should be the most important, and yet of two reviews that I’ve seen, one in the New York Review of Books and the other in Artforum, only the latter has anything to say about these four, and Jeff Wall is mentioned only in passing. Because Wall’s work does nothing but reference Cézanne’s imagery, its engagement with the master is apparently superficial. I think that a more nuanced reading is called for.

Wall’s piece Card [P]layers is an obvious citation of Cézanne’s late series on the same theme, but his treatment of it is completely different. In the art and literature of the 19th century, provincial life appears narrow, dull and oppressive, and I think that Cézanne, an artist who chose to stay in the provinces, who made a virtue out of provinciality, really did capture the suffocating dead air of provincial life. The card players are the most inert people, engaged in the most boring pastime—at least the most boring pastime to watch. I’ve never been convinced by the claim that uninteresting subjects are redeemed by brilliant paint handling, but in any case, in my view the card-player works are not his best paintings—the surprising conclusion is that in Cézanne’s work the style matches the subject. It seems that the arch-modernist is literary in a very unmodernist way. The result is an irony that may be Cézanne’s most profound response to the work of his older contemporary Édouard Manet. The irony of Manet’s great works of the 1860s, such as Le déjeuner sur l’herbe, is the incongruity of historical art and contemporary life. Cézanne has transformed this into another irony, one as prophetic of Warholian blankness as of the furthest reductions of 20th-century abstraction, namely the utter incompatibility of the people depicted in the work and the people who will be its viewers. The flat quality of his painting leaves those sophisticated viewers no place to retreat to in search of aesthetic satisfactions.

Wall belongs to a different realist tradition, one in which the most banal details of everyday life have intrinsic interest; there is no such thing as an uninteresting detail, and no mask is only a mask: there is always a story behind it. Wall is in the company of those great realists who have expanded the scope of art by rescuing the ordinary for aesthetic contemplation. But since the universe so presented is a continuum from the grain of dust swept out the door to the mountain peak shining in the distance, there can be no irony in its presentation."
- posted by cjb @ 8:32 PM