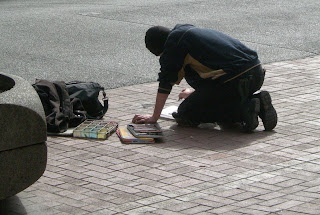 Two wiggers board the Swartz Bay bus behind the Mayfair Mall at twilight. Baggy jeans, New Style caps, neck chains. They swagger down the aisle and collapse into the seats behind me, directly opposite the Native workman who's almost dozing there, chin in hands, elbows on knees, big dirty construction boots unlaced.

-We went to the strip club!, hoots one of the kids.

-The titty bar! Where all the HOOOOOORS are!

The bus driver's eyes flick up to his rear-view mirror.

-Hold it down back there!

-Fuck you, you piece of shit!

-What's he gonna do, stop the bus?

The middle-aged woman seated across the aisle from me closes her book with a snap, stands up, face averted, and makes her way up the swaying aisle.

Elk Lake across the divided highway. Dark trees flashing past. A white pick-up in the parking lot starts up, putting its lights on.

-Remember the bitch at the strip club? I had my face in her tits and I was all, mmmmmmwah!

-John put a bitch's hand on his cock, once. They threw him out.

The guy in the seat in front of me is shaking. His eyes -- darting back, careful not to catch the boys' -- say that he wants to fight but that he's afraid to.

-Look at Tonto there.

-Get off the bus, white.

-What did he say?

-Get off the bus now. White.

-Fuck you! Go back to the fucking reservation!

The native man shrugs forward. He removes his quilted work jacket, his dirty jean jacket, the green undershirt beneath it, revealing his thick brown chest and arms.

-He doesn't know what he's saying. Please man. There's no point. Sit the fuck down Jesse!

The bus grumbles to a stop at the side of the road.

-Jesse get off the motherfucking bus right now!

Moon-faced wigger sways his way to the back door.

-What are y'all fucking looking at?

Wigger #1 steps off. The doors close.

-I want to apologize to you man.

-He, he disprespected you. He doesn't even know you. You're just minding -- minding your own--

-He's my friend. But he's a fucking fool. I apologize.

-It's fucking bullshit! You were just sitting there. He doesn't even fucking know you.

-It's all right boy.

The teen extends his hand. The Native man converts it to a fist-bump.

Constant readers of this page will be pleased to know that Mssrs. Becker and Fagen are touring this summer and fall. Some European dates up now, North America TBA.
- posted by cjb @ 11:00 PM 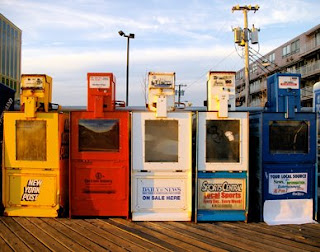 Germane to my disagreements with Barbara Yaffe and Canadian print media in general this morning: Clay Shirky's excellent Newspapers and Thinking the Unthinkable.

Shirky: "[T]he work of print journalists is used by everyone from politicians to district attorneys to talk radio hosts to bloggers. The newspaper people often note that newspapers benefit society as a whole. This is true, but irrelevant to the problem at hand; 'You’re gonna miss us when we’re gone!' has never been much of a business model."

In a related post on his site, Shirky correctly notes that micropayments for content are never going to work:

"The essential thing to understand about small payments is that users don’t like being nickel-and-dimed. We have the phrase ‘nickel-and-dimed’ because this dislike is both general and strong. The result is that small payment systems don’t survive contact with online markets, because we express our hatred of small payments by switching to alternatives, whether supported by subscription or subsidy.

The other key piece of background isn’t about small payments themselves, but about the conversation. Such systems solve no problem the user has, and offer no service we want. As a result, conversations about small payments take place entirely among content providers, never involving us, the people who will ostensibly be funding these transactions. The conversation about small payments is also not a normal part of the conversation among publishers. Instead, the word ‘micropayment’ is a trope for desperation, entering the vernacular of a given media market only after threats to older models become visibly dire (as with the failed attempts to adopt small payments for webzines in the late ’90s, or for solo content like web comics and blogs earlier in this decade.)"Case in point: the Globe's requirement to pay for dated content. Let's take a paragraph from a random article hidden behind the Globe's paywall, in this case an op-ed column by Leah McLaren:

"I am kneeling on my living room floor and lifting my leg like a dog about to pee. Now imagine that the dog was suffering from hyperactivity, a puffy red face and acute shortness of breath and you're starting to get a picture of what I look like. Not that I care. I am in the process of changing my body, you see. If I keep doing this exercise, over and over again, for a sizable portion of the rest of my adult life, I, too, will have a teeny tiny celebrity body - minus the spray tan and Botox, which, I understand, cost extra."

The Globe wants $4.95 and tax for access to this article's remaining 850-odd words for 30 days. I think the chance of me -- hell, anyone -- paying to access Leah McLaren's typing is approximately slim/nil. But Canadian print media keeps serving up breathy, brainless op-ed columns like McLaren's, while steadily marginalizing the work of more accomplished writers (Stephanie Nolen; David Baines; Frances Bula & etc.). In the old news model, my only option is to write a letter of protest about McLaren's drivel to the Globe, because they're the only real newspaper of record in Canada -- what am I going to do, switch to the Post? -- and I have to hold my nose and choke down whatever their editorial judgment serves up. Leah McLaren probably gets a raise, because my letter implies "controversy," which sells papers. But in the new news model, I can short-circuit the Globe's editorial judgment all together by referring to an impressive array of constantly updated amateur and professional sites that have one thing in common: they address me as a concerned citizen, and not as a consumer, best-ever gal pal, or child.
- posted by cjb @ 5:48 PM 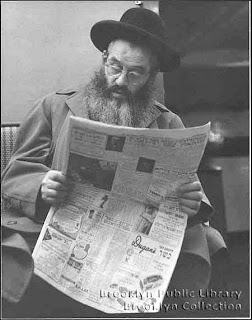 Every columnist in the mainstream media wants me to lament the impending death of newspapers. Canwest's whiny self-serving Barbara Yaffe even wants me to pay her salary:

"Television production groups last month argued before the Canadian Radio-television and Telecommunications Commission that the regulator ought to introduce a levy on Internet service providers -- such as Shaw or Rogers -- whereby three per cent of revenues would go to a fund to support the creation of Canadian online programming.

The same sort of idea could produce a revenue flow for newspapers."

This assertion is so breathtaking in its arrogance, it's hard to know where to begin refuting it. But start with the premise that newspapers, at least the current models, still provide useful information to readers. The Southam-owned Vancouver Sun did at one point. In high school, and even on into university, I delivered the Sun, and read it cover-to-cover every day. Columnists like Frances Bula, Kim Bolan, Lee Bacchus, John Mackie and John Armstrong educated me about how the world worked; through their skill in reporting on crime, or civic affairs, or music, books and television, I found my taste expanded. Nowadays the Sun is firmly in the grip of folks like Yaffe, Harvey Enchin, Shelley Fralic & etc., who all write in a clumsy Canwest house style that reminds me of grade-school reader-ese, the most offensive aspect of which is its conversion of everyone to "we." We're pulling for the Olympics! We're worried about crime! We're buying a house in the 'burbs! We're concerned about government intervention in the free market! We're frightened by media's grip on our kids! & etc.

What I take from Canwest's house style, and from the collapse of Canadian print media in general, is its assumption that its readership doesn't get out much, and doesn't have alternatives to what's presented in its pages. I say this as a former journalist. In the 1980s and 1990s, I wrote semi-regularly for the North Shore News, the Vancouver Courier, and the Georgia Straight, and occasionally for the Sun. My early experiences with print media were positive: editors were enthusiastic about the work, printed my pieces more or less exactly as submitted, and steadily requested more work from me. Midway through the 1990s, word counts started to fall, and editors began making nit-picky intrusions, asking me to simplify details that weren't hard to begin with. Two examples spring to mind:

EDITOR: Who's this "Warhol" you refer to?

E: Do you mean Andy Warhol?

E: Better say so! Otherwise a reader might get confused.

SAME EDITOR: Now, in this paragraph, you use the word "abstraction."

SE: Is there a simpler phrase you can use, instead of academic jargon?

People still ask why I quit writing newspaper criticism. When I started at the Straight, art reviews were 1000 words, and the paper printed one or two reviews each week. When I left five years later, reviews, even of group shows, were 500 words maximum. List every participating artist in a six artist group show, name the venue and the relevant dates and what remains of a 500 word review reads like Donald Judd: "John Smith shows a picture. It's square and green."

Strangely, readers never wrote to complain about my conceptual impenetrability. (They did regularly complain about the soundness of my judgments). The only people who had stylistic complaints were newspaper marketing departments, who repeatedly explained that people had a hard time reading more than 500 words at a go, which would probably have surprised journalists like Orwell and Liebling and Twain.

Canwest and the Globe are currently producing products that no one wants to buy, linguistic SUVs instead of smart cars.
- posted by cjb @ 11:34 AM