A paragraph I really wish I'd written. Courtesy Uncle Zip.

"Twelve minutes past six it rains once, very quickly & heavily; but the garden bench is left dry except for the horizontal slats, which, slicked & mirrored, reflect the clouds. The whole garden is in light again. It’s a grey light. The garden wall, swagged with ivy and clematis, bowed under the weight of them & of the quince, looks like a tranquil graveyard just after rain. You’re being shown something. The thunder – which passes quickly into the distance, where it stays – is telling you something about what was never here, the gap you were already trying to fill. The light, decades old, issued from another garden. It spent many years arriving here with its meaningless postcard message, 'Wish I was there.' In a minute you won’t even be the person who received it. The thunder will crawl off east, people will start coming home from work, or going away for the weekend. They’ll slam car doors."
- posted by cjb @ 8:34 PM 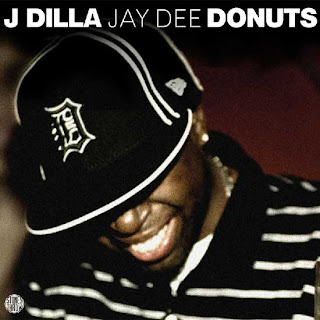 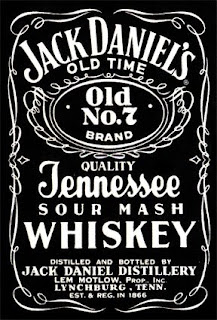 Sight Reading -- bookstore fun, slow rainy Saturday afternoon. "If Dan Brown was music, what kind of music would he be?"

Voices From the Street 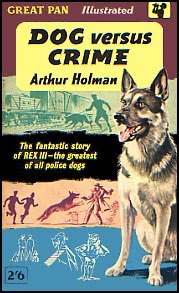 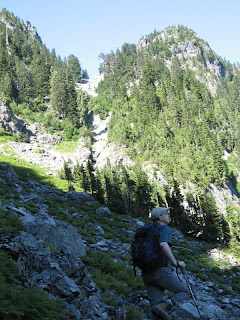 The author in the field. Approach route more or less dead center to the col. Photo: MOW.
- posted by cjb @ 8:39 PM 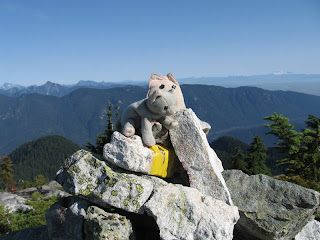 "Total time of trip was 9 hours, 45 minutes including numerous breaks, a couple of naps, lounging at the summit and a mellow pace. Over the course of the day, I lost track of the number of times I heard 'almost there,' 'just like, 10 more minutes,' and 'this'll be easy,' none of which I believed for a second. So CJB's enthusiasm wasn't infectious, but I appreciated the effort nonetheless."
- posted by cjb @ 8:39 PM

[Clubtread.com members] Team Cat and Mad Owl Woman climbed Runner Peak, just north of Mount Seymour, yesterday, on what was possibly a perfect day. Blue sky, warm temperatures, awesome views of the Five Fingers Group, Judge Howay, etc., and, alas, active swarms of assorted biting and stinging insects. Sam said she'd write up a trip report in the not-too-distant future, but asked me to put together some directions and observations about how we actually went about it. So, here's the Coles Notes version of an involved but not terribly difficult scramble that should appeal to anyone looking for some off-trail travel and 4th class climbing within a few hours of downtown.

Park at the Mount Seymour parking lot. Plug the defunct meter, which will neglect to give you a ticket, or change. Leave a note on your dash.

Start up the ski run as for Seymour. Get lost early on and follow flagging past downed trees and black bear scat off toward De Pencier Bluff. Re-orient yourself and scramble steeply up to rejoin the main Mount Seymour Trail, occupied by 60+ screaming schoolkids and their adult minders. Outwalk the kids along the sidewalk of a trail to reach the Elsay Lake Trail junction at approx. 2.8km from the parking lot.

Descend steeply along the Elsay Lake Trail, by-passing the "express route to Theta Lake" (qv. many previous trip reports). Runner Peak and the east face of Mount Seymour now come clearly into view. Descend Wes' Staircase into the valley, then make your way due W toward the huge gully dropping from the Runner-Seymour col. Lots of boulder-hopping, but no real difficulty. There is a pretty impressive dry creekbed about halfway across this bowl, which, judging by the size of the boulders strewn down it, must work up a pretty good head of steam in season.

At the bottom of the gully, climb easily up rocks along the left hand side of the gully, then enter the gully proper about a third of the way up. Thrash up the gully until it forks. Don't take the left fork, which is full of loose blocks. Instead, head up the right fork, or just right of the right fork, through a few hundred feet of unappetizing pricklebushes and blueberries, which soon brings you to a boulder field. Boulder-hop up to the Seymour-Runner col.

Now head straight up a gully on Runner's S face. This brings you, after a ten minute thrash, to a nice position behind a huge free-standing gendarme. Directly above you is a steep rock face. Scramble up the incredibly textured and friendly rock (low 4th class), heading, in general, up and left. You soon reach a large bush ledge. Walk across the ledge to its eastern edge, stepping around some krummholz with a steep drop below, then double back up some lower-angle bluffs to the wide friendly summit. Don't leave your stuffed friends on the summit cairn and then fall asleep in the sunshine, because a local raven will mistake your friends for dinner and try to make off with them.

Descent: reverse the route. This might be a little unnerving for those without much scrambling experience. If in doubt, go slow, and take advantage of the fifty million holds available on the grippy and excellent rock.

To rejoin civilization, thrash west down the ascent gully to the col, then keep going west until you reach the huge talus field below Runner's south face. Snow lingers here late in the season. Unless you have crampons and an axe, it is a lot easier, not to mention safer, to contour along the S edge of the field until you reach a prominent "boulder gully" dropping in to reach the talus field at its western edge. Scramble straight up the boulders to reach a flagged trail that contours south, then east, steadily gaining elevation and passing several huge mountain hemlock groves. This trail will go on for much longer than you really want it to; comparisons to Crown Pass are not overstated. Eventually you'll reach the Mount Seymour Trail right at the junction between Second and Third Peaks, approx. 4.8km. from the parking lot. Grit your teeth and hammer down to the parking lot as the light runs out of the day, covering the last km. or two in darkness, admiring the full harvest moon.

A great day out, and way more fun than it sounds. Anticipate the cold drink machines in the parking lot being either "Sold Out" or "Out of Service"; stashing a Gatorade or ginger ale in the car in expectation of your return is a not-bad idea.
- posted by cjb @ 4:22 PM 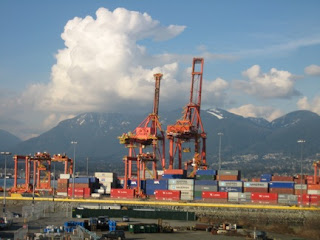 The Second Arrangement
Words and music by Becker/Fagen

Here comes that noise again
Another scrambled message from my last best friend
Something I can dance to
A song with tears in it
Old friends abandon me
It's just the routine politics of jealousy
Someday we'll remember
That one red rose and one last goodbye (one last goodbye)
- posted by cjb @ 4:22 PM
Tuesday, September 16, 2008 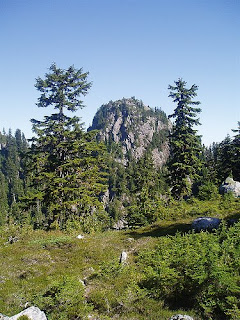 Hungover but largely content, Team Cat heads out into the dusty blue sunshine. 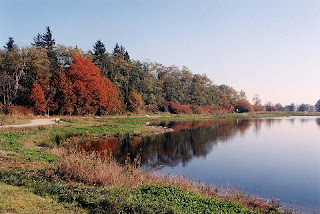 When the dream came
I held my breath
With my eyes closed
I went insane
Like a smoke ring day
When the wind blows
Now I won't be back
Till later on
If I do come back at all
But you know me
And I miss you now.