"He had no particular talent or skill, or what was worse, he had a little talent, some skill: playing the lead in a basement-theatre production of The Dybbuk sponsored by 88 Forsyth House two years ago, his third small role since college, having a short story published in a now-defunct Alphabet City literary rag last year, his fourth in a decade, neither accomplishment leading to anything; and this unsatisfied yearning for validation was starting to make it near impossible for him to sit through a movie or read a book or even case out a new restaurant, all pulled off increasingly by those his age or younger, without wanting to run face-first into a wall."
- posted by cjb @ 9:39 AM Via Craigslist, that most useful of art resources:

"A business without a lightbox is a sign of no business. We can help!

Starting a new venture? You will need bright & attractive Lightbox to make customers come to you. That's why Casino in Las Vegas are blistering with LED Neon and Lightbox Signage. An edge for you to compete. We have two brand new lightbox for sale. Both are 2' x 5' in measurement and can be use for indoor or outdoor. $750. Call Jim at [LOCAL CELL PHONE NUMBER]."
- posted by cjb @ 9:26 AM
Friday, May 16, 2008 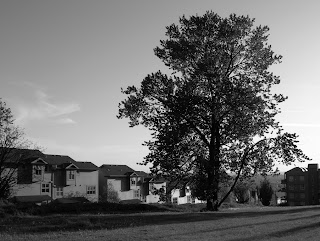 (Slightly Abridged) Letter to the Island

Well shit. I guess I'm pissed but I'll get over it soon enough. I can't change your relationship to your work, or to genre, and I hope that I am an astute enough critic to realize that mailed-in work ends up looking pretty bad in the medium- to long-term, even if it provides short-term consolation. So, no worries there.

Some psychological introspection of my own: I have wanted, since childhood, to make "creative" things full time: short stories, comic books, photographs, etc. Most of these projects don't come to fruition. Collaborative partners disappear, publishers go out of business, friendly editors die. Or "art friends," even good friends, like [BEST YOUNG ARTIST I KNOW] start looking visibly anxious at the thought of more photographs in the room. I was actually entertaining the prospect of "Emily Carr University" the other day -- not because I think it would change anything, but because in the context of being a student I could at least mount a picture on a wall without stressing anyone out or feeling like I was stepping on someone's toes. This has a lot to do with why I haven't sent out photographs or exhibited them upstairs, not because I think people wouldn't like the pictures, but because I think they would be discomfited by the gesture itself, and I have a hard enough time liking my own work without the added pressure-cooker of people hating the gesture (what they might call, if pressed, my "presumption") even before they engage with the objects themselves. That as yet-unmade performance about sleeping on the street outside the "world of art" has something to do with this, too.

I don't like business ownership, investing, economics etc. per se, (at least not as much as I like imaginary talking animals, or Imperial Star Destroyers, or Yoshitoshi's weird conjunctions of realism and the supernatural, or the quiet urban spaces surrounding Jeff Wall's performers) but the world of business does provide consolation in that I don't have to ask for anyone's permission/help/approval to do things; I can just get on with the work at hand and feel slightly more alive. Does that make sense? Probably not, but I appreciate your friendship and really want to see [your] massive [backyard] garden.

My scarlet runner beans have overrun the deck -- already! -- like the tourist-eating plant in The Ruins! -- and the cats are proud, somehow considering themselves responsible for this bright green miracle.
- posted by cjb @ 9:12 AM
Tuesday, May 13, 2008 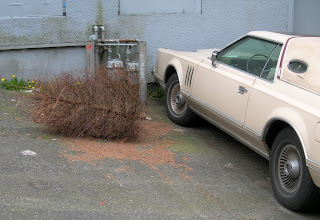 Mother Superior's the only one who calls
She says, "Hey, when are you ever coming over?"
Remove that wretched writing from the wall
It's just more pictures again--
- posted by cjb @ 11:35 PM 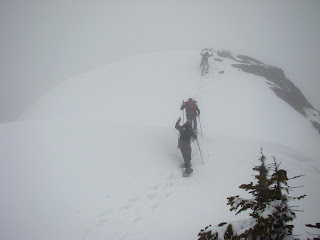 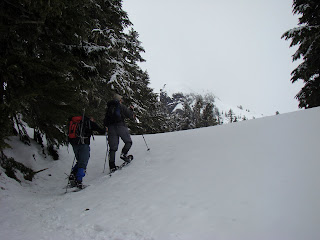 Alpen Mountain materializes after approximately 4 hours of uphill from the car. 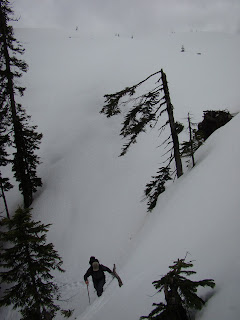 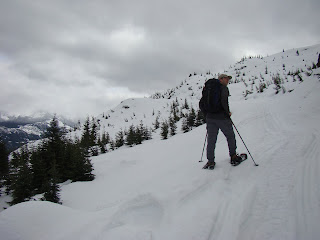 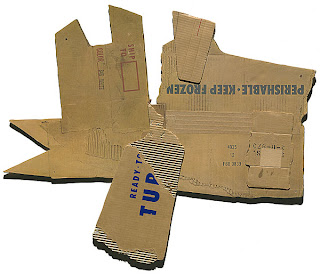 "'Anything you do will be an abuse of somebody else’s aesthetics.'"

"The process — an improvisatory, counterintuitive way of doing things — was always what mattered most to him. 'Screwing things up is a virtue,' he said when he was 74 . . . . 'Being right can stop all the momentum of a very interesting idea.'

This attitude also inclined him, as the painter Jack Tworkov once said, 'to see beyond what others have decided should be the limits of art.'"

"'I wanted something other than what I could make myself and I wanted to use the surprise and the collectiveness and the generosity of finding surprises. And if it wasn't a surprise at first, by the time I got through with it, it was. So the object itself was changed by its context and therefore it became a new thing.'"

"In an interview with critic Calvin Tomkins, Rauschenberg said: 'I had been working for some time at erasing, with the idea that I wanted to create a work of art by that method. Not just by deleting certain lines, you understand, but by erasing the whole thing. Using my own work wasn't satisfactory . . . I realized that it had to be something by someone who everybody agreed was great, and the most logical person for that was de Kooning. . . . [F]inally he gave me a drawing, and I took it home. It wasn't easy, by any means. The drawing was done with a hard line, and it was greasy too, so I had to work very hard on it, using every sort of eraser. But in the end it really worked. I liked the result.'"

"'Beauty is now underfoot wherever we take the trouble to look.'"

"There were many other images of downtrodden and lonely people, rapt in thought; pictures of ancient frescoes, out of focus as if half remembered; photographs of forlorn, neglected sites; bits and pieces of faraway places conveying a kind of nostalgia or remoteness. In bringing these things together, the art implied consolation."

"'The marvel of transposing a fact of nature into its almost complete and vibratory disappearance.'"
- posted by cjb @ 8:46 PM
Monday, May 12, 2008 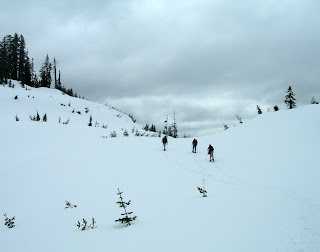 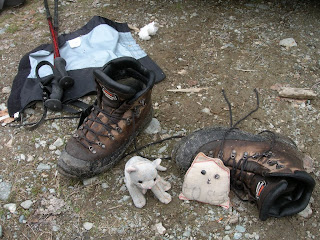 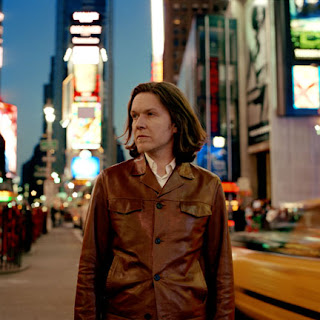 HIPSTER WHO APPARENTLY BOUGHT HIS CLOTHES AT A 4TH AVENUE BOUTIQUE [hands in pockets]: Heeeeey, man, who's that playin'?

HWABHCAA4thAB: Yeah, and he played with Talking Heads.

CJB: You're thinking of Brian Eno. 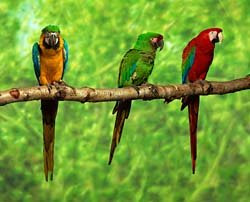 Dapper, soft-spoken George F. Will pauses over Hillary's entitlement mentality. While my father's mother, Louisa Brayshaw, was still alive, back in the early 1980s, brother Dru and I used to spend Sunday morning at her small dim Ambleside apartment, parked in front of her old black-and-white set. Mutual of Omaha's Wild Kingdom was an early favorite, later replaced by ABC's This Week With David Brinkley. Dour old explosively-tempered Sam Donaldson made a significant contribution to what would later be immortalized as my "shopkeeper's persona" (along with co-contributors Basil Fawlty and Bernard Black) but George Will's extemporaneous, perfectly-composed paragraphs impressed me more than I was probably able to admit at the time. Anyone who has ever heard me speak about art from minimal or illegible handwritten notes owes George F. Will some thanks.

"After Tuesday's split decisions in Indiana and North Carolina, Clinton, the Yankee Clipperette, can, and hence eventually will, creatively argue that she is really ahead of Barack Obama, or at any rate she is sort of tied, mathematically or morally or something, in popular votes, or delegates, or some combination of the two, as determined by Fermat's Last Theorem, or something, in states whose names begin with vowels, or maybe consonants, or perhaps some mixture of the two as determined by listening to a recording of the Beach Boys' 'Help Me, Rhonda' played backward, or whatever other formula is most helpful to her, and counting the votes she received in Michigan, where hers was the only contending name on the ballot (her chief rivals, quaintly obeying their party's rules, boycotted the state, which had violated the party's rules for scheduling primaries), and counting the votes she received in Florida, which, like Michigan, was a scofflaw and where no one campaigned, and dividing Obama's delegate advantage in caucus states by pi multiplied by the square root of Yankee Stadium's Zip code.

Or perhaps she wins if Obama's popular vote total is, well, adjusted by counting each African American vote as only three-fifths of a vote. There is precedent, of sorts, for that arithmetic (see the Constitution, Article I, Section 2, before the 14th Amendment).

'We,' says Geoff Garin, a Clinton strategist who possesses the audacity of hopelessness required in that role, 'don't think this is just going to be about some numerical metric.' Mere numbers? Heaven forfend. That is how people speak when numerical metrics -- numbers of popular votes and delegates -- are inconvenient."

My take? Either Hillary or Barack would be preferable to the so-called "independent" Republican now scrambling as fast as he can toward his party's lunatic far-right wing, but Hillary reminds me of many of the ladies (and one particular Chief Librarian) that I worked with at Busy Suburban Library in the late 1980s, folks given to explaining, over and over in stilted management-ese, why "we do things" a certain way, even when those ways contradicted speed or common sense. And Barack? His complaints about the campaign's length seem a little naive -- six months of Hillary snapping at your heels is probably far better training for the Oval Office's demands than a victory lap around the Senate floor, flashbulbs popping -- but his Philadelphia speech made a lot of sense. I watched all forty minutes of it at a Motel 6 in Everett, Washington and was impressed by its complexity and plain-spokenness, two qualities sorely lacking in the vicious spin cycle of modern American politics.
- posted by cjb @ 9:40 AM