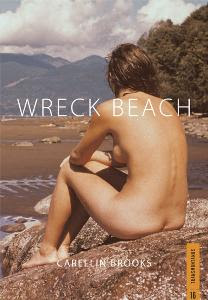 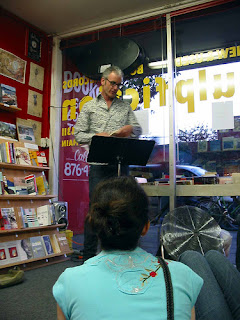 Clint Burnham draws my attention to Mark Wallace's photo of him -- Clint -- reading in Pulpfiction's living room, mid-May, 2007. Note the music stand, swiped overnight from the Anza Club down the road.
- posted by cjb @ 7:14 PM 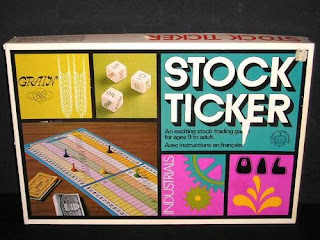 The board game responsible, along with Monopoly, for moulding me into Mr. Hard-Core Value Investor: Copp-Clark's Stock Ticker, which I'd relentlessly badger friends and family into playing.

"The second strategy is more risky, but can also be immensely profitable. It involves buying stocks when they are near the bottom of the board and at risk of being worth nothing."
- posted by cjb @ 4:26 PM 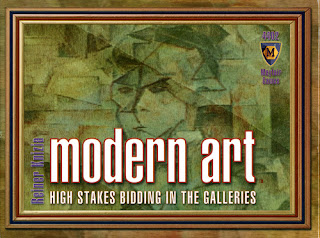 A board game I only wish I owned.

"Buying and selling paintings is a very lucrative business, at least that's what Hollywood's led us to believe, and that's the premise of this game. Five different artists have produced a bunch of paintings, and it's the player's task to be both the buyer and the seller, hopefully making a profit in both roles. He does this by putting a painting from his hand up for auction each turn. He gets the money if some other player buys it, but must pay the bank if he buys it for himself. After each round, paintings are valued by the number of paintings of that type that were sold. The broker with the most cash after four rounds is the winner."
- posted by cjb @ 4:24 PM 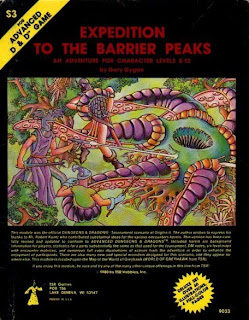 ACT (Aesthetically Claimed Thing): Expedition to the Barrier Peaks (1980). World's best Dungeons & Dragons module, and a great favorite of dru and I.

"Many monsters made their first appearances in Expedition to the Barrier Peaks, including the aurumvorax, froghemoth, and vegepygmy. Additionally, this module features robots and mighty powered weapons such as blaster rifles and laser pistols. This module also contains a fabulous suit of powered armor that allows characters to achieve almost god-like feats (characters have an 18(00) strength while wearing it). Many a Dungeon Master was dismayed to find players with characters wielding these genre-crossing arms, with some of the more conservative DMs (in terms of gameplay) banning them outright outside the confines of the module. Because of these special entities, the module is liberally illustrated to help aid players in understanding their mysterious encounters.

The players will discover that this 'dungeon' consists of part of a downed spacecraft, supposedly its inhabitants having succumbed to some sort of disease and died off. Many of the ship's robots are still functioning, however, and the players must either avoid or defeat them (a few are benign, however, and may be ignored). Wandering police robots and an overzealous weightlifting instructor are just two of the automatons that must be dealt with. One of the module's most curious encounters is a medical robot trying in vain to find a cure for the disease which has already killed off the ship's crew."
- posted by cjb @ 4:05 PM 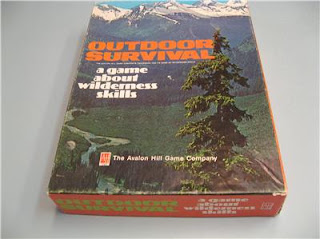 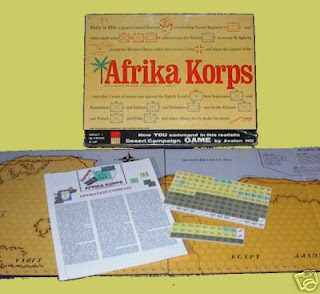 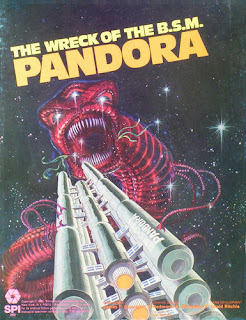 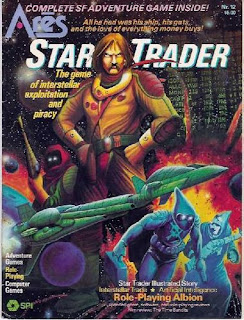 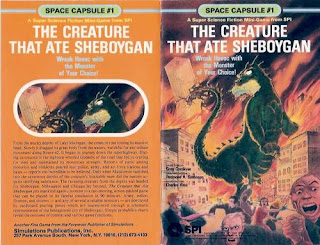 Various simulation games I either played or owned c. 1977-82. Avalon Hill's Outdoor Survival and Afrika Corps are older games from the early 1970s that I discovered on the windowledge of Brian Herrin's Grade 4 Caulfeild Elementary classroom. The other games are SPI titles from the early 1980s, two of which came as inserts in my subscription copies of Ares magazine. Most of these titles didn't really lend themselves to solo play, and the few friends I did have weren't about to spend hours rolling dice and shuffling tiny cardboard counters around on the flimsy paper or cardstock maps. Simulation gaming was thus, for me, an early introduction to the assuming-you're-going-to-have-a-better-time-than-you're-actually-having phenomena that plagues me to this day. By 1984 or so I had a massive collection of games, easily 50 or more, including obscure and virtually unplayable titles like The Plot to Assassinate Hitler and After The Holocaust ("Keynesian macroeconomics after the nukes fall"), whose cardboard counters were carefully stacked in pastel-colored styrofoam egg cartons precariously perched on my bedroom's bookshelves. Common sense only took over in the mid-1980s, as my interests shifted toward hiking, comic book collecting, and prog-rock record accumulating.
- posted by cjb @ 2:54 PM 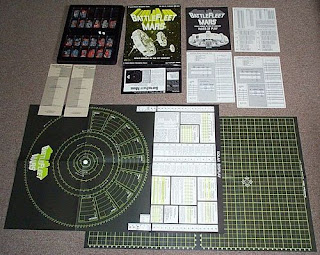 "Simulation of interplanetary conflict in the Solar system during the late 21st century. Earth is dependent on extra-terrestrial resources, the procurement of which is managed, executed, and controlled by privately-owned conglomerates.

The game concerns an attempt by disenchanted employees of the corporation living in space and on Mars to seize the means of production to gain autonomy."

Basic economics, cultural studies, and political theory couched in a tasty science-fiction coating! I loved this game as a kid, laboriously spreading its huge folding maps and hundreds of fiddly cardboard counters across my sloping drafting desk in the den.

BFM wasn't really meant to be played solo, but I grimly toiled through the game's various scenarios, conscious that my invested time felt more like library research than "recreation." Occasionally Charley the cat would hop up onto the desk for a glimpse out the den window, upsetting weeks of work by knocking countless Miners, Catapaults and Transports out of orbit.
- posted by cjb @ 10:34 AM
Thursday, August 23, 2007

"If You're Ever Invited to Give a Reading at Pulpfiction Books, You Should Go"

"Finally, my trip report wouldn't be complete if I didn't mention mangosteens. The mangosteen is an exotic fruit that I've been wanting to try ever since William Poundstone praised it in his book The Ultimate: The Great Armchair Debates Settled Once and for All. Up until last year mangosteens were barred from importation into the U.S. because of fears the shipments would harbor Asian fruit flies. Recently the government began allowing small quantities to be imported from Puerto Rico, but almost all of these mangosteens go directly to gourmet shops in New York City, where they command caviar prices.

In Vancouver, mangosteens are $5 a pound. Chris Brayshaw drew me a map to a store that sold them, and then, when it turned out this is not a fruit you can peel with your bare hands, provided me with a knife, a countertop, and a supply of paper towels.

The mangosteen is the size of a plum, and most of its volume consists of a thick, inedible, and very bitter red rind that will stain like beets if you're not careful. At the center is a cluster of white fruit sections that looks a lot like a peeled head of garlic. The taste is hard to describe, in part because the ripeness varies from section to section and this affects the sweetness, but 'mango with a hint of kiwi' puts you sort of in the ballpark. After years of anticipation, the actual eating experience was a bit of a letdown -- it's not the most delicious fruit I've ever eaten, although it's in the running for most high-maintenance fruit -- but just being able to cross it off my list was a nice bonus to an already great mini-vacation. Many thanks to Pulpfiction Books for making my life a little more full."
- posted by cjb @ 11:27 AM
Tuesday, August 21, 2007

"According to the composer, the Quartet was intended not to be a commentary on the Apocalypse, nor to refer to his own captivity, but to be a kind of musical extension of the Biblical account, and of the concept of the end of Time as the end of past and future and the beginning of eternity. For Messiaen there was also a musical sense to the angel's announcement. His development of a varied and flexible rhythmic system, based in part on ancient Hindu rhythms, came to fruition in the Quartet, where more or less literally Messiaen put an end to the equally measured 'time' of western classical music."
- posted by cjb @ 11:07 AM
Monday, August 20, 2007 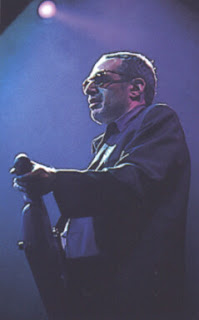 Why The Keytar's The Star Again

"In every genre from jazz-fusion to hair metal, the keytar – the keyboard-with-a-handle, worn suspended, guitar-like, from a shoulder-strap – once reigned supreme, sported by countless ticklers of plastic ivory, including Herbie Hancock, Devo, Pet Shop Boys, Asia, Steely Dan and Jean Michel Jarre. . . ."
- posted by cjb @ 11:46 AM