"CJB tries his hand at a virtual forest management test (a little screen with a forest that you plant and then harvest). "Harvest Now?" the screen asks. "No," says CJB again and again, eventually growing an enormous jungle, losing millions of virtual dollars and dragging his virtual logging community into financial ruin. On the way out there are tiny little Weyerhaeuser pamphlets available, printed on earthy brown paper and filled with delicate zen ink drawings of birds, trees and chainsaws."
- posted by cjb @ 7:49 PM

First off, a distribution missed while tooling around the Pacific Northwest with Jamie and the cats:

Out of curiosity, I spent twenty minutes with the stats, wondering how the portfolio's recent performance would compare with the TSE 300's. I've read numerous books and academic studies that suggest that a low P/E (price-to-earnings) ratio portfolio will actually perform better in bear markets than in times of market euphoria, and I thought I'd anecdotally test my "book learning."

Relative result: 13.07% A small improvement in performance, despite the Market Carnage.

The concept of Market Carnage is worth thinking through. Let's say I bought a piece of recreational property -- an unimproved lot in Gold Bridge, say -- for $10,000 on January 1st. Then today I call a realtor and learn that the most anyone will offer me for the lot is $7400. Have I lost money? Only if I have to sell today. Otherwise, the realtor's offer is mine to take or leave. And unless I'm impelled to sell, I have many years of vacations to look forward to, endless days of reading and solitaire in a tent with the Incredible Talking Cats and various loved ones, with vicious horseflies buzzing around outside and showers rattling off the roof. (Not to mention the property's slow appreciation over the full duration of my holding period -- thirty or forty years minimum, or the old Buffetesque "forever"). I've always liked watching things grow.

Why would I sell my property today? Maybe because a computer told me to. Maybe because my margin loans were being called, because my holdings, at least on paper, had fallen in value. Or maybe because I was leveraged up the ass. But as an individual, I have the opportunity of declining all the bells and whistles of modern finance. I can simply focus on growing a portfolio of solid businesses with (largely) predictable operating results, without any regard to program trading, buying on margin, leveraging my equity, trading derivatives or risk, or other kinds of foolishness designed to goose short term performance at the expense of individual control.

Well-regarded Australian literary publisher reasonably responds: "I have to say that my initial response on reading your letter as to how you propose to 'manage' your business in the future was one of voluble hilarity, I literally burst out laughing aloud. My second response was to note the unmitigated arrogance of your communication, I could not actually believe I was reading an official letter from Angus & Robertson on an Angus & Robertson letterhead."

The Cheese Does The Fancy Steps

Everything that's good about the series, compressed into two and a half minutes. For my pal K., proud owner of Season One on DVD.
- posted by cjb @ 9:08 PM 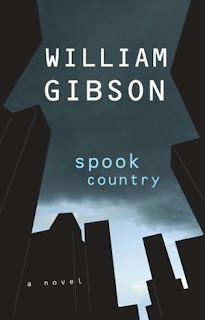 (To be inserted, a la Dr. No, between the third and fourth paragraphs on page 283 of William Gibson's excellent Spook Country. For Rodney and Bill, with much respect and affection).

She opened the PowerBook on the passenger seat and paged down a useless list of locked wireless networks, Vancouver evidently less trusting than L.A.

Out of the car. She strolled south up Main, past a vacant unit on the corner, an art supply store, mailbox rentals, comic books, the bistro's smoked glass windows. Then in, on a whim, at the bookstore. Grey industrial carpet and racks of new releases mixed with texts on Soviet architecture, photoconceptualism, the Strugatsky brothers, Stanislaw Lem. Old Bowie on the stereo. Two bald, prematurely middle-aged men loudly arguing at the till.

Now they stopped as she approached.

"Do you have a phone book I could borrow?"

"Sure," said the skinnier of the two, and heaved it up onto the counter.

She took her phone out of her purse and began to thumb through the listings.

"You looking for a business?" asked the skinny man.

"No, an artist. Bobby Chombo."

"Bobby," said the man. She studied him more closely. Late thirties. Mostly bald. Bright blue eyes behind small clear lenses. A round, earnest face. "We showed him, once."

"Want to see the gallery?" Without waiting for an answer he walked abruptly into a side room, returning seconds later with a key, and past her out into the street. Confused, she followed him out onto the sidewalk and down a few doors to a set of stairs leading up to the building's second floor.

"CSA showed one of Robert's earliest locative pieces," said the bald man, preceding her up the stairs.

Down a dark hall to a locked door. He fumbled with the key, finally opened it. Behind the door, a tiny exhibition space with a tiger-striped hardwood floor and white walls. Small black and white photographs hanging there.

"I haven't seen Bobby in more than two years," he said. "Just installed his work and took off. Didn't even make the opening. I told Sarah--"

"Sure," he said. "Still the same place. That rat trap off Clark."

"You wouldn't have the address, would you?"

Just a reminder that Pulpfiction will be hosting a free reading and signing by Seattle novelist Matt Ruff (Bad Monkeys; Fool on the Hill; Set This House in Order; Sewer, Gas & Electric) next Thursday, August 16th, at 7pm sharp.

Mr. Ruff's appearance marks the first time I've ever hassled a non-Vancouverite into appearing in the front room, and everyone's attendance and participation is warmly invited. Hint, hint.
- posted by cjb @ 8:52 PM

"Some detainees held by the C.I.A. claimed that their cells were bombarded with deafening sound twenty-fours hours a day for weeks, and even months. One detainee, Binyam Mohamed, who is now in Guantánamo, told his lawyer, Clive Stafford Smith, that speakers blared music into his cell while he was handcuffed. Detainees recalled the sound as ranging from ghoulish laughter, 'like the soundtrack from a horror film,' to ear-splitting rap anthems. Stafford Smith said that his client found the psychological torture more intolerable than the physical abuse that he said he had been previously subjected to in Morocco, where, he said, local intelligence agents had sliced him with a razor blade. 'The C.I.A. worked people day and night for months,' Stafford Smith quoted Binyam Mohamed as saying. 'Plenty lost their minds. I could hear people knocking their heads against the walls and doors, screaming their heads off.'

Professor Kassem said his Yemeni client, Kazimi, had told him that, during his incarceration in the Dark Prison, he attempted suicide three times, by ramming his head into the walls. 'He did it until he lost consciousness,' Kassem said. 'Then they stitched him back up. So he did it again. The next time, he woke up, he was chained, and they’d given him tranquillizers. He asked to go to the bathroom, and then he did it again.' This last time, Kazimi was given more tranquillizers, and chained in a more confining manner."
- posted by cjb @ 7:55 PM
Monday, August 06, 2007 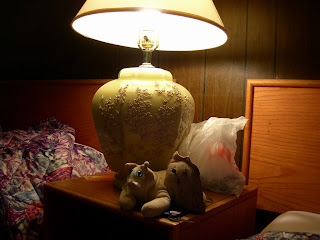 LOST GAL [buying books]: These were my second choice.

LOST GAL: It doesn't matter. You don't have it.

CJB: No, really. What were you looking for?

CJB [visualizing big stack of Vintage trade paperbacks in the overstock room]: I can go pull one out of the back for you!

CJB: Really! It's no problem!

LOST GAL [oblivious]: I was also looking for One Hundred Years of Solitude.

CJB [recalling copy he shelved less than an hour ago]: In pocket paper...in classics.

LOST GAL [that voice again]: No, you don't have it.