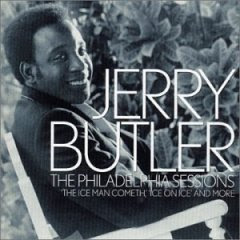 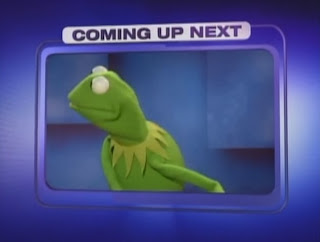 KERMIT: Are we ready back there?

VOICE [off]: Who wants to know?

Some cost-conscious individual writes to ask, "What's your cost to produce each Free print?" 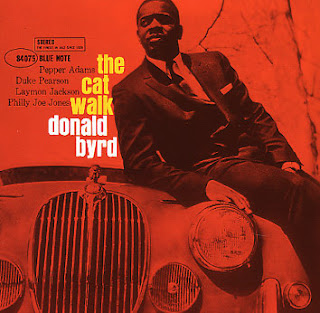 An excerpt from that Simpleposie debate (below), just to whet the appetite:

"I think government does some things very well (health care, social services, etc.) and other things less well (environmental care and rehabilitation, urban planning, etc.) I'd put government involvement in visual art in the 'less well' camp. In general, I think government's involvement in visual art involves misallocating money in a fundamentally flawed way. It's hard to underscore the amount of revulsion I feel for this system, particularly the made-in-Canada-since-the-60s model. If you want me to start listing problems, I'd begin with the idea of 'artist-run culture' in the first place. According to its rules, I, as a much younger person interested in art, and curating art, could not find a place inside that system, because I was not an artist. My place, apparently, was to write reviews, or to buy art, but never to curate it or organize exhibitions or direct an exhibition program, because those jobs were performed by curators who were themselves artists. Back of the bus! Or, more accurately, a game of musical chairs, where everyone has to sit in a chair when the music stops. The people I always felt closest to -- Judd; Smithson; Dan Graham; Ian Wallace -- always did many things simultaneously; they were never content to sit in a single chair. So, the majority of my career has been spent building an alternative to the existing state of things, so I can perform the jobs which give me great pleasure and intellectual satisfaction, but which, in Canada at least, I was never 'qualified' to perform. So, your idea of objecting to [the Western Front]'s [whiskey] still, or Leonard [Cohen]'s Greek real estate, & etc., strikes me as kind of funny. I don't want to correct or fine-tune the existing system, I want to starve it, dynamite it, seed the smoking rubble with salt, and start over. I'll be a bit inflammatory and say that federally funded artist-run culture evokes the same feelings of moral revulsion in me as the current war in Iraq. I don't want to to adjust force levels, I want the troops home and the current Republican gang who got them there gone."
- posted by cjb @ 11:39 AM 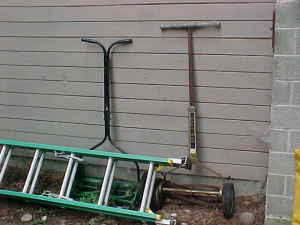 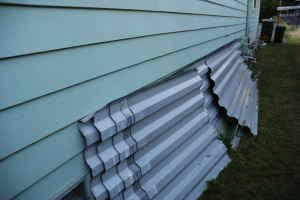 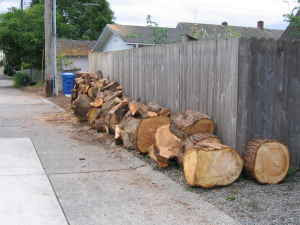 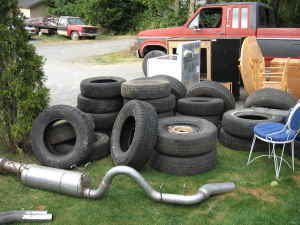 That's it for Free, with that Music in the Tuileries / Tattoos and Shadows chair and the frowning ghost formed by those two on-their-side tires and that munched tailpipe a nice note to go out on. Thanks to everyone who wrote with directions to free goods all over the Lower Mainland. I am going to spend August making the work's next incarnation: two largeish (24" x 30") "working" collages (lightjet prints on watercolor board, with additions of wax, gesso, acrylic, charcoal, coffee stains, etc.) "Unique, edition of two." Next up, a "cleaned-up" lightjet print made in Photoshop, edition 10 5, 2 AP, also approx. 24" x 30". The collages are already spoken for. The prints are $350 CDN unframed, first come, first served.

Q: Isn't it kind of presumptuous to flog your own work?

A: No, it's an important part of the work's transformation of "valueless" content into economic surplus. If the prints are given away, the project doesn't work. Free content plus unpaid labor equals negative surplus.

Q: Is this some sort of Marxist scam?

A: I'm reading Capital right now. But no, I'm not a Marxist. My personal politics, which I hope are separate from, or complicated by, my aesthetics, can be loosely characterized as small-L libertarian. (For an instance of my politics and aesthetics in action, see this debate with Simpleposie's Jennifer McMackon, on the role of government subsidies for the arts).

Q: Will you consider trades for prints?

A: That's interesting. An aesthetic IPO! So, even though I've fixed the work's offering price, trades would mean that I might receive additional surplus, or less, based on other artists' subjective assessments of my work.

Q: Are you ever going to quit making stuff?

"[T]he vast majority of great individual fortunes built in this country [sic], especially by Wall Streeters and corporate executives, were not built by people who took investment risks. Rather, the secret to building a great fortune is to avoid, as completely as possible, the taking of any investment risk."
- posted by cjb @ 6:35 PM

A conversation at the counter:

IRRITATED FEMALE CUSTOMER: Why is this $4.75?

IFC: I don't care what the computer says. Your sign-- [to CJB] What do you think?

CJB: Your sandwich should be free, and her boss should be fired.
- posted by cjb @ 4:24 PM

MORTGAGE INVESTMENT OPPORTUNITY. 12% INTEREST P.A., PAID MONTHLY, SECURED BY FOUR PRIME DOWNTOWN PROPERTIES. (Sign across the street, visible high up through the rain, umbrellas on the sidewalk, bus roofs running with water). Apparently everything is PRIME to a commercial leasing agent. That crack den on the corner, with the boarded-up windows, fire scars, and nagging piss-smell? PRIME! The "lower level" of the building on Sixth Street, which John and I investigated yesterday, only to discover that it was more accurately described as the "basement," windowless, invisible from the street, and reached by a narrow cattle-chute of stairs, also smelling of piss? PRIME! Those scrubby pines and muskeg by the side of the Duke Point Highway? LOCATION, LOCATION, LOCATION! PRIME! The sad mall in Surrey, with the 1200-square-foot storefront tucked away behind the Cash Store, the Vietnamese grocery, and the shop selling Hindi karaoke discs? PRIME! Howard Ursuliak city, baby.
- posted by cjb @ 4:16 PM

Raining and humid, like Toronto in September. Filmed-up windows of the bus, the Internet cafe. 80s electronica on the stereo, that track you've heard before but can't quite recall the name of, perfectly spaced computer drumming, electronic glitches and bleeps, the accidental static "texture" of the not-quite-perfectly-tuned FM channel. Incognito in my beige canvas Eddie Bauer ballcap, the perfect piece of fashion camoflage, so middlebrow as to be totally inobtrusive, like fabric that bends light. Outside, a Chinese couple dodge through the stalled traffic carrying red clay pots full of tall white orchids.
- posted by cjb @ 3:05 PM
Tuesday, July 17, 2007

They shifted the statues for harboring ghosts
Reddened their necks, collared their clothes
Then we danced the dance till the menace got out
She gathered the corners and called it her gown....
- posted by cjb @ 11:32 PM
Monday, July 16, 2007

Hello, my name is Sylvia. I'm a friend of James Nadiger's. A while ago he recommended me your blog and I've been enjoying it ever since. I was particularly taken by your recent post on The Sheltering Sky and off-ramp troubles - I am quite interested in Bowles and am partial to that ferry ride.

I came across the [attached PDF] on Bowles' work and earlier this year. I thought I'd pass it along as it seemed to me a particularly interesting take on the author, his art, and his place in American culture.

On a completely different note, thank you for recommending Ratatouille. My boyfriend and I caught it last night and we were delighted. We probably would have passed it by, but seeing as both you AND Robin Bougie had sung its praises, we figured we had to go.

Thank you for making the blogosphere a little more interesting. 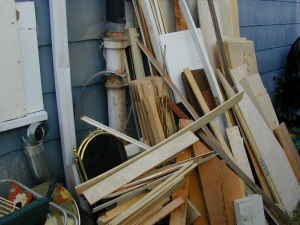 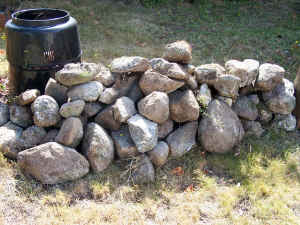 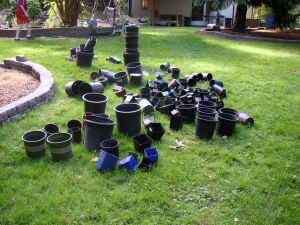 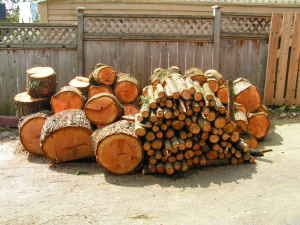 I Saw Her in the Anti-War Demonstration
Words and music by Jens Lekman, apparently channeling Jonathan Richman

Strings, handclaps, the whole nine yards, turning the corner by the Bayshore to look back at the expansion's neo-Constructivist fretwork in the last light, seaplanes landing, electric candleflames leaping in the windows of Liz's shed, Raven's glittering eyes. . . .

You're looking for me in the demonstration
Well I have already lost patience
And you might find me sitting by the pavement
Or maybe not, 'cause I have shrunk
I fell in love with a punk and she took my breath

I saw her in the anti war demonstration
It was a sweet sensation of love
Ah...
Love...

When I was sixteen I hang out with the kids who liked it
The kind of punks that were born in leather jackets
The kind of punks who placed themselves in brackets
And she was one of them, back then she was somebody's girlfriend
And I was no one, I had nothing

Q: Did I really see you repeatedly walking in and out of the Fox Cinema?

A: Yes, in the course of helping an artist pal with her latest video project. But I'm "in character," not just idly checking out the show.
- posted by cjb @ 10:41 AM 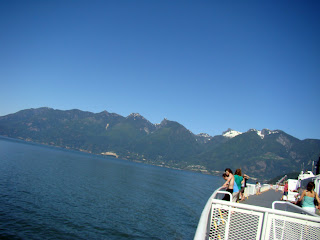 Fellow blogger, photographer, long-distance walker and occasional hiking pal Keefer accidentally took this shot last week in the middle of Howe Sound. Unremarkable, until you notice the seated figure reading The Sheltering Sky in the middle distance.
- posted by cjb @ 10:33 AM 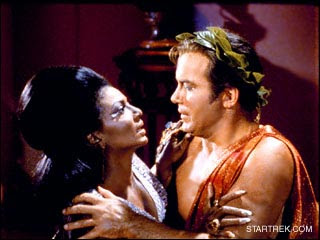 You said, "You’re not like the rest"
(Oleander holly)
And I nodded
(Crimson feet of Collie)
"No one understands me,"
You said
And I nodded once again,
(Beautiful and lovely)
As if to agree that all men
Are indeed the same
(My baby)
Somehow, you said,
(The only one)
I was different
(Who really understands me)

And I went in for the kill
(Who really understands you)
I'd read the same books
(Tell me pretty stories)
I'd learned to ape the motions
Of a "sensitive" human being
(Say you understand me)
And we were "oh-so-happy,"
(My baby)
But you found things to fix
(The things you want to see)
And I knew it was time
To move on
(That I could never be)
(In love)
(In love)

So now you have me
Completely figured out!
You feel sorry for me!
I can't "express my feelings,"
I can't tell the truth:
We are all alike

At puberty I was sworn to secrecy
By the international brotherhood
Of lying fickle males
I can't tell you anything
And I can't commit!

(Hold me in the morning)
I will always treasure
Our time together
(Tell me pretty stories)
I don't feel enough of anything
To harbor the kind of disdain
(Say that you're the only one)
That you'll maintain
You painted me into what you
(My baby)
Wanted to see,
And that's fine,
(But I could never be)
But you will never know me
(In love)
(In love)

(Oleander holly)
(Crimson feet of Collie)
(Beautiful and lovely)
(My baby)
(The only one)
(Who really understands me)
- posted by cjb @ 10:03 AM

A quick portfolio fix, based on setting up the initial portfolio on the laptop on the front desk on a 35 degree cloudless afternoon. Mea culpa!

Sunday morning with my portable electric fan and pocket calculator: